Just Remember to Breathe
This one ended up being almost everything I hoped for. It was another one of those introspective yet gentle reads that still managed to deeply affect me. I fluctuated between moments of happiness, hope and delighting in their sweet moments, to sadness, and wondering if it could really ever… just “be”. And yet, I felt as if I had a deep understanding of where the character’s doubts were coming from. On the outside looking in, I could tell where they were hurting themselves, and in turn, each other. And yet, I would have likely been on that very same wavelength had it been me.

Their emotional turmoil never let me fully rest, but it managed to do so without turning my world upside down. Oh sure… it got bad at times, but on a real-life level. On a level that forced them to come to grips, and make decisions to try and let go. Take the bad experiences, memories and fears, and use them to grow. Individually, and possibly… together. But you know how it goes. Easier said, than done.

So what’s it about? Alex (the heroine) and Dylan (our hero in every sense) met on a student trip to Israel at the age of 16. They became close and had a whirlwind, sweet (and brief) romance, but when it came time to go home (living so far from each other), they went their separate ways. Heartbreak #1. But their deep connection continued as they stayed in touch over the years (including when he enlisted in the military and she went to college). But distance… well. It makes the heart hurt. And the mind work overtime.

She was busy making plans for “us” and I was trying my hardest to keep my distance. Maintaining that distance was killing me. I loved her, but lets be honest. Part of me hated her too.

Life changes for them both. Drastically, as they find themselves going to the same college (after their latest and worst heartbreak of them all). And worse than that, he has to deal with his own personal war-related trauma infiltrating and affecting every aspect of his life.

Columbia apparently has a soft spot for reformed dropouts and combat veterans. So here I was, and it was the first day of classes, and I was pent up, tense as all hell, because the one person in the word I didn’t want to see, the one person I wanted to see the most, all at the same time, well, she was here.

But really? The way I’ve described it doesn’t do this book justice. My description almost sounds trite, when in fact, this story has depth.

Because not only does Dylan have a tumultuous past that has sculpted who he is today, but at war, he has seen and experienced things that nobody who hasn’t been there, could ever understand.

“Along with the gimp leg, I’m technically diagnosed with Post Traumatic Stress Disorder. And traumatic brain injury. Got my brainpan rattled when the bomb went off, you know? It’s all labels, anyway.”

I frowned. “I’m just… I’m not exactly the guy you knew, Alex. Sometimes things here… they don’t seem as… as real. As it was over there. Maybe I’ve become an adrenaline junkie. Reality isn’t colorful enough for me.”

He blames himself. For a lot.

No. My synopsis simply cannot do these characters justice.

“Okay.” Her face was twitching, and it was obvious she was holding back a tear.

“Look,” I said. “This sucks. But we’ll be okay, all right? It’s only a few hours a week, anyway. What we had… it was another world. We were in a foreign country, being exposed to all kinds of amazing stuff. We weren’t ourselves, our real selves. It was…. It was fantasy. A beautiful fantasy, but fiction all the same, okay?”

Everything from the way these characters met, to their on and off again relationship (and the reasoning behind the “on and off”) made sense. The misunderstandings, the perception of certain things, their reactions. Real. From character interaction to little details (or “touches”) …

“I think we need one more rule.”

He took a deep breath through his nose and said, “Yeah. Um, yeah… you need to get a different shampoo.”

“What are you talking about?” I asked, suddenly uncomfortable.

“You still smell like strawberries, and it’s breaking my heart,” he said, his voice a low growl.

… this book had me sitting right there with them. I wanted to cuddle and cry (and sniff) with them both! (Hey! I like the smell of strawberries too! 😛 )

Maryse’s Book Blog: I chose the perfect book for today! A “New Adult” story about an injured veteran that just got back from Afghanistan, and is now attending the same college as the one who broke his heart. Or did he break hers? But there’s so much more to it than that, as he copes with his own emotional, mental and physical turmoil.

Angelica: Aw I read this one and loved it! Hope you enjoy it 🙂

Teresa: A really good book! I want to read more New Adult books from this author.

Mackenze: I read this a couple weeks ago. It was great…4.5 stars. I shed a lot of tears!

Kirsten: Maryse I told you I <3 this book! Great choice.

Tracy: I have read this. Great book!

Charles Sheehan-Miles: All of you (especially Maryse) are my favorite people in the world right now. Seriously.

Cassie: Made my day to see this post about such a great book, just got even better when I saw the author leave a comment! Nicely done Mr. Sheehan-Miles 🙂

Maryse’s Book Blog: I LOVED the index cards!!! And when she was taking each one from him… *sniff* that was a sweet detail that I could see (and would have done if it were me).

Telling and heartfelt. Graceful. A romance novel written by a man, and… I loved it.

Why not 5 stars? I… hrmmm… *shoulders sag*. I would almost say, that the ending…. *squinches mouth to the side*.  *sigh* No. It’s really good. But, considering the patient pace in which the story was told and subtle detail throughout, I almost felt as if the very end (and I mean the actual ending) was fleeting. Rushed. There was something… missing. I lost my breath many times while reading this, but the end was almost… *shrug*, compared the the rest of the book. Or maybe it was me. I was finally “there” and maybe I raced through it? But either way, that pretty much means that the rest of the book was… extraordinary, so that works, right? 😉

P.S. Julia’s book is next!! It will be called “A Song for Julia”. Rock star story, anybody? Yep. I think me ‘n this series are gonna be best friends!!! 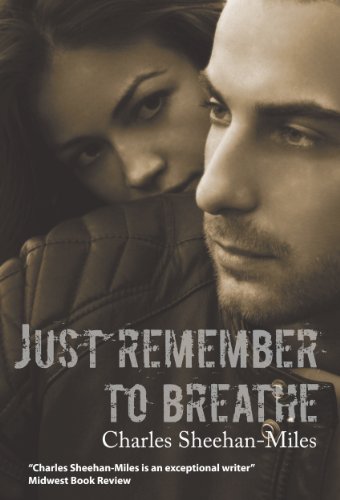 Guy on the cover… Bradley Cooper or Seth Green?

Haha! Omg! I thought he looked like Bradley Cooper!

I started reading this yesterday after I finished “leave me breathless”. I’ve just finished it. It was a good read but definitely not a fantastic read ( probably because of what I’d just finished reading). I’m a sucker for romance which it had but did find it a little predictable with not enough angst for me. I like a book that makes me not want to put it down because I am desperate to know what happens next. It had some of that but definitely not enough. Sorry.
So what’s next on the reading list???? Lol

Maryse, thank you for recommending this book. I just started reading it last night. And I agree, the guy on the cover looks like Bradley Cooper.

Just saw that this book is now $0.99 on amazon! Looks like I just found my next read 🙂

While I really did like this book there were a few things that bothered me. First if all, her last name was Thompson but a few times it said Thomas. It also talked about her five sisters but there were only ever 4 discussed (name wise). I learned in the 2nd book the youngest and her name but where was she in this book?!? I have no idea why those things bothered me but they really did :). I agree about the ending feeling rushed. Aside from those things I did love this book!

Thank you! I have been googling this book to see who the guy was on the cover and you’re the only one I read that mentioned it. And that’s exactly it, he looks just so much like Bradley Cooper!! Thanks again because it was driving me nuts. You have saved my sanity!!!

The TUESDAY NEW RELEASE LIST is ready. Come see what I highlighted and what gave me the biggest blurb jolts!

Maryse just finished reading Rock Chick by Kristen Ashley and it was a fantastic read!!! Full of sass, funny and feel good!

Here is the series reading order (and all of the love for this series) AND the latest release all linked up.Coming June 2nd, the final book in the number 1 Bestselling Paranormal series, The Fae Chronicles!
Secrets are unraveling, and the end is near. Join us for the battle for Faery!
My author group is in the comments, for those not seeing me! Join, and come hang out and never miss another update! ... See MoreSee Less

I totally forgot that this series wasn't finished. I guess that I will have to read the previous 5 books again so that I can get back up to speed as to what is happening.

BREAKING NEWS UPDATE!! Nightfall (Devil's Night #4) by Penelope Douglas IS UP FOR PREORDER!!

HERE IS THE SERIES READING ORDER AND the preorder - all linked up:

One of last week's READER QUESTIONS has been SOLVED!

In case you wanted to know it too, I included it in the first comment: ... See MoreSee Less

MONDAY EARLY BIRDS ARE UP! Look what went live over the last 24hours.

Also... what I chose for this month's Amazon First Reads. 🙂 What about you?

Big Mary Burton fan, I am so excited she has a book part of First Reads and havent read her in a few years. So I will be going with her book this time. This is the earliest I have made a decision for the First Reads.