Killing Sarai
Gorgeous cover, intriguing title, but it’s the “bad guy” premise of this book that got my attention. Well, that… and the fact that this was J.A. Redmerski’s newest release and we all know how crazy I went over another one of her books. And although this one’s premise was quite different, it looked like it might have that “taboo” quality to it. Going from the clutches of one bad guy (a Mexican druglord) to another bad guy that was there to deal a “hit”.

So what’s so “taboo” about that? Well, you knoowwwww… falling for the bad guy. ‘Cause that, too, was hinted at in the synopsis. Love between a kidnap victim and a killer. I mean, who does that? Me! That’s who. In my books, though. 😉 Give me that kind of “romance adrenaline rush” any day, ’cause we all know it won’t be easy. Trials and tribulations, more bad guys and bullets, and the “partners” that insist that lover-boy dump (read: kill) his load.

“You think you’ve enchanted him somehow with your innocent girlish wiles. You’ve done nothing of the sort, just so you know. Victor, everything he does, he does it for the better of our Order.”

So says you, Niklas! *hrmph* Nothing better than a cold killer heart that has just warmed up for the first time ever. So fun!!

Yep, you know what I’m talking about. The whole “I like her but I must kill her…” dilemma. Ahhhhh decisions, decisions. What to do…. what.to.do? And that’s where I come along reading as fast and as furious as their escapes, because I love that kind of angst.

And I really enjoyed this one, especially the first half. Nicely detailed in her memories, her fear and her escape (although I was  certainly curious about this Javier guy. The original bad-guy obsessed with her). I would have loved a more intricate look into that story, as she did think about a few memories, that gave them a certain reality that I didn’t expect. It wasn’t just hostage, when it came to Javier’s attention to Sarai. There was a touch more hinted at. Maybe more detail to come?

I was brought here a long time ago… by my mother. Javier saw something in me he didn’t see in the other girls. I call it sickening obsession, he calls it love.

But I was even more curious about Victor (bad-guy #2). I liked that I could completely sense his no-nonsense professional demeanor.

“Are you even human?” I hate him more every time he speaks. “What kind of man would not want to help a defenseless young woman out of a life of bondage and violence, especially when she has escaped her captors and is directly pleading for your help?”

His “calm” even within the storm and his amazing ability to avoid, escape or just “win” any situation that came along. But I especially enjoyed his internal struggle of doing what he’s been taught to do, what he’s always done and yet still trying to find a way to deal with this new situation.

I liked it, however, I wanted to like it even more. The story was fairly well-rounded and I was into it, but there were a few parts that seemed a bit… over the top in terms of the bad-guy scheming. Plans, hits and situations that I didn’t quite believe, but since I was more into the potential (<— keyword) love story anyway, I just “went with it” when it came to the bad-guy stuff.

But overall, I was missing a certain amount of detail for me to truly connect to the characters. I enjoyed watching their story play out and was curious where it would go, but read it with an almost “movie-like” quality where once the movie ends, I shrug and go, “That was cool”. But then look for something more… intense. YES!! That’s what was missing for me. Intensity.

While there were obvious moments of danger/attraction/threat/and personal interactions, I think only the “danger” part got my adrenaline pumping. Not so much the potential love story, and since I’m a romance reader, no matter what the book’s other genre is, I want to feel in love and all swoon-y. And it was there. I was feeling it… a bit. I wanted to feel it A LOT.

Maybe deep down I know that I’m going to be killed and that last desperate part of me wants to know before I die that someone cares. That Victor cares. Because he really is the only person in the world that I have.

Perhaps that’s coming though, as there will be a book #2. Cliffhanger? Ummm… well. Not like our usual cliffhangers. The end of this one didn’t have me gasping or wanting to throw my e-reader. But there is certainly more to this story, and yes, I do intend on continuing their journey, ’cause this author can truly write romantic intensity and angst. So… I have a feeling there will be much more to this “right up my alley” love story. 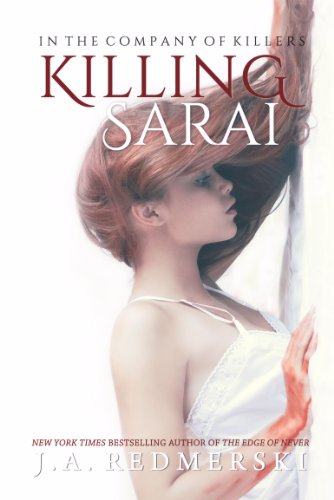 Completely agree with your review. Really like the first half and wished it kept going in that direction. And your right, it would have been a great if she would have shown us more of Sarai and Javier s relationship, and how it began. I kept waiting for the “love” part of the story to pick up , but it didn’t pick up the way I wldve liked. I really love this authors writing and I’m hoping the second book really brings it full circle and I get what I lacked in the first.

Yep, good writing.. but I needed that *oomph* to really put me over the edge. Still, it’s not over until it’s over so I can’t wait to see what she comes up with next. 😀

Just finished it and it was a good story with good writing, but I didn’t fall for Victor. I don’t think I swooned even one time. I am interested to see where this goes, but I wonder if months from now when the second book comes out if this first book will have been enough to keep my interest that long. Does that make any sense? Well in my head it did!

I enjoyed the book but, feel the second book is going to close the circle. The author is good writer, I read On the Edge of never and I really enjoyed. I am looking forward to reading Reviving Izabel.

I totally loved Killing Sarai! Yes, I wanted the romance to happen sooner, but when his feelings started to change for Sarai, my heart just went reeling! Sarai is so tortured and has been dealt such a crappy hand, that I wanted Victor for her as much as she wanted him for himself! I am waiting on pins and needles for the next book!
Oh, and I loved the sneak peek at “The Edge of Always.” I missed Andrew and Camryn and can’t wait read more of their story!

as usual completely agree with u, first half had me, second half, i just didn’t feel it, not enough connection between the two, but still a good book

This book is now on .99 on Amazon for Kindle download.

Sadly, I pre-ordered this book and read it upon receipt. I was so disappointed. I did not enjoy this story. At all. And it saddened me because I loved The Edge of Never. This book is not even remotely anything like that–not that I expected it to be, but like you said, I did not connect and there was no wow. I dragged thru this book. 🙁