Lev: a Shot Callers novel
Well I must say… Lev is hot! No doubt about it, he’s the alpha-male protector of our dreams. A sweet, silent and deadly angel that has a seriously dangerous side. He’s broken. We kinda wanna fix him. But he’s kind of perfect, in his imperfections… so I just wanna pretend I wanna fix him, but I love him just the way he is.

Maryse’s Book Blog: Yep I’m reading it as we speak!! 😀

Jeannette: I loved it!!!

Veronica : It’s a super read! Loved it! I also read her other book RAW and highly recommend it!

Teresa: I loved this book to Maryse its on my keeper list.

Rebecca: I’m reading it right now. I am in love with Lev!

And her? Well… she, and the whole book actually, has a bit of that Kristen Ashley feel that we are so often looking for. And mostly in its version of “that one woman/stranger” that comes into people’s lives and just by her pure nature, seems to accidentally fix a lot of wrongs in a family (or a few families), for that matter.

It starts off in true “KA-feel” fashion. The heroine is struggling to survive, she suffered her share of prejudice and emotional abuse. Dejected, and at a low point (in this case, her lowest point) in life, she is forced to do something against her better judgement, but not because she’s a bad person.

I was sick of being me. Mina was friendly, and honest, and kind. Being me got me nowhere. I was floating down sh!t creek without a paddle.

But because it appears to be her only choice. And then there’s that one alpha-male that finds her, and helps her (even though it might “normally” be against HIS better judgement).

When she looked up at me, she blinked away tears and whispered a trembling, “I just wanted something to eat.”

A wave of emotion ran through me. First, anger, then sadness, then something I couldn’t quite explain. Protectiveness, perhaps. “You’re hungry.” A statement, not a question.

She nodded once more and it was done. The girl had unexpectedly become my responsibility.

Awwwwww!!!! I loved that scene! That connection is there. That soul-recognition (well, those are my words, anyway) that even though THEY don’t think anything “more” of it, it’s obviously there. Both are so good, and so good for each other. For the first time in a while, he feels something for someone (other than his baby daughter). Oh yes. Did I mention… he’s a single father? 😉

“You believe in love the verb. Not love the word.” His face spun and he looked at me as if he was shocked I understood. I added, “Love, the action. Not love, the watery emotion.”

I could love you, Lev Leokov.

And what I loved about this one (other than his strange, aloof, moody-brooding, shyness of an alpha-male type, which I love), is that this one did have that slow burn. They both were so obviously attracted to one another, but due to his “inability to understand feelings and love” (I think he has Aspergers Syndrome or something like that), and her extreme lack of self confidence and worth, they just cared for each other, when the other would allow it.

“You saved my life.” He didn’t hug me back, but he reached up and stroked my hair kindly.

“I would do it all over again, mouse.”

They wouldn’t even sleep together. In the same room? Yes! After all, he didn’t fully trust her, so he had to keep an eye on her. Okay and maybe the occasional comforting cuddling, but it was soooooooooo sweet!

Warmth flooded me, leaving me in a haze of wonder. What had I done so well in my life that I’d come across Lev Leokov? Whatever it was, I was thankful for it.

Of course, there were the very funny moments that had me laughing out loud (usually Lev’s reactions to certain situations, or when he’d introduce her to people *snort*), and there were plenty of those.

So overall all, I enjoyed it! However, I didn’t find it as “deep” and emotionally taxing as I was hoping it might be. Not as hardcore, considering the blurb, and the circumstances of the story (Russian mafia-ish royalty descendants that are running a strip club here in the U.S… Lev being the enforcer). And her, living on the streets for SO long, and then coming into their lives. You’ve got the opposing Russian family, the expectations, the blackmailing, the crazy ex/mother of his child and all of her threats, and the new girl (our heroine) that the little child obviously is getting so attached to. You’ve got the prospective girls so interested in our hero, and of course, the men up to no good. A mystery to solve, a few past issues to confront and get closure on, etc…

It’s a lot of stuff packed into a book, and while everything comes full circle, and there’s lots of resolution and good-feels, even amongst the family saga drama, I  didn’t connect to it as much as I expected to, especially the second half of it. I dunno if it was that I found it far-fetched, or rushed, or if she was just too angelic and perfect and happy, considering the dark life she lived? Or maybe, overall? It was just a bit much, and too wrapped up in a bow? But there was something missing, for me, as I read it. I chuckled. I laughed out loud:

Anika spoke quietly to herself. “Oh, God, she didn’t know.” Then she covered her mouth with her hand and giggled. “She didn’t know!”

They laughed loudly, whooping and doubling over. And there I was, howling as tears trailed down my cheeks. “Am I fired?” “No,” Nas uttered through a chuckle.

I didn’t believe her. I threw my head back and wailed, “But Sasha won’t care.” I took in a deep stuttering breath and blurted out, “Because he’s an a$$hole!”

From behind me came a calm, “Please, Mina. Don’t hold back. Tell me how you really feel.”

OMG she’s totally busted!! This scene was hilarious (as were quite a few others!).

I highlighted tons of parts. I swooned. But even with all that… I didn’t go crazy for it. *sigh*

This man thought he had the right to touch my mouse?

No one had the right to touch my mouse.

I found her, and I was keeping her. 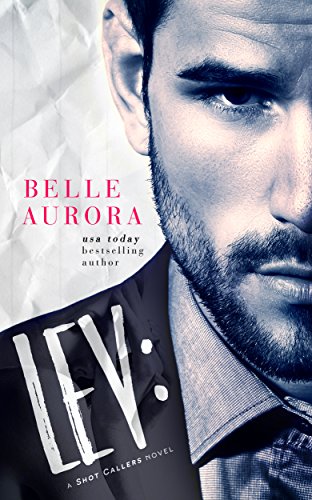 Great review Maryse! I just loved Lev so much…..he just made the book for me!

Just finished this one! I really liked it…a lot! Thanks for the great review.

Just finished too. I really liked Lev. He felt different. I have to agree Maryse, I didn’t go crazy. And I really thought I would. I am curious though to what will happen with the other characters.

Yes it was definitely setting up for the rest of the family… poor Sasha. 😉

I think Sasha’s book will be good!

Yes most intrigued by Sasha.

The author just posted that Vik will be out late 2019, and Sasha will be out early 2020. Not sure about Alessio yet. 🙂

Where are the books on VIK, SASHA AND ALESSIO