Lover Eternal (Black Dagger Brotherhood, Book 2)
My third favorite of the series (although, truly it’s hard to pick, as each one was great fun, and have their own special moments)

This BOOK#2  focuses on the Vampire warrior “Rhage”. He appears to be one of the younger of the group, has the looks of a model/actor (aptly nicknamed by his brothers “Hollywood”). His persona is one of a playboy, constantly on the prowl for his next “sexual encounter”, never to be completely enthralled by one woman. Party boy, bad boy all around! His brothers consistently give him “props” for his sexual prowess. On the outside, he’s a stud, but on the inside lies the heart of a man who just wants to love and be loved…

Rhage also has another demon (a “real” one, actually). Although he is a fast and furious fighter, he will absolutely devastate/devour everything around him, if he is pushed to the brink, and accidentally allows his “monster” to escape (and when this happens, not even his brothers are safe).

Along comes “Mary” to the Brother’s compound (side-note: she has no idea where she actually is, but has travelled with friends for an “interview” of sorts). She is a sweet, normal, all around (self described as somewhat plain) girl next door, and 100% human (although suffering from a potentially deadly illness). While Rhage re-cooperates physically after one of his “monster” releases, he cannot see well, but can hear her beautiful voice, and is drawn to her.

For days (weeks?) pursues her aggressively, and although she is highly attracted to him (who wouldn’t be), her illness and insecurities keep holding her back.

While the battle rages on against the evil “Lessers/Lessening Society”, the biggest battle is one both Rhage and Mary must face in their own personal struggles, and the ones they have to face together.

We are also introduced, in this novel to two integral characters that appear throughout future books (John Matthew, a mute pre-transitional Vampire, who was orphaned and struggles living on his own, and “Bella” a beautiful vampire born in aristocracy, who is Mary’s best friend and neighbor).

Actually, some of my favorite scenes in this book, involve the interactions between Bella, Zsadist and Phury.

When Bella touched Phury’s beautiful hair and the whole party froze up watching Phury’s reaction to her:

“They’re not used to seeing me with…that is, no females…ah…”

When Bella went to touch Zsadist’s scar on his face:

In a flat cold voice he said, “Careful there, female. I bite”

Loved it! I love how the Vampires struggle with the integration of these “humans” into their surroundings (considering they usually aren’t very fond of humans in the first place). Very happy moments, very sad moments, I’m not telling you any more, other then this one really is an emotional roller coaster of sorts. 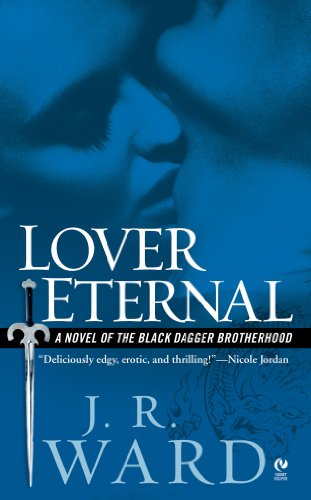 I liked the book loved thhat his tatoo winked at her after they had sex loved the ending but come on he’s been after her for so long and then goes out and has sex with some random chick and what does he say ‘let me hold you’ is he freakin kiddin and what does poor hurt and betrayed mary do, she has sex with him then feels guilty because she used him am I the only one confused here??