MC Chronicles: The Diary of Bink Cummings Vol 1: (Motorcycle Club Romance Novel)
Yep! I tackled another one from my latest TBR list. I couldn’t help myself but start this one next considering the HUGE love so many of our fellow readers have for this series. And I mean HUGE love.

It’s not even that “new” of a biker series (this book’s been out for almost a year, now in fact) but it appears it’s “new to us” ’cause so many are just now devouring it! Touting it as one of the absolute best biker series, marathon reading the entire series and delighting in its grit and rawness, just like we like ’em!

Shirley: Hi Maryse, I was wondering have you or anyone here read The Diary of Bink Cummings? Its a trilogy and all books have been released. The reviews are awesome and so many say its the best Motorcycle series, unputdownable. I believe this is a true story based on her life being raised in a motorcycle club. Just wondering if you have read it and what you thought.

Lauren: Shirley, I just read the entire Bink Cummings series IN A DAY this week & now I’m in a rut….I’ve started & stopped half a dozen books since I read it & NOT ONE can hold my attention. I absolutely loved it. Can’t WAIT for Big Dick’s POV book!!

Kelly: Maryse, started the Bink Cummings MC series. Finished book 1 and 1/2 way through 2. Loving it! I was looking for another series that wasn’t quite a romance – a bit more real and gritty. Found it. Worth checking out

Maryse: You guys are making me VERY excited to start this series…  😀

Jean: …all this talk about The Diary of Bink Cummings has me intrigued… Those reviews for the Bink books are impressive! Moving them onto my list…. which list? I’m not sure yet, but they are getting added somewhere!

MichelleS: Bink Cummings – I read the first two and need to get to book three. Love it. At first, I was thinking this is the best MC Club book ever – seriously – then there were a few writing kinds of things that got in the way of “best ever” – but it sure comes close. I love it so far. I know they say it is based on her real life, but maybe just loosely? And he’s 50 and names Big Dick and she’s 30 – and he helped raise her from when she was little? Controversial for sure. But I ate it up.

MichelleF: Honestly one of the best MC series I’ve read and I am a true lover of all things MC. On the plus side Binks is also a kick ass gal to get to know outside of the book world. I highly recommend you read this series and you will see.

MichelleS: What’s making you squirrelly? Bink Cummings? It really was good. I think it was that forbidden aspect – he helped raise her, and he’s so much older, and he’s BIG and the prez of the club and so it was gritty, and I liked the secondary characters too. I didn’t love how a couple of things just resloved themselves like POOF, but overall it was a good choice for when that mood strikes you.

Niki: I will be the broken record here and say I just finished the first Diary of Bink Cummings and oh my gosh!!! LOVE it!!!! I re-read my favorite parts before I even finished the book….and pretty sure I bookmarked almost every page!! So good!!!!

Robyn: I agree that Bink Cummings MC series is one of the best out there! She’s writing book 4 right now!… You need to read Bink’s Books. Loved Big Dick!

Shirley: I just started the 2nd book of Bink Cummings. It is very eye opening! Wow! I cant put the dang book down!

MichelleS: I ended up reading Bink Cummings Book3 as well, which means it obviously held my attention. It had it’s great parts and then some things I didn’t like. Mostly it was how anything that happened was forgiven too quickly, or major twists that got resolved too quickly. But just the day-to-day Bink and Big Dick and the gang and all those interactions? Yum.

Jean: So Maryse, how are you liking Bink? That one’s high on my TBR!

Maryse: Jean I’m 50% into Bink and I like it!!! That said, it is VERY crude and raw and gritty and some things (*cringe*… like for just one example… club whore things) are more detailed than I’d prefer… LOL!!!! AND AND!!! “Big” (her “hero” – I won’t say his whole name but you can imagine where I’m going with this, if I tell you his “real name” is Richard

) is PURE GROWLY ALPHA-MALE fun!!!! Oh he’s the crudest of ‘em all, no doubt, but I get a kick out of his claiming her. And they’ve been only “friends” (or “family”) for the whole first half, so a nice slow burn!!!

I totally get where you guys are coming from with this. It’s entertaining and a little raunchy. Er… I mean a lot “raunchy”.

Real life inside an MC and I’m telling you now… it’s no holds barred. Dirty in every way (even though there is a story going on). It can be shocking. Laden in crude and coarse scenes, thoughts and actions, so often jarring me out of the book, and thinking to myself… ew!! Like her unusual Harley-riding… ummm… results. Then again, I don’t ride, so maybe it’s not so unusual. 😉

Don’t get me wrong, I enjoy reading hardcore scenes and being uncomfortable if it makes the “world-building” real. I like it as real as it can get. I need it, in fact, to believe it. But this one at times? Whoa. LOL!!!

Narrated by 30-something year old Bink (that’s her by the way), as she writes her life story (and present emotional and club-attachment “dilemmas”) in her diary. And that’s pretty much it. There’s nothing really crazy going on (other than the forbidden-love aspect) in this book in terms of plot twists, or drama (okay some “club whore” and “old lady” drama, sure) but this is mostly just living the life of a woman that lives in a man’s world. And not one of “theirs”. As one of them.

“I’m the president and you’re our queen. Get used to it, and quit your bellyaching.”

Yeah… I got a kick out of the Prez at times. And the drama kicks in when she finds herself attracted to, and falling for said sexy, HUGE, bad-ass, 50 year old club president…

I grinned and had to hide my need to laugh when he said the word ‘cute.’ It just didn’t suit coming from the lips of a man who was properly road-named Big Dick, who also happened to be approximately six feet eight inches tall, and pushing three hundred pounds of tight, hard muscle, with tattoos that littered his scarred, tanned flesh.

… that at one time, she considered a father figure. ‘Cause you see, he’s always protected her from danger, taken care of her boo-boos, dropped her off and picked her up from the prom… you get the picture.

This is the same man who, when I was a tiny kid of like five and my dad, his VP, was out on a run, would sit on the couch in the common room and read me Rainbow Brite and Care Bear stories. The same man who knows how much I love Italian Ices, which he keeps the clubhouse fridge permanently stocked with.

And then she saw the *ahem* thing that he’s named after,

and her world changed.

We realize very quickly that she’s just as much of a bad-ass as the guys in the MC are. In fact, they recognize her as “their queen” even though she’s nobody’s “old lady”. She hasn’t even been claimed, and doesn’t want to be.

“Sometimes in life we don’t get a say in the things that we want or don’t. You’re Bink, you’re our girl. You might not have asked to be part of this life or to grow up in a place like this. But that’s what you got and there ain’t one man in that place who wouldn’t bleed for you. Especially Prez.”

Having been raised in the clubhouse (quite literally RAISED in it from a young age) she’s seen it all. Sexual debauchery right out in the open (it’s listed as comedy romance, but umm… no. Not to me, anyway. Oh it’s got its humor, but it’s significantly darker than that, and well… smutty. And yet “erotica” doesn’t seem to fit, either).

She’s been witness to violence, and their hardcore world in all of it’s gritty glory. Nothing was hidden from her, age and childhood be damned! And it’s just become second nature to her.

And this is her life… falling in love (although attempting to adamantly resist it) with her Prez.

“Am I that disgusting?” he emphasizes bitterly.

I bite back my reply, which would have sounded something like. ‘Um, no, you stupid a$$hole, you’re not disgusting. You’re hot. But you’re old enough to be my dad, and I don’t like that one damn bit. I also don’t like you thinking you can talk to me or order me around like this. It pisses me off.’ Yeah, it wouldn’t be best to smart off at this moment. So silence it is.

‘Cause prez makes no apologies when it comes to other women. Yeah… she’s not too pleased with that lifestyle, either.

Big’s eyes instantly find me, stern and hard as always. “Bike, Bink. Now.” He points to his hog.

*gasp* OH NO HE DIDN’T!! Oh wait… I kind of thrill over Bossy McAlphapants, so I can’t say I didn’t get slight butterflies from his bossiness.

She did too… but she didn’t want to. She was all…

Truth is, I’m a rarity around these parts, which isn’t necessarily a good thing. Most women are happy to ride bitch behind their old man, motorcycle club associated or not. It’s the way of the world. But as usual, I refuse to conform to society’s ideals and precast notions. I am my own woman. I chose my own path. And I decide what I will or won’t allow to control the path I’ve worked so hard to stay on. I can’t lie and say it was a walk in the park to grow up in this lifestyle. It wasn’t. It’s rough. It’s hard. It’s a dog-eat-dog world out there, and in here, it’s a hundred times worse.

So I’m leaving it at that. Engaging for sure, but a bit too “crazy-raunchy”, a bit silly and over-the-top

, and not enough gritty depth, for me. Still, that ending has me wondering… 😉 I may just pick up the next soon enough.

P.S. I am TOTALLY MAKING those chocolate chip cookies, though. Thanks for the recipe!! 😀 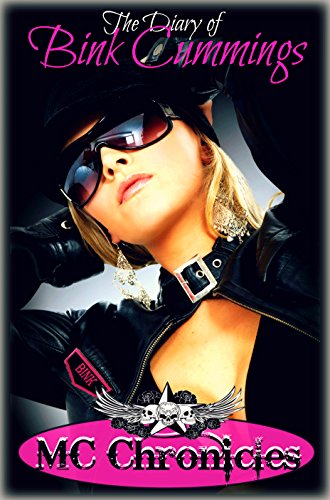 I’m on the 3rd book right now. It was just that different from other MC books & I’m not about to say I can’t get enough Big Dick, because I’m a Grandma & all! Good Review Maryse!

Hey, Maryse? Know what other book has huge love from fellow readers?

Lol. Sorry. Not sure why I keep doing that.

Nancy, the way the love is for this series, I have a feeling it gets better with each installment. 😀

I read this series on your recommendation and it was amazing