My Sister Is a Werewolf
Cute and fun (and really really HOT!!)! I always feel like I can relate to Kathy’s characters. Unlike many of the paranormal books I’ve been reading lately, her characters aren’t as “ancient” and still retain many of their very human qualities. They continue to concern themselves with mainstream human lifestyles, are emotional, and experience a range of insecurities, that of which us “mortals” can comprehend. And, what’s more, they fall in love with “mere mortals” too!

I guess, when all is said and done, when I read a book and “escape” my world, I don’t want to escape too far. I want to feel like it’s “normal” (or still somewhat realistic, as if even I could be a part of it). Our world…just “cooler”. Kathy Love, Lyndsay Sands, and even Kerrelyn Sparks deliver these kinds of stories. Characters with a modern feel. Paranormal people you’d expect to have as neighbors, or maybe even work with,  meet in a bar… 😉 *ahem* OK anyway…speaking of meeting in a bar, onto this story:

Elizabeth, the recently reunited sister of the Young brothers, is lonely (and antsy). After having lived a long life with her rough, rude and obnoxious “werewolf pack” (a biker gang that was the complete opposite of her genteel ways), she has escaped. Now living (in hiding) in the same town as her brother Christian, she is desperately trying to find a cure to reverse her “werewolf-ness”. Succeeding would mean she could finally be free of being the pack leaders mate. Cheating, abusive and psycho, her “mate” forced her into a situation she might not have accepted knowing otherwise.

One evening, “antsy-er” than usual, she goes to her brother’s bar, and finds herself uncontrollably attracted to a man (Jensen) at the next table. Her new world quickly turns upside down (but in a good way).

The man was looking at her. She’d felt his gaze before she’d actually seen it. Their gazes met, and even in the dim light, she could see his eyes were a mixture somewhere between brown and green.

Again her body told her this was what she needed. This was what she’d been wanting. He was what she wanted. She continued to stare, meeting his gaze, until he looked away. Still she watched him. Unable to do otherwise. The need was in control now.

This was too damned weird. Yet he couldn’t stop glancing at the stranger. She sat, perfectly still, her attention trained on him. She didn’t even seem to register the man beside her. Jensen shifted, his body reacting to that steady gaze as if it was a touch, stroking over him, teasing his burning skin.

I’d liken it to “love at first sight”. While she might not admit that, her extreme, undeniable, reaction to him leads her to act in ways that would normally embarrass her. Regardless, she is unable to deny her lust for him. The “werewolf” in her forces her to claim what is hers, by whatever means she can. The human in her cringes when she recalls her actions.

And what actions they are! Wooooohooo hot hot – scorching hot! She practically stalks him in a predatory,way, over and over again, and while all of his senses let him know something is off, he can’t deny this gorgeous creature that demands he ummm…”give it up”.  😯

His fingers itched to touch her, but instead he said, “This is crazy.”

She reached out and caressed him again, her fingers tracing the line of his jaw. Soothing him, encouraging him. He caught her hand and pulled her back against him, kissing her. She caught the back of his head, tasting him with greedy demand.

While they sexually explore their obvious attraction, they begin to develop a deeper connection as they get to know one another. But things are never easy in a paranormal/human relationship.

Elizabeth shook her head. “You don’t understand. I can’t be with Jensen.”

“I can’t be with Jensen because even if he would accept me, I’m mated.”

Not only does she have to contend with hiding her “nature” from him, she also continues to fear that her horrible “mate” will find her before she has found her cure.

And unbeknownst to her, Jensen also has a past of his own that he is still trying to get over – the loss of the love of his life, Katie. That, along with a few deep regrets and apprehensions, keeps the angst going strong in this tale.

There is one part of the book that I thought was going somewhere (it seemed like it was definitely set-up that way), but in the end, it didn’t happen. I’m not sure if the author abandoned that storyline, or if I simply missed a part, or if it will be explained in future books, but that would be my only complaint. I won’t say what it is, since I don’t want to spoil anything but it DOES have to do with Jensen.

Their emotional, physical and even life-threatening journey together will keep you entertained, and her protective brothers will have you laughing and feeling all warm and fuzzy (after they’re done bullying the new man in her life, that is). All in all it was a great, well-rounded, charming read! 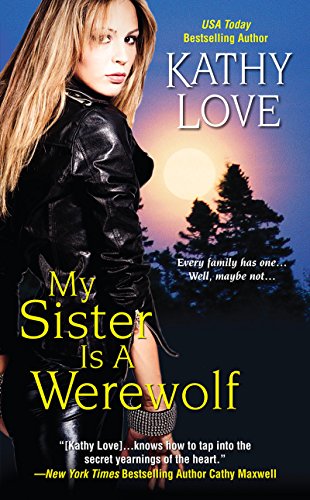