Book two changes in tone slightly, from the first book. While the first was more of a “guilty pleasure” involving two people indulging in each other (a romance novel with a paranormal twist), this one initiates us to a darker world, where humanity is constantly at risk. While the romance aspect of the story is forefront, we are taken on a dark journey through good and evil, and introduced to many key characters to come.

In the Dark-Hunter series, humans have a false illusion of safety, while evil rules in a parallel actuality right here on Earth. Night creatures called “Daimons” (soul sucking vampires) rule the darkness, and steal the souls of humans to extend their own cursed, short lives.

“As Daimons they cheat their sentence by taking human souls into their bodies. So long as they maintain the soul, they can live. But the problem is the human soul can’t live in an Apollite body and it starts to die almost as soon as they take it. As a result, the Daimons are forced to continue preying on humans every few weeks to sustain themselves.”

Humans contentedly exist in that false sense of security, since they are unknowingly protected by “Dark-Hunters”.

“The Dark-Hunters are all that stand between the human race and slavery or extinction. Without them, the Apollites and Daimons would own us all.”

They are immortals, similar in appearance to Daimons, souless (but not heartless), with the only goal of ridding the earth of Daimons. Certain humans who displayed fearlessness, strength and nobility in life, were offered their immortality by the Greek god Artemis at the time of their death, turning them into “Dark-Hunters”. Their souls are taken, and they are granted powers, and trained for their purpose.

Julian (the half-god from the first novel) explains how a Dark-Hunter comes to be;

“And they volunteer for this?”

“No, rather they’re drafted.”

Her frown deepened. “Drafted how?”

Julian took another drink of tea. His gaze fell to the floor and she saw a strange light in his eyes as if he were remembering something out of his past. Something painful.

“When someone suffers a horrible injustice,” he said, his tone low, ” their soul makes a scream so loud that it resonates through the halls of Olympus. When Artemis hears it, she goes to the one who cried out and offers them a bargain. For a single Act of Vengeance against those who wronged them, they will swear allegiance to her and fight in her army against the Daimon predators.”

Amanda breathed deeply as all the information swam in her head. “How do you know all this?”

Julian looked up and his gaze scorched her with its vivid intensity. “Because my soul made that sound the day my children died.”

While Dark-Hunters avoid mingling with the human world, and abstain from finding love at all cost (it is forbidden as it will alter their abilities and judgement), they are a close knit group that fight together for a worthy cause.

In this instance, a Daimon (Desiderious) with more powers than they have ever encountered, is killing their team one by one, but keeps eluding them.

We are introduced to the two main characters (Amanda Devereaux – Selena’s sister), and Dark-Hunter Kyrian (remember Julian’s best friend and faithful warrior from his Spartan days?). Amanda is part sorceress, but she hides that part of herself so that she can lead a “normal” life. She wants nothing to do with the powers, that are prevalent in her lineage. One quiet evening, Amanda’s identical twin sister Tabitha, (who relishes her own abilities), requests that she go feed her dog (as Tabitha is held up, while “hunting for vampires”). As she enters Tabitha’s house, she is mistaken for her vampire-hunting sister, knocked out and kidnapped.

She awakens to find herself in a cell, handcuffed to the gorgeously statuesque Kyrian. While he soon realizes what they are up against (the evil Desiderious, with a master plan), Kyrian is determined to keep her (and her family) safe from harm. Due to their circumstances, he is obliged to let Amanda in on his little “vampirish” secret.

Outside the door was a narrow hallway with large, dust covered windows that showed the dawning sun.

“Damn,” Hunter snarled under his breath as he took a step back into the room.

“What?” she asked, her heart skipping a beat in terror. “Is someone out there?”

“Then let’s go.” she started out the door.

Clenching his teeth, he looked down the hallway again and said something in a language she didn’t know.

“And the problem with that is…?”

He hesitated for a few heartbeats, then opened his mouth and ran his tongue over his long, pointed canine teeth.

Once they escape, he takes her into his home, to keep her safe, while he figures out how to finally rid the world of Desiderious.

As a result of their close proximity, they embark on a profound (yet forbidden) relationship. While the attraction between them is undeniable, they each face a few obstacles that keep them from letting go completely. Kyrian’s reluctance stems from his fear of ever falling in love again, due to his wife’s cruel betrayal that essentially, was the death of him.

What Kyrian didn’t tell her was that in order to be free, the Dark-Hunter must place his or her soul into the hands of someone who loved them. Having been burned so severely by his wife, he would never again trust anyone with his body or heart, never mind his immortal soul.

Amanda struggles with her own past objectives to lead a normal life (and questions how her vampire hunting sisters will ever accept Kyrian). Notwithstanding, Kyrian is controlled by Artemis and her strict rule that Dark-Hunters never become involved in a relationship. Along with all of the above, they both become alarmed when they realize that they face yet another hurdle (Amanda’s powers are stronger then she ever realized, draining Kyrian of his powers when they are intimate).

Kyrian looked up at her and the pain she saw in his greenish eyes tore through her. “I only wanted to make it better. I never meant to hurt you.”

He took her hand in his and held it gently. “I know.”

He pulled her into his arms and held her close, but she could steal feel the rigidness of his body.

“You made it better, Amanda,” he breathed in her ear. “Don’t take away what you gave me by feeling guilty.”

“Is there anything I can do?”

“Just let me hold you for a little while.”

His words tugged at her heart. She lay cradled in his arms and felt his warm breath fall on her throat.

Kyrian buried his face in her hair and breathed the sweet scent of her. He’d never felt as weak as he did just then and yet something about her presence gave him strength.

How can they surmount all of these issues (and is Desiderious more than just a Daimon)? There is SO much more to this story (details that I couldn’t even begin to try and re-explain as perfectly as the book does). It all just seems to “make sense”, and comes together wonderfully. This book will definitely entertain, but more importantly, it is obviously the start of a tale so intricately woven that you will remain captivated! 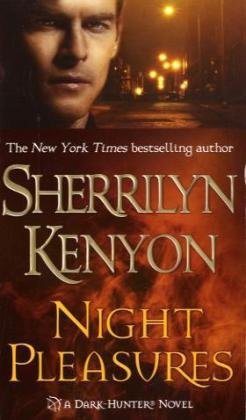 Kyrian, Kyrian, Kyrian, how can I forget Mr. yummy leather guy. I love this book because of the way the whole Dark Hunter life and rules are introduced, Including how to break out of it too. 🙂 An accountant who wants a normal life and on the other hand, a Prince of Macedonia who is the best warrior in his day. Two different people with two different takes in life. Both been GREATLY BETRAYED by the persons they loved.

I was touched the most by this scene:

Amanda took his face in her hands and made him look at her. Her hands shook as she wiped the blood away from his lips and nose.

“Don’t you dare give up… Fight for me, Kyrian. Please!”

This was genuine love. If I where in Amanda’s place I would have sold my soul just to save him. It was sooo perfectly laid out and you will come love the characters as you read along the series. They are one of the couples who are always there to help other Dark Hunters.