Outnumbered
<— Okay I’m a little early with this review ’cause it’s only going live in a week or so, but I was so excited by the premise, and the fact that it was a Shay Savage book (her stories are always SO unique), that I had to jump in now.

I’m usually always wanting to be strictly in the heroine’s head but I LOVE her moody, reclusive, total-loner heroes, and she’s one of my favorite authors when it comes to writing the male POV.

Yep. We’re strictly in HIS head for the entirety, and *ahem* considering the circumstances (tee hee!) I think it was for the best. 😉

It hooked me from the start. I LOVE books of this nature (living life contently despite meager necessities – or struggling, for that matter – and suddenly being holed up with a stranger in the middle of nowhere). I love the potential and the dynamics in that.

And it doesn’t surprise me that this author took this already stressful (and exciting) “trope” one step further. 😉 In fact… that’s what I was anticipating.
So what’s it about?

It’s now officially winter and “Bishop” is making his last trip into town (and what a TINY town it is). He’s not there to socialize (the very small population knows this about him and gives him wide berth) and his anxiousness to just get back to his tiny remote “off-the-grid” cabin in the woods is tangible.

I try to stay away from tourist areas even this late in the season, but sometimes it can’t be helped. Still, it makes my skin crawl to be around a lot of people.

Also, he’s annoyed ’cause he just saved a tiny kitten and has no clue what to do with it. *snort*

It’s set fly up into the air as it falls on its back and rolls a bit before righting itself and whining.

With a sigh, I reach down and pick the kitten up. It’s so small, I can barely feel its weight in my hand as I grumble to myself and go inside.

All he wants to do is to be left alone with nothing and nobody to care for but himself. He wants to bunker down for the entire winter. He has just enough food and supplies to not have to go our again, and to… hibernate.

He lives by candlelight, and kerosene lamps, has his fireplace for warmth and cooking, reads, eats what he’s hunted and fished for during the rest of the year, and sleeps under his “skins” and furs. And THAT’S the way he likes it.

I’m anxious to return to my own space. The cabin is a great place to be alone, which is how I have lived for the past three years. Three years since I moved out of Margot’s abode and into my silent, isolated cabin. It is best for everyone that I remain on my own.
Safer, too.

Having come from an abusive childhood and spending much of his life in prison, he’s finally free and he never wants to be found again.

But as he leaves to head back home, he finds an unconscious woman that has been abandoned on the side of the road, about to freeze in the oncoming storm. He reluctantly takes her to his cabin with him and tends to her. As expected, when she wakes up, he feels crowded, overwhelmed and already regrets having to deal with someone in such close proximity.

I should say something to make her feel more at ease, but I don’t know what to say. I spent my formative years locked up, and the social niceties of regular society are simply something I never learned.

He can’t take her back, because the snow storm has made travel impossible… and to his dread (the very reason he avoids talking to anyone), she’s nosing into his life, trying to make conversation, asking him personal questions. And he’s FREAKING out.

My stomach is so tight, I can’t sit up straight. I want silence. I want solitude. I don’t want any of the sh!t that has been thrust upon me, and it’s all her fault for being stupid enough to trust some redneck tourists. Standing quickly, I face my unwanted guest and point a finger at her.
“I saved your f**king life.” I’m practically snarling at her, but I can’t stop myself. “I got you inside, fed you, and gave you a f**king toothbrush.

What I haven’t done is bash your head in, though the thought keeps crossing my mind.”

And then… she proves to be a whole other version of “impossible”. 😛

This should bother me. It should worry me. I should most likely be afraid for my life…

I’ll stop here and let you read it, yourself.

It was good! The first half had me HOOKED. From the images in his head, to his though processes, to how they had to accommodate each other’s moods had me on edge and I loved every minute of it. Already problematic under normal circumstances, but there’s nothing normal about this. I was IN.

WAIT!!! *skip this next part if you want to go in blind… not that I spoil anything in particular, but I analyze my feelings over a few things and don’t want you going in with any preconceived notions*

A few of my hiccups with this story:

1.) how quickly Bishop’s own personality changed into a more easygoing, almost innocent nature. I get his backstory (and it’s relevant and comes full circle for him) however I was really hoping he’d stick with his moody-jerk self for a good while to keep up that tension. For the most part, a little “sweeter” than I what I was expecting.

2.) And while I love the premise and was fascinated by the heroine’s backstory (and current personal dilemma – I love the exploration of such… situations. ;)), by the second half, things (in conflict, and in resolution) were a little rushed and over-the-top.

3.) The writing style seemed to have changed, from the first half of the book (old-school Shay Savage at her best – think “Surviving Rain” & “Evan Arden”) to the second half (the whole “rushed” feeling that I got from it as a whole) and… plausibility.

That said, I still enjoyed it, and can always trust that this author will take an already unconventional trope and run with it, making it that much more thrilling.

P.S. Thank you to the author for sending me this review copy. This was the kind of story I was EXACTLY in the mood to read, and I just couldn’t hold off. 😉 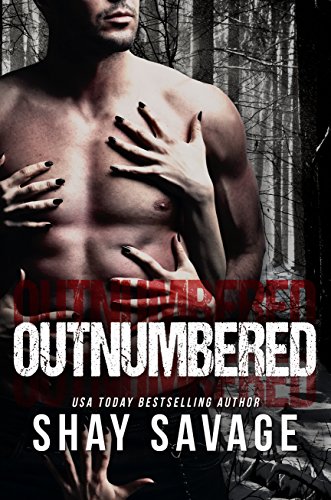 Oh! Looking forward to this one. Love Shay Savage and these “unique” storylines !!