Paradise Hops (overall – 4 stars)
I think I’m liking this book even more… after the fact. After I’ve had time to sit and think about it, knowing everything I now know. I can’t tell what happened to me while I was reading this (another mostly all nighter read for me – with a 4 hour night-nap in between) but at times, I couldn’t wrap my head around my feelings for it as I was reading it. I was fluctuating between a “good” read to a “very good read”.

The writing was good, I was enjoying the story, and let’s face it, this is really our kind of thing, especially considering it’s an “adult” 30-something version. Two gorgeous guys to choose from (brooding, arrogant “bad-boy” and Mr. Perfect good boy) and a woman with a traumatic emotional scar keeping her from really connecting.

And you know what. I think that’s my answer right there. I must have been “her” while reading this because but I was —–> “over there” for a good part of my reading, with this one. Somewhat, disconnected. I couldn’t tell if I was having trouble relating because it was wayyyyyy past my bedtime and I was simply too tired to bond quickly, or if it was something else. But I think… I think I just answered my own question. She couldn’t fully connect, therefore, neither could I.

Hrmm! That was fun! Amazing what a little sleep can help put into perspective. 😉

Okay so HOW could I possibly question my enthusiasm for a book with an adult-version-love triangle? Right??! I know! But I did. I struggled with portrayal of the guys at first. The gorgeous alpha-male bad-boy industry-famous brew master (Eli) employed by Lori’s company (Brockton Brewing), was supposed to be all brooding (and he was) and all super-moody (and he was)…

The man remained stock still, still holding her gaze as if challenging her. She stood up straighter. “I’m here for the next six months to learn this part of the business. You know, so I can be your boss someday.” He frowned at her. She frowned back.

Then he tilted his head back and laughed, stepped into her personal space and smacked her ass so hard she yelped. “I look forward to that day girl Brockton. Yes, I do.”

Haha!! He had me grinning there. I know.

I should have been fuming. *sigh* Where are my priorities? Stupid “being an independent woman with a penchant for alphas”. *hrmph!* That can get very confusing you know. 😉

And yet, I found his initial hot/cold reactions to Lori a little “drama-queen-ish”. Over the top. I enjoyed when he was pompous with her (he sure wasn’t lenient with the boss’s daughter), but I struggled with his mood swings. He was all… “Grrrrr stay away and go back to your suit…” to well… “Grrrrr stay away but first I will have you up against the wall…” and stuff. 😛 Tee hee!! I dunno. Just the rhythm of it I suppose was too fast for me to crush on him, all-out like she was.

And then there’s Garrett. I pretty much loved Garrett right off the bat, but I thought I was supposed to love Eli, so I was really confused. Garrett. Now HIM I could buy, for the most part. Gorgeous, GQ-type, and a master at what he does. Sweet as anything. Intelligent, generous, just absolutely perfect. And the kicker? I REALLY fell for him when he said this about “Eli”:

“Beside, you’ve been so busy in the brewery getting backrubs from that prima donna, you’ve lost touch with the real part of this business.”

LOL!!! YES!! That was exactly my first impression of Eli (well I said drama queen), so Garrett and I were totally on the same wave-length. Ahhhhhh that was a relief to know that my “over-the-top” impression of Eli was purposeful. (my note in the book was: “Haha! Garrett called Eli a prima donna and now I love him!)

Except the heroine often contemplated Garrett’s bossy control-issues, and yet I didn’t get that from him at all. I wasn’t sure if he was supposed to be the bad guy all of the sudden, but I wasn’t feeling that. Her thought process told me he did these annoying things, but I didn’t get to experience it, or react to it. If you want bossy and controlling lemme point you in Eli’s direction.

But that’s just the beginning of the book, and there is so much more to experience. After all, Lori is not always a picnic either, but with reason at first. She is terribly scarred from a past assault (and this comes out, in detail).

He’s just a man, Lori. Not a predator. Calm down.

And the new men in her world help bring her back to life.

So many times, however, emotional scars or not… my reaction to her was absolute exasperation. She made me angry. Unabashedly indulging in them both and yet keeping them at a distance. And I realized, maybe we are meant to be “Lori”. If that is so, than all of the mis-readings, and the misgivings, and the tentative connections with these guys, well… I think they’re because of her. And unfortunately, this was my earliest and pretty much, constant struggle. Connecting to characters, is important for me to really bond with a book and I had NO idea who to connect to. Who did I want to win?

I figured it out. Lots of hurt and confusion for all involved, but I was finally connecting minus a few moments that had me peeved at Lori and raising an eyebrow. I felt a little “catty” at times. I questioned the reality of a few things, but you know what? This is fiction, and it was well-rounded enough that I went with it. Who says some of the “situations” that arose from certain “circumstances” wouldn’t have happened in real life? I’ve heard crazier.

But reality does come to play. That’s where the book took an up-turn for me. Turned me from a slightly irritated 3.5 star to a 4 star read. And then big things happen. I wish I could give you a hint ’cause…  NO. I can’t. I won’t! Just know, as with many of our angst-y reads, this is another. Heartache ahead.

Knowing she had no one to blame but herself.

Warning: There may be tears. Did I cry? I think I was all cried-out from yesterday’s book, so no, but I could have. There was still something… yep still that “I dunno what” keeping me reading at a distance. And another moment where I was really irritatingly confused. I started skimming that part (the only part I skimmed in the entire book). I rushed through it to understand. And then I did understand, but I suspect my “skimming”  may have interrupted the climax of the story. So whatever you do, don’t skim!! Let’s see if you get the maximum reaction that you’re supposed to.

Had this book been longer, maybe allowed me to really feel and satisfy my romance need, I may have really loved it. Definitely worth a read though. It has plenty of what we like but just not enough of it (for me) to give it my ultimate *squee* But hey, I’m still thinking about it, so it did affect me. I just wished I could have really went nuts for it.

So overall 4 stars it is (with an occasional 3.5 star clouding my reading experience).

This book was sent to me by the publisher. 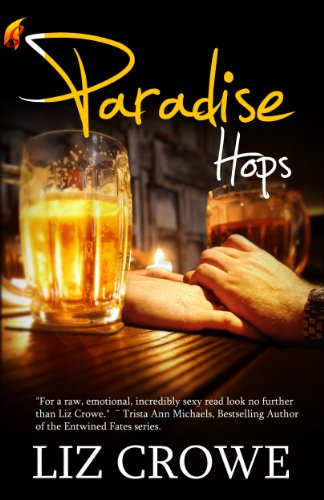 Oh, I’ve beem completely hooked on Liz Crowe’s “Realty” (yep, that’s realty, not reality)! Her plots are like a soap opera on crack, but I love her characters (and their equally ramped up sex drives ;)) so much, that I just go along for the warp speed ride. Now that you’ve read this new story and found it to be worthy of a late-nighter, I’m bumping it up on my TBR list! Thanks, Maryse 🙂

Let me know what you think! I have her Realty series on my TBR list and heard there is a 6th book on the way!

Whoops! Make that-Liz Crowe’s “Realty” SERIES…dang tiny phone keyboard Ground Floor is the first one and I liked the heroine as much or more than Sylvia Day’s Eva Tramell! Sexy, sexy Alpha and Beta guys galore 😉 Definitely kept me up for hours.

I’m going to get that reading order guide up, and get started!

Gah! FLOOR TIME (STEWART REALTY) series is book one. Yes, please post an accurate reading order as you always do 🙂

I sobbed reading this book! I can’t take anymore of these sad books!! They are killing me!