Pretty Stolen Dolls
<— WHAT A CRAZY BLURB. This is what a psych-trhiller teaser is made of, and OMG I moved it right up my TBR list to be next in line. I had to find out more!

Amy: “Daddy always told us to be careful.” ~ Pretty Stolen Dolls by Ker Dukey. Um, Maryse? Didn’t you click this one? Yeah, you gotta read it.

I can’t say it’s a 5 star (who knows, maybe that will change?) but I am flying through it right now and loving it!”

And I was right there with her for the most part.

An exciting and scary psych-thriller, but with the whole investigative/police type of discovery that goes along with it! I’m not usually one for “detective-type” stories, but the fact that this one fluctuated between the past (as a captive, tortured victim) and the present (said victim out for revenge), I got a kick out of discovering the same main character, having lived two completely different lives.

A whole story that starts off in the main character’s teens and brings us full circle into her adulthood. And that of one on a mission.In fact, the main detective on the case was the “original” victim that managed to escape a horrific nightmare (after years in captivity).

And now she has a very specific goal. Find him… GET HIM… and rescue her sister that is still stuck there. That is… IF she’s still alive.

Two sisters went to a flea market and the youngest one found a doll, at a doll stand that she wanted. With a bit of coaxing by the enigmatic salesman behind the table, the eldest sister agreed to buy the doll, but they had to go home to get the money. And of course, the salesman was all to happy to “drive them wherever they needed”.

Four years ago, I let my guard down for one man. I allowed the curious girl within me to forget the most important message our dad taught us: not all monsters hunt in the dark. Dropping my constant guard for the attention of soft, golden brown eyes and a crooked smile, the walls I held strong, weakened, stealing my equilibrium and sending my hormones into chaos. At fourteen years old, I was weak in the knees for a man much older than me.

Kidnap in full progress, and the girls find themselves captive to a pervert (<— OH YES I SAID IT!!!) /sicko that abuses and destroys women if they don’t prove themselves to be the “perfect doll” for him.

“What’s wrong with me?” My voice is a mere whisper.

“Nothing. You’re perfect. You’re both perfect. Exactly what I was looking for. Two precious little dolls.”

You see… he collects them. Both the inanimate, AND human versions.

I relive that day over and over, fantasizing a different outcome, but I always end up here.

Yet at one point, his favorite doll (the heroine of this story) finds a way to escape and takes it, with all intention of bringing back help for her equally captive sister.

I know him better than he knows himself. I know his patterns.

And one day, I’ll pounce. I’ll end this and save us— save her— like I was supposed to.

Except… things don’t quite go as planned, and nobody can find their prison. Or him.

I’ll leave my “rendition” at that, but I will say, for those that need trigger alerts, you are on full-warning blast for this one. He’s pure evil. Abusive, manipulative, and the detail in many of his sick-f*@k* acts is prevalent. Every. Single. Detail.

…he’d chanted while butchering her. I couldn’t block out her screams and gurgles as she drowned in her own life essence.

Four girls had come and left via the spirit world and my inner voice always asked why he kept us.

He kept us locked away.

Apart from each other and lonely for affection.

Starved of comfort and connections.

This book is not for the faint of heart, and will make you uncomfortable (in ALL respects). Not just from HIS evil acts, but from the feelings they elicit.

“I’m loving you,” he hisses, placing a hand over my mouth to silence me.

What a stupid word coming out of his hateful mouth.

And I will leave it there.

The rest is up to you.

Did I like it? YES. I read it and was nervous and uncomfortable  and confused. I couldn’t always tell if we were coming upon something substantial and groundbreaking, or if we were dealing with a mental break. But either/or, this one will keep you reading, and I just found out book #2 is just around the corner.

Amy: Pretty Stolen Dolls is the first of two books and ends on a CH and I am P!SSED!!!!

LOL Amy!!! That ALMOST had me wondering if I should hold off, but when you are pissed, often it means the killer cliffhanger COULD be a good one (albeit, destructively annoying) so you had me even more intrigued. 😉

And all I have to say to that is IT BETTER BE! Yes. Killer cliffhanger for sure, but I don’t regret it. There was certainly enough story (and an intriguing plot twist) in part one… to lead us into part two (Pretty Lost Dolls <— DO NOT READ THIS BLURB if you haven’t read book #1 yet).

3.75 stars <— I REALLY enjoyed it, but the whole “detective” aspect was a little less “my thing”. *sigh* I know. The rest? Awesome and disturbing. 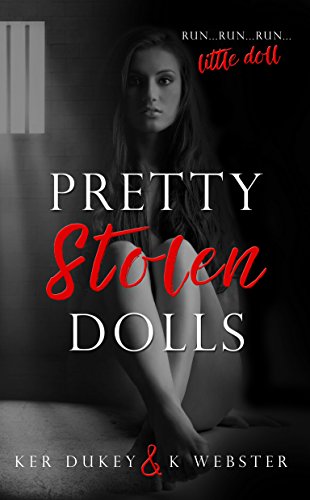 Yeah, the whole detective aspect was definitely out of the norm for me so it was a bit of an adjustment. And yes, the details of what he did were just so… *shudder* I was cringing.

I think my biggest problem is how there was nothing upfront about it being the first of two books. Actually, I was flat-out p!ssed that I didn’t know until I reached the end of the book. I was really looking forward to things being wrapped up, and then all this crazy stuff happened and it just…stopped. I honestly don’t care to follow this story through another whole book, BUT it would be really good for those who enjoy this sort of story being stretched out.

And I agree it’s always fun to wrap it up in one satisfying swoop, but this ending has definitely opened up a whole new ballgame. 😉

Agreed. I’ll bet it is going to get pretty crazy in the second book with all that happened in the last part. Definitely some WTH moments there. 😉

What does this make…book number 3 over the past month where I have no intention of continuing the series? See…it’s the whole “it’s not you (the book), it’s me.” Right? Right. That’s what I’ll keep telling myself. *snort*

Right there with you Amy. 😛