Providence
A paranormal romance book that gave me quite a few palpitations! It certainly didn’t lack in the love triangle angst that I love so much. I had moments of absolute desperation for the heroine, felt her heartache and her confusion. I couldn’t help but fluctuate between what “team” I was on, in this one, because both “heroes” were so worthy of my love.. I mean Nina’s love 😉 .

Nina is from a wealthy family. Her father is the CEO of his own huge corporation, having much power and respect. Despite his powerful position in life, he adores and dotes on his daughter Nina, and she adores him back. A car crash however, ends his life, and her world turns upside down. Not only is she having to deal with her incredible grief over his loss and her emotionally distant mother, she soon realizes that she didn’t really know her father at all.

As his business dealings come to light, she realizes he had a shady side to him, one that ultimately could have (and still might) put her life in extreme danger.

With a quick jerk, he yanked me toward him. I gasped as he whispered in my ear with his guttural, growling voice. “I’m not playing games with you, little girl. Your father has documents and photos that I want. The last time I saw them, they were in a file in his office marked Port of Providence. I want that entire file, do you understand me? Unless you want mommy to have to deal with me later, I suggest you do as I ask.”

But her college friends are there for her, and with the start of two new friendships (a hunky student named Ryan, and a mysterious gorgeous stranger, Jared, that she keeps running into) she slowly emerges out of her numbing grief. And she begins *crushing* on Jared (the mysterious stranger). HARD! He always manages to “show up” when she’s in a bind, but never sticks around long enough for her to figure him out. He won’t even give her his phone number. But there’s no denying the attraction between the two.

Seeing him again was exactly what I wanted, but my sense of self-preservation cried foul. The entire situation was one big red flag, but did I believe Jared was dangerous.

Something about Jared’s eyes assured me that in the short time I’d know him, he was safe. Every piece of me that had been guided by my father to be reasonable and wary was screaming run, but I knew i would intentionally try to cross paths with him at the earliest moment fate allowed. The moment of sadness in his eyes before he left me played out over and over in my head. I had to see him again.

Ryan, her study group partner, is finding himself head over heels for her. She’s smitten with him, too, but her *feelings* for Jared leave her preoccupied. Ryan is her best friend, nothing more, leaving Ryan intensely irritated. He’s NOT impressed with Jared. At all.

“Do you think he came there to check up on you?

I contemplated that for a moment. “I don’t know, maybe. I’ve been running into him a lot lately.”

“I like to think of it as fate stepping in,” I mused.

Ryan’s face twisted to petulance. “Sounds like stalking to me.”

“You should talk, trying to fight over a girl you barely know.”

“He had his hands on you,” he grumbled.

“Thank you,” I smiled, nudging him.

As Jared finally starts letting her in, the things she discovers about him, and about herself, change her life forever. Her “normal” will never be what it once was.

I stared at him, bewildered. I wasn’t sure how to feel; even with the suspicions I’d already had, I couldn’t have prepared myself for what he was telling me.

Fun book overall, even though in the end, I still had a few of unanswered questions. Specifically, in this “world” are we all “talehs”? Or is it specific to a bloodline? How did her father know about “them” (enough to become involved with them directly)? Luckily, a few of my questions were answered in book #2.

Of course, as in most paranormal adventures, there’s lots of danger (bad guys, demons, even some scary stuff from some of the “good guys”). But no matter what danger is lurking in the background, the underlying emotional tug of war between two very worthy men remains in the forefront (and was my favorite part of the whole book).

“He said he wouldn’t make you choose. But if you don’t have a choice, I’m the one that loses. So I’m going to make you choose, Nina. Choose me. Please… choose me.” He shook his head. “I can’t live without you.”

Lots of emotional issues that tug at your heart. Secrets that, once pieced together, reveal a HUGE life changing situation and important choices to be made (some of those choices are even self-sacrificing). To name a few of those gasp-worthy moments, there was a little “Ryan-revelation” (one he doesn’t even realize, himself)  that made me go ruh roh!!!!!  No. Way! Fate plays a HUGE role in this series, in fact, it’s based on it. But what if these very characters are misunderstanding “fate” and possibly harming themselves in the process?

You’ll find yourself teary-eyed over and over again. Those were my favorite parts. They held me captive, made me gasp, made me sigh, made me worry. I couldn’t even choose (well, eventually I did, but it took me awhile getting *there*). This book was full of sweet, romantic and downright heartbreaking moments between two star-crossed lovers that were never meant to be… or were they?

He had promised to fight fate for me, but I could see he was terrified that the fight wasn’t his at all – it was mine. 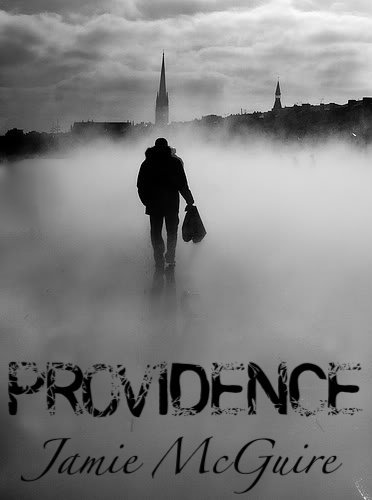 Ohhhhhh man am I in trouble…………I think I am gonna have to go to rehab after this week……I am in love with Kellan. I don’t think I will find anything to excite me…….who am I kidding its written by Traviss “maker” hehehehehe I am in!!!!!!!!!!!!!!!

@ Patricia , haha That’s the reason i purchase these books because them were made by ‘ Travis Maker’
🙂

Can’t wait to get into these !

Hey! I know this review was post a long time ago, but I was wondering where you got your copy of Providence? (the one in the picture) I’ve been looking all over for it!