Rhythm, Chord & Malykhin
Gotta LOVE her crazy, crazy book titles and character names, but most of all, GOTTA LOVE her SLOW burn romances. And this one? OH GOD YES! Right up my alley for sure! Rock star bus tour + hot lead singer + this author’s brand of teasing us until we’re about to explode? YES PLEASE!!!!

And I gotta say… I pretty much loved it. A quick, easy read that was not necessarily unputdownable, but SO EASILY pick-back-uppable. Like *if* I put it down, for whatever reason, I was SO happy to get right back into it. One of those.

And I mean, for many, you may not even need to put it down ’cause it’s just shy of 200 pages. If you have an afternoon all to yourself for sweet, relatable-fantasy fun, this one’s for you!

Lori: I’ll read anything she writes!!

Jennifer: After reading Kulti by this author I will read ANYTHING she writes!!!

Rebecka:  And … I just finished it. So good. So good. So good. I wouldn’t 5-star it, like I did Kulti, but it’s a solid 4.5 I can’t believe she released it so stealthily. I would have pre-ordered that for sure. After this, she’s definitely on my “I’m-buying-anything-you-write” list. Which is pretty short so that’s saying something.

Gabby is asked by her twin brother Eli to travel with his band (and two others) on their tour bus and help them with the sales of concert memorabilia. Just having graduated college but not having anything to do as of yet, she accepts, and the hijinks begin! But it’s the wonderful kind. The feeling of family and friends, but of the “bratty” kind. And well… maybe one that could be so much more than a friend. His name is Sacha. *sigh* He’s just… awesome. AWESOME!!! And therein lies the romance angst!

Who wouldn’t like Sacha? He was handsome, funny, kind and incredibly talented. Wouldn’t there be something wrong with me if I didn’t like him?

I could deal with a little crush. No big deal. I couldn’t browse the Internet without finding a picture of some attractive guy I would never meet.

And that was the story I was going to go with.

I mean, I could admire him from afar without it meaning anything, right?

What I loved about it? Pretty much everything (minus 2 hiccups). I loved that even though it was just shy of 200 pages, I didn’t feel like I was missing any detail to the story. For the most part, it didn’t feel rushed, or “glossed over”. And what I loved the most? We were strictly living this love-story, from HER POV, which means ALL of that insecurity, angst, and second-guessing was in full force, not only for the heroine, but for me, too. ‘Cause I NEVER knew exactly what he was thinking, planning, talking to and wanting. I had a good idea, sure… but since I was only “her” I got to feel all of those hopeful (or worried) butterflies.

Good grief. Why did my chest hurt? Was this what a heart attack felt like?

What else did I love? ALL of the secondary characters. They all had a personality, and they were all very much involved in the progression of the story. Especially her twin brother, Eli (a member of one of the bands she’s touring with to “help him”) and his best friend (also her best friend), Mason. Both of ’em just pure brats, but hilarious, loving and protective (in their own ways). And other band members that contributed plenty to conversations, goofy antics, and even tour-bus tension.

Like… here’s a funny scene where her behemoth, bad-ass of a twin brother is braiding her hair, for her, on the bus. But of course, he doesn’t want the guys seeing him do this (he loves braiding hair!!) so they close themselves up in the room, but her brother’s best friend is wondering what they’re up to…

“Hey! Can I come in?” Mason’s voice bellowed from the other side.

“No!” we both yelled simultaneously.

He didn’t immediately respond, like he couldn’t fathom why he couldn’t. “Why?” he finally asked, sounding confused and disturbed.

“Eli’s showing me how he puts a tampon in,” I snorted, earning another sharp tug of my hair from my brother.

*snort* I can just see Mason… standing there… perplexed and disturbed. LOL!!!! But believe me, he’s just as obnoxious as the rest of ’em.

What else did I love? The PERSONAL detail. The stuff that made these characters not only provide us a main “love story” for us to read, but details that had them living and breathing and actually interacting realistically. And I’m telling you now… I BELIEVE these people truly exist. I mean from the incessant teasing, to the ponytail pulling, to the awkward guys attempting to comfort the moody girl on the bus, to the emergency time-of-the-month-starting right there in the middle of a three all male band tour bus trip… with her being the only female on board. Oh. You get the picture. 😉

What else did I love? There was nothing to skim for me. Superfluous sex-scenes? Nope! I mean… don’t get me wrong… I like one or two well placed smoking-hot love scenes that forward the story as needed. But often times I find myself skimming them to get back to the “real part” of the book. Yet this one allowed me to “live” them as two platonic friends that were attracted to each other but not bold enough to “make something” of it… at least not until much later. It was… exciting anticipating when it finally would… or *might* happen.

This story was comprised of moments after moments that lead us further and further into our big-time crush (but also, connecting with her whole entourage). Funny chats, crazy bets, concert antics, late night cuddles and long discussions… but no… sex. I mean it comes… eventually. But I LOVED that I got to fall for him, and enjoy their friendship, without all of the “immediate” steam. I love a slow burn. That’s how many a real love story happens. Friends of friends. Crushes that last weeks. Months. Last minute “hanging out” and getting to know each other. Sweet attachment and fun new “alone-time” routines… and that delicious coveting that never really becomes anything, but is so obviously EVERYTHING.

So yeah… this book did it for me.

And I have only two real hangups. A few times, her second-guessing was a bit much, considering what I FELT was so obvious, but then again… I’d remind myself. Hey. YOU try falling in love with, and hanging out with, and platonically cuddling every night with a coveted rock star and be all confident no matter how obvious he is. I highly doubt any of us would be.

There was an intimacy to the moment that spoke volumes. It made me want to cry.

Especially considering he’s got a girlfriend. Or is she an ex? Or an on-hold?

She had that kind of classic beauty that would give a photographer a boner. And perfect, clear, pale skin.

*snort* I LOVE IT!!! Yep, from Gabby’s POV, this was definitely giving me cramps! LOL!

And I found as detailed and fulfilling as the story was as a whole, it ended two quickly. Kind of abruptly in fact and while I was good with the ending, it could have been so much more. perhaps we’ll get more as we visit the other band member’s own stories in the future? I can’t imagine Mason and Eli not getting their own books. THEY MUST!! *hint hint* 😛

So all that to say, I really liked it! Fun and funny, so sweet and slightly angsty. Maybe not enough to have been screaming this from the rooftops as a must-read-now-if you-want-your-world-turned-upside-down type of book…but just enough of everything for me to enjoy every page! It’s a great afternoon on the beach read! Or a flight read. Nothing too emotional to have you regretting reading in public, but plenty of sweet romance angst to keep you entertained and still give you some feels. 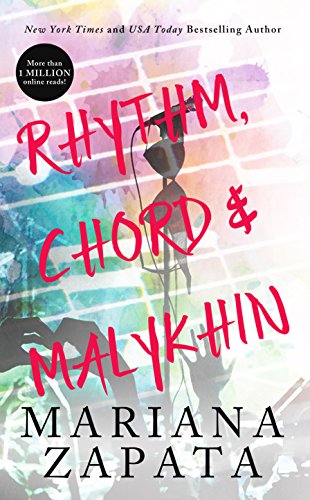 I agree 100%! Good but a little too much second guessing for a 24 year old. I kinda rolled my eyes a couple of times. Not much can live up to Kulti though!!!!

I love how he was mentioned a few times. LOL!!!

I know! I noticed that too!