Sexiest Vampire Alive (Love at Stake)
Cute, cute, cute!!! Loved it, but in a sweet, going-back-to-my-old-school-reading sort of way. Nice and familiar and cuddly. All of the love at first site attraction, the corny come-ons, the intense seduction, and the “I can’t love him cause he’s a vampire” stuff. But sometimes that kind of fluffy reading really refreshes a person. You know, the whole “too much of one thing” and all that. Makes one jaded. I found myself eye rolling more than sighing after too many paranormal romance “candies” in a row. But in spurts, it was just what I needed. After all of my recent (and delicious) dark reads, I needed something that didn’t freak me out too bad. Might even make my next dark drama even more agonizing. Like cleansing the palette 😉

My friend Sherry and I were discussing the paranormal romances we were currently reading:

Maryse: I’m reading The Sexiest Vampire Alive. It’s cute!! A bit much, in terms of the love at first sight… but cute for sure!

Sherry: Is that Gregori’s story??

Maryse: Why yes it is!! He is a CUTIE!! It’s so cliché, but after all of the dramatic, darker books I’ve been reading as of late, it is sort of a relief. Kind of like watching a cartoon, but in a good way 😉

Sherry: Kerrelyn’s books are very *Mellow* in comparison to a lot of books we read….I’ll associate Gregori with Sponge Bob now……. LOL

Maryse: Hahaha!!! He called her “Toots” once, and called her sister that too. And sweetcakes. *smirk* tee hee!!!

I’m sorry Gregori… I didn’t mean to give anyone the Sponge Bob image. You’re not that kind of cartoon, and anyway, you are WAY hotter than him. Ya gotta admit, though, you were a little over the top sometimes. No doubt you did have me swooning, but after all of my recent books, you had a sort of…. cartoon-y appeal. But you know, like in the fairytale-happily-ever-after sort of way. I was never nervous with you, and I was glad for it.

So what’s it about? Corny Corky the vindictive vampire reporter released the vampire-turning-to-ashes video on the Internet, and now the vampires need some diplomatic assistance.

Safe and harmless. Somehow those words felt like the worst of insults. Gregori yanked at his tie to loosen it. “You’re choosing me ’cause you think I’m an Undead Pillsbury Doughboy?” He shook his head. “No. Hell, no.”

Roman gave him an irritated look. “You’re a marketing expert, Gregori. You understand the importance of how we are perceived. If we’re seen as a bunch of dangerous, bloodthirsty monsters, it could mean the end of us. You can honestly present the image we want because it is what you are: a modern-day, well-educated, hardworking, harmless Vamp.”

So they meet with the President of the United States for help. The government will officially release a statement indicating that the video is a hoax, and well, I guess the vampires will assist them later, when the time comes. Mutually beneficial.

But while Gregori is there meeting with the President, one of the President’s daughters catches his eye, and they can’t keep away from each other. There’s electricity in the air.

He was still looking at her! She pressed a hand against her chest. Good Lord, her heart was going crazy.

And then he smiled. A slow, devastating one that curled to the left in a lopsided fashion before transforming into a full-fledged smile. With dimples.

Of course, this must all be in hiding, but they have plenty of opportunities to “hang out” with each other, so things get pretty intense quickly. But, even though her father accepts the idea of vampires, will he ever accept one for his daughter? And will Gregori trust her enough to let her in on more vampire secrets that could potentially save her very sick mother?

So all of that drama, and oh!! Of course there is some danger thrown in, on a dangerous expedition that I think the president’s daughter was sort of being a brat about. But oh well. We did need drama, and this helped 😉

Enjoy it! It’s an easy, light read but has enough of everything to just feel right. The human (albeit First Family) interactions, the vampire family interactions, Gregori’s hilarious human meddling mother…

“Fair warning,” he whispered. “She’ll bring up children in less than five seconds.” He straightened. “So how did you know I was here tonight, Mother?”

She unrolled her napkin. “Roman, Angus, and Emma just teleported to the school, and they brought Shanna and her sister and mother with them. The mother wanted to meet her grandchildren.” She smiled at Abigail. “Did you know vampires are able to father children?”

… along with some steamy, sad and mad stuff, and all of the stuff that goes with it. It’s all good! 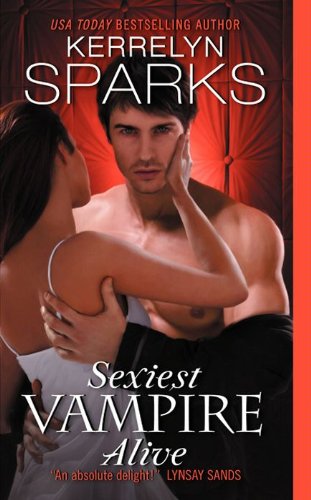 I may have overlooked but don’t see that you have reviewed Nalini Singh’s Guild hunter series or her Psy changeling series. If you haven’t read them both series are great I have enjoyed all of the books in each series. The Psy changeling series is one of my favorite series. In fact I think the last book was the best so just keeps getting better.

Maryse! Ok ok ok. I have been reading Wide Awake which is a twilight fan fic, I don’t know if you have read it yet, but so far, I’m loving it. It’s defiantly not Fifty, but it’s pretty awesome. Check it out if you haven’t. && it’s freeeeee!

I just soooooo love Kerrelyn Sparks…She arouses more than one appetite I have….And, by God! She has made my life brighter with her funny characters… Mostly love Tony and Ian’s story… Can’t wait for Phineas’ story… Wondering who he’ll be paired up with…Hunch is it’s Brinlley, Phill’s twin sister. Now that oughta bring more spice in the story… Angels, Demons, Vampires, Shifters? What’s next to shock us? <3

Lauren, Nalini has been recommended quite a few times lately, so I’m defiinitely going to!! Thank you so much for bringing it up!! I’ll start with the Psy changeling series since that is the one I hear about most.

Christina!! THANK you for that find!! I looked it up, got it ready in my iPad, and can’t believe the amazing comments I’m seeing about it. I can’t wait to start!!

Agreed! There has only been one or two of Kerrelyn’s books that I was “meh” about, but each one has a hero that has made me second guess my choice of favorite hero in her series.

Still, though, I’m sticking with Roman, Jean Luc, and …. there are at least two more. I just can’t pick them right now. LOL!

maryse, I’m almost finished with it. Edward has a potty mouth and I love it! This love story is amazing.

Christina! Does he EVER!!! WOW. Doesn’t make me think of “Edward” at all (which personally, I’m *good* with). Nobody does Twilight like Stephenie, but I’m really really enjoying this story. Wow, when she left for the trial… his reaction (especially when he was alone, what he was “preparing” for… broke my heart).

I don’t even see “Edward” in my head when i read this. This guy is a character all on his own.

Maryse
yeah I totally agree with you…Have you seen in Kerrelyn’s site the videos on the series’ dream cast? Lordy, does it pack steam!!! Anyway, I love Tony and Ian’s story because it was reeeeeeeaaaally funny… When I think back I may have swallowed just a tad bit too much air because of laughing… Certainly love Tony’s “I am a Studmuffin! And for entertainment call ‘whatshisname'” vandal… But when it comes to choosing the hero’s…nah…can’t choose… Hey, I’ve also read one of the Psy changeling series of Nalini and yeah… I may have had at least 70% of TMI syndrome… Hotness, though personally deep down in my heart nobody can really beat giving me TMI syndrome than Gena Showalter… Have you all read her Dark Taste of Rapture? Maaaaaan, it is hard to believe that Hector’s a virgin… :p

So Psy changeling is steamy, I take it? hehe

I’m good with that!