Skin
Another super-steamy zombie apocalypse read by one of my new favorite “queens of steam”, Kylie Scott!! Whooooooo!! Not in the least bit subtle when it comes to that department, but yet sooooo perfectly detailed. Quite affecting. *blush* Tee hee!! When things ignite and they’re all over each other (even with their clothes still ON!!!), you’ll find yourself tugging at your shirt, wondering if it just got hot in here.

Love these books! But it’s not just gratuitous sex. Intense, detailed romance is what keeps me hooked. And what I love about these is that her stories explore all aspects of connection amidst disconnection. A deep-seated desire in a world gone wrong to connect to someone. To trust. To have a partner. To not be lonely, anymore. In a world where zombies are ravaging humanity (well pretty much, most of it is already gone), and humans are sparse, these relationships are few and far between.

There is no society as we know it, every man (and woman) for themselves, and the groups that have been formed are either as deadly as the zombies, or unwelcoming to newcomers.

And that’s why I enjoyed this book. Because I could feel the need to comfort and be comforted. Despite the crazy and obnoxious circumstances in which the hero goes about fulfilling his need, I understood him on an innate level. Imagine spending your days alone, day in and day out, while memories of your loved ones… memories of your past, haunt you? While the living dead taunt you. And to know that there is a woman… not too far away, that just might ease your pain.

Nick is lonely. So very lonely. And he’s decided he needs a girlfriend. To love, to care for, to talk to… and especially to have sex with. So he does everything he can to make a tiny paradise amongst the death and carnage that surrounds them. His military expertise, combat and stealth aid him as he carefully plans, finds and secures the most perfect “home” (an eco-spa resort!!), fixes it so that “they” may live as normally as possible, always protected from the deadly moaners. He stocks up on food, toiletries, clothing of all kinds. Everything “they” could need to live comfortably, despite the circumstances. Even water to wash with! He’s got it all figured out. And now all he needs to do is convince the other half of his “they” to join him, willingly. Oh. Did I mention he cooks?

No, he wasn’t one of the bad guys.

Eventually she’d understand. He’d spoil her. Comfort her. Make life as easy for her as he could. Give her whatever the hell she wanted. If she’d just give him a chance.

And so he makes a trade for her (she’s holed up in a library with fellow colleagues and has no real clue as to what’s going on outside). Infuriated that she was “procured” and scared out of her mind, Roslyn resists Nick EVERY STEP of the way.

She definitely didn’t trust him. Sure as sh&t didn’t believe him when he said he wouldn’t hurt her. It made her smart. He would never hurt her, but anyone who trusted strangers these days was an idiot destined for a short life. He would provide for her. He’d prove himself to her.

Sure he may be handsome in an unconventional, rugged, super-masculine way. Sure, he may have one gorgeous body that she can’t stop staring at. Sure, he may be sweet to her, and has certainly thought of everything… but… you know. “Buying” her is not winning him any points.

Oh, and after her incredible resistance and a good wallop to his head with a wine bottle, leashing her to the bed isn’t doing him any favors, either.

“Good morning,” he said with a grin.

What the f&$k did he have to be so happy about? Oh right. He wasn’t chained to a bed by a whistling lunatic.

Tee hee!!!! Oh stop it! I know chaining an unwilling woman to the bed should not be giggled about… but this is just for fun. Any anyway, she got him GOOD with that bottle (I actually felt really bad for him!).

She’d done him good. It sliced trhough one dark eyebrow and up the side of his forehead, trailing off into his hairline.

That’s what you got for trying to buy girls with canned goods. Devil.

For me, it’s a pure guilty pleasure to read about the regression of social mannerisms, and politically correct ways in the face of devastation while some of the characters are STILL be able to grow and connect. To find themselves again, and in the process, to fall in love. To hope. To re-build. Their world, and themselves.

And no worries. She’s a smart cookie. She knows how to hold the cards. Er… wait. Let me re-think that “smart” part. There was that one thing she did, where… yeah. *grimace* I’ll let you read it and go, “OH NOOOOO!!!! NO NO NO NO!!!!” for yourself.

On feeling alone, I’d have to say that I loved #1 more (check out my “Flesh” review here), but that may simply be due to my shock that I could connect on such a romantic/emotional level with characters in a book about zombies. That surprise alone had me 100%.

For this one, I thrilled for the whole first half, the resistance, the drama, the emotional upheaval and the incredible mistakes each one made (to their own safety and to each other). I loved the tentative connection that was so precariously balanced. The “way” they got together, and their need for true friendship. I was grinning (and growling) at his caveman ways (ohhhh he could do and say the most appalling things!!! Nick was infuriating), and yet his true gentle nature, had me (and her) falling for him despite it all.

The second half was definite action/adventure, and I “lost” a bit of my connection to her at some point. Things, the romance (and/or maybe just she) changed a bit too fast for me, but then again, considering the circumstances… *shrug* And anyway, I’ll admit, I liked the cozy atmosphere and personal one-on-one interaction of the first half a bit more. But hey, I’m kind of homebody so you know… let’s cuddle by the fireplace and listen to the moaners, I mean, delightful chirping of crickets, and cuddle. That’s what I wanted to do.

Alas… things happen that set this one in perpetual motion. 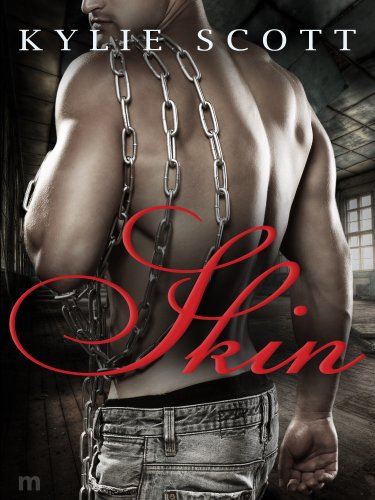 I had this one on pre order after reading Flesh. I loooooved Flesh. This one was good too but not on the same level for me. Although still a real good read. And our characters showing up fro the first book was GREAT! Cause I loved Finn. 😉 And of course I like the way she ends her books. he he he And I feel like she has room for book 3! But I agree with Maryse, 3.75 or 4 stars for me too. 🙂

Yep!! We have another book coming. BONE! Love it. And I love that Nick was one of the “bad guys” from #1. When I realized that, I was thrilled, ’cause I totally remembered him.

I agree with you Nicole. I thought SKIN was good too, but I was in a bit of a love/hate relationship w/ Nick and Ros. I was very satisfied w/ the ending though, I feel like if Kylie Scott did end it right here, I would be okay with it. I liked seeing Ally, Dan, and Finn again too.
Although I found Ros absolutely annoying sometimes, I have to give it to her that she’s not a weakling waiting to be saved. I liked the fact that she was willing to take risks and hold her own weight. I gave this book 3 stars.

I absolutely love Zombies in all aspects. When I read this reveiw I thought I had died and gone to heaven. A world where zombies roam the earth, a book that has great sex scenes, plus a great story. This sounds like everything I love all rolled into one. Maryse you are sooo good for me and sooo bad. LOL. So good because threw you I find book I would have other wise never found. And bad for me because I log in and buy and then download them. This week I have not only Valentines Day but my wedding Anni too. So as a gift to myself I will be buying both of these books. But….Shhhh don’t tell my hubby. He hates all the books that I have been buying. Thanks for the heads up on these ones.

ha ha ha, Melissa, don’t tell your hubby…..too funny! I’m always telling mine that he “MUST support my reading”!. It always seems he wants attention when I’m in the middle of a REALLY good book. LOL
Sweet D, Yes yes yes! Ros annoyed the hell out of me up until the last part of the book. Oh well, loved Nick. What a MAN! 😉

OMG!! I love and dread reading your reviews. lol. When I read your review of this book I was beside myself. Zombie Apocolypse!! Girl chained to a bed!! Oh my. I absolutely love zombies. They are my fav. I never miss my favorite show The walking Dead. This book just made me drool. So much so that I had to look them up, read the blurb for both books and ultimately buy both books. lol. I am just going to finish up Mogul by Ginger Voight ( which I absolutely love. The 3 books have just been driving me crazy but I love them!) And then I am going to start these. You are my cryptonite. And you are always right on with your reviews. Thanks for showing me more great books.