Sparrow
This one had all the makings of my kind of guilty-pleasure thrill ride! With the whole kidnapping premise, and the forced marriage and living with (and hating) the captor, the unapologetic bad guy. The resistance, the fight and the fear. Finding out WHY he not only forced her from her life, but why she HAD to be his wife, too. Sounded like fun, to me!!

Cheryl: I don’t usually go for the mobster story, but couldn’t resist with all the positive recommendations.

Anne: Just finished Sparrow and loved it!! The H was such a jerk but I fell so hard for him. The h was wonderful too! 5 stars from me.

Cheryl: Finished Sparrow. I really liked everything about it, the author’s writing, the story, the suspense. As always when it’s a great read I want there to be more to the ending.

Cristina:  finished Sparrow this morning and it was FANTASTIC! I just LOVE an alpha jerk and sassy heroine!! It’s a great 5 star formula for me!! It’s re-ignited by love for mafia books…

Is he a stalker, in psycho “love”? Is he trying to exact revenge against someone that means something to her? And you know how bad-guy mafia-types are. There just could be a mistress, in the mix. <—

OH NO HE DIDN’T!! Oh yes… he totally did. There was a ton of history (and motive) here to discover,  and this one had all of the potential of a fume-fest.

Especially since the “hero” or should I say anti-hero, has been described to us as the ultimate jerk. Oooooh I was SO excited about getting to hate him real good. It’s so much fun to fume and fury against the main love interest… er… I mean, in this case, hate-interest, only to break through his armor and see all the gooey-sweet stuff in his middle. And then we struggle between our initial hate of an unredeemable buttonhole (<—

Or maybe… he remains unredeemable, and then we have an even bigger fight on our hands, as our hearts and minds war against each other. Done right, that’s just threatening me with a good time, and I’m in! LOL!!!!

Jillian: Sparrow was an absolute love for me, too. I went in posted in our book group that I had no idea the H was goina be THAT big of a jerk. Like total a$$hat at first. But that’s the kinda guy I love, le sigh. It was so good!

Maryse: Okay Sparrow has to be next for me!!!

Troy is the BIG man in Boston. Born into an Irish mafia family (his father being one of the “heads”) he was raised in that world, and groomed to be one of the baddest. Nobody messes with him, and he’s made a fortune… via underground means. The police and pretty much everyone is under his thumb, and while he’s suspected of a few grisly murders, he’s too good to be caught. But he’s not Mafia. He’s above it all. Badder. More controlling.

I feared and loathed Troy Brennan. He was practically untouchable in Boston. Loved among the cops and respected by the local gangs, he was able to get away with murder. Literally.

And he has two purposes in life.

1.) To avenge the death of his father

2.) To marry the “Plain Jane” girl that he promised his father he’d marry. And only he knows why (even though he has no interest in her whatsoever, and in fact, resents her for “forcing” this on him).

Even back then, I knew that Sparrow Raynes was not for me. Her quiet behavior screamed something I didn’t want to hear. I knew her mother deserted her and her father was an alcoholic, that life had fed her sh!t from all directions. But she never got under my skin. Not many people did, and only one woman ever had.

So, truly, the feelings I had for Sparrow Raynes were the same as I had for every women other than the b!tch who broke my heart— a big, fat, hollow nothing.

And she barely knows who he is, and certainly doesn’t want him, either.

…in order to keep my promise to my dad, I had another name to handle that wasn’t even on my list.

I, of all people, needed to be her savior.

Other people— normal people, I guess— would have never agreed to sacrifice this part of their lives for their father. But other people didn’t live under Cillian Brennan’s shadow, didn’t feel the urge to constantly step up their game to be equal to their late legendary sire. No, I’d follow his wishes. And I’d even make it work.

But “Sparrow” find herself in his clutches, and while sure, he’s handsome, and his 6’4″ hulk-of-a-body, extreme wealth, and alpha attitude attracts most women (all women?), Sparrow can’t stand him. Even more now that he’s holding her hostage, and forcing her to marry him.

“Dear future wife…” He smirked in a way that made me want to beg for mercy. “If you think you’re going to give me trouble, think again. I invented trouble. I stir it, I mix it, I f**king fix it. Don’t try my patience, because you’ll discover I have absolutely none.”

She realizes now that she will never get to fall in love, if she’s tied to him, and she also knows there’s NO WAY to untie herself.

A part of me wanted to yell at everyone sitting in front of us and smiling like idiots, to lash out angrily. I was twenty-two. He was thirty-two. We hadn’t even gone out on one date.

Never been out together.

Barely spoken to each another.

This was a lie. How could they let this happen?

I felt for her, ’cause she saw all of her sweet and simple dreams for her future… falling apart. And he wasn’t even NICE!!!

That said, I was anticipating him to be a bigger jerk than he was, and for longer than his obnoxiousness lasted. Oh no, don’t get me wrong, if this were real life, he was plenty hateful. SO disrespectful, and shamelessly so.

“…I’m not a nice guy.” He emphasized every word. “So if you’re looking for favors, you better start reciprocating. Start acting like a goddamned wife and not like a prisoner.”

But for a mob-type guy (“the Fixer”) that was the head of the city, with everyone under his thumb, I could already see through his mean-guy mask, and wasn’t surprised (and maybe even a tad disappointed) when he was quick to crack (and so was she). A little quick to get a secret thrill out of his feisty heroine that he supposedly dreaded having to marry.

…she was beginning to crack. Rays of light streamed through her walls of defense. Even though I liked their warmth, I was careful not to give her too much hope. We weren’t a real couple, and this wasn’t a love story.

Hmmmm… I beg to differ, Troy. 😉 Your light was shining through your cracks, too.

But I certainly craved a bit more believable turmoil and enraging interactions before they started getting along, so once that “get along” moment finally kicked in, we’d feel it even more. It would be… special. Rare and relieving.

And perhaps it could have been that, had we only experienced him through her POV only.

I found his POV let us into his “heart” and personal unrest and worries a little too quickly. Not as much thought-provoking mystery to this bad guy because we were privy to too much of him. A bad guy… but it was quickly obvious that he had a heart (albeit broken and jaded). Which is fine. Sweet. Appropriate since this is romance, even though he says it’s not. 😉 And even though it’s unconventional and dark.

Or maybe I’ve just read so many “bad-guy” books that I’m becoming immune to ’em, unless they’re truly unredeemable? *gasp*!!!! (And you know we’ve read a few of those). That said, this one isn’t near as nightmarish as I was expecting him to be.

The details were fed to us, slowly… with a few sly reveals (although I kind of saw ’em coming), but in the grand scheme of the biggest showdown, the grandest reveal of all? I wasn’t nearly as surprised, as I hoped I’d be. I dunno. It made sense, in it’s “grandiose-bad-guy drama” way, but the depth of the secrets, the betrayals, and the biggest issue of ’em all was so carefully planned out, so driven and focused, that the reasoning behind it all kind of just… didn’t seem to warrant so much chaos. Still, there’s trouble brewing, and even possibly a love triangle (or two) so it will keep you guessing, if you just go with it.

A fun read if you’re into falling for a broken bad guy, and maybe (despite not wanting to)… being the only one to heal him. 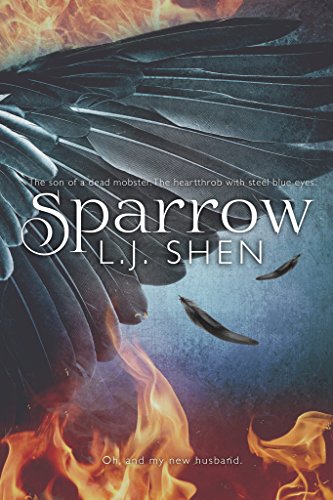 I read it all day yesterday and finished it last night. I was engaged throughout and enjoyed it, but I also agree with all of your points. The romance was slightly rushed, and Troy was a little bit softer than I would have liked, however, it was still an easy, likeable read.

Agreed, jenny! It was a good one, but I’m glad I wasn’t the only one wanting more. *hug*

Enjoyable read that kept my attention. Agree wanted more and maybe to be more in the dark regarding Troy’s thoughts/feelings. Maybe just the epilogue in his POV.

I don’t like love triangles in my romance novels. I’m fine if there is a third wheel that increases the angst of the story, but I get frustrated when a lot of time is dedicated to the couple that is not the main couple. In this case, is it safe to read « sparrow » of does it have a prominent love triangle?