You are here: Home / My Book Reviews / Book Review – Swear on This Life by Renee Carlino

Swear on This Life: A Novel
Holy moly what a clever premise!!! It was like reading a book within a book, and I was hooked from the getgo, and could barely put it down!

Lisa: We could read Renee Carlino’s new one Swear on This Life (which I cannot wait to read!!).

Maryse: Swear On This Life is fantastic so far. I’m halfway through… REALLY addicting and deep but nothing too angsty or traumatizing as of yet. Just VERY good.

Cheryl: Awww Maryse I’m so jealous you get to read Swear on This Life. Renee Carlino is one of my automatic one-click authors!

The perfect way to relay a past story (allowing the reader to truly get to know the characters) within the present, understanding why their lives are the way they are. The feel of what makes them who the are now, but even better, HER discovering a book written by a new best selling author, and realizing… it’s all about her!

I plopped down on my bed and cracked open the book to the first page. From the moment I read the second line in the first paragraph, my heart rate tripled. Instantly, I was sweating. By the end of the first page I was almost hysterical.

*oomph*!!!! A sweet story of two best friends since childhood that become so much more than that in their teens. Neighbors, brought up in broken homes, abused and/or neglected, poor and mostly… forgotten. But they have each other, and even though they have “nothing”, they are happy. They are complete. They are together.

…we had a nice life for awhile. My father called what we had at the end of that road a slice of heaven. And it was… for a long time. But if there’s a real heaven here on earth, then there has to be a hell too. Max and I learned that the hard way.

Until the day that circumstances change them forever.

But in the process… he sure did write their story.

His picture was pretty much the same on every listed hit. He had grown even better looking in the twelve years since I’d seen him. More distinguished, more chiseled. But still, there was something boyish and arrogant in his smirk. That f**ker.

Actually he wrote HER story (at least for the most part, even writing it from HER POV). And it’s a huge best seller that everyone is talking about, and when she finally sits down to read it, she’s blown away, and taken back to the past that she’s so desperate to forget. Reliving the heartache that she was convinced she’s no longer suffering.

These were the details of my own life. Emerson was none other than me. And Jax? He was most definitely Jason Colbertson, the boy next door who had once been my everything… my first. The same person I hadn’t talked to or seen in over a decade.

A really good, sweet, and often, harrowing story, and I’d almost say that the “book” inside the book was better than the “present” book itself.

I had told him everything. And he used it as a landscape that was strangely true to everything I remembered. The only difference was that Emerson was introspective at a young age, and I wasn’t so much.

I didn’t want to go back to the present as much as I wanted to stay with these two destitute kids just trying to stay alive and keep themselves under the radar, while clinging to each other in the process.

The “present part” of the story, while also interesting, had a more wayward feel to it. Quirky with occasionally insubstantial dialogue, that in reality, would have had much more substance to it, between actual friends, especially considering what some of them KNEW. It weaved the reader in and out of current events with present-day job and boyfriend issues, etc…

You didn’t move here for me. I’m just the girl you’re passing time with. We both know it. Why else would you have a hard time saying I love you? Why else can’t I see our future?

But it was THE BOOK (the one SHE was reading) that held most of the magic. I was absolutely captivated for the first half. DELIGHTED with it.

That said, the story waned for me somewhere in the second half, changing in tone and intensity. Even the book within the book experienced a quality shift, rushing to its end after having provided such detail and exquisite storytelling. And the actual book (the present) was drawn out, and to me, improbable, especially considering the circumstances.

NOTE: For those that want to go in blindly, skip the next portion of the review. I don’t spoil anything, but I do analyze some things…

A few important characters developed strange personality shifts. Her friend, the author for example, had an about-face from the loving, demonstrative teen in the book. As an adult, his demeanor and personality differed greatly, and somewhat disappointingly.

Certain situations and reveals were thrown in to help tie up loose ends that I didn’t even realize were loose in the first place, seemingly (unnecessarily) integrated into the story to round things out or move things along. Yet some things were left unexplored. So much left to chance, but even when chance “did its thing”, certain characters played with fire anyway. And I know why. All for that clever *oomph* that definitely had that WOW effect, when the time came. But the story progression in the second half just didn’t have that believable buildup, to me.

It was good. Just… a little strained at times.

That said, I started it yesterday and read my heart out all day today, so it was almost unputdownable. It had a bit of that Taylor Jenkins Reid feel (or should I just say… this is pure Renee Carlino, and fans will love it – as I did). A memorable weekend read for sure. I won’t forget this one!

4 stars! <— GAH!!! It’s GOOD you guys. And it was almost a 5 star for me for the majority of it. I was swearing up and down that this was going to be my favorite Renee Carlino book, as I was reading it. And then I was a bit… discombobulated with the last third, I guess. But it was good, also! It’s just… the first half BLEW ME AWAY. So… you know. When I didn’t feel that huge intensity, when to me, it didn’t build and build and build until I exploded with absolute delight or angst, or ugly-crying, or anything as captivating as the first part, well… I downgraded my stars a bit. The writing and the storytelling in the first half was incredible, but by the third of the book… more or less, rushed. That said, it’s still a great story!

P.S. Thank you to the publisher for sending me this review copy! 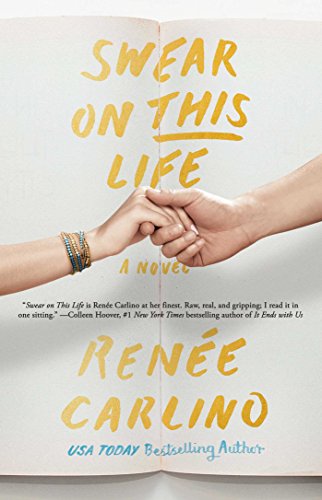 Cannot wait. I’ve skipped this review (Im sure its amazing Maryse) so I can go in fresh.
PS Love the cover…classy…no naked torsos or bulges here!!

I pre-ordered this book and am looking forward to it. You can always bet that Rene Carlino will not be predictable. You never know quite what you’re going to get but its always good. 🙂

I can’t wait to read this one. I also didn’t read your entire review-just how many stars you gave it and why. I’ll read the entire review when I finish it tomorrow. 🙂

I can’t either Cheryl!! I’m blazing through Nowhere But Here to get me in the RC mindset. So far I’m actually liking it more than Sweet Thing. I wonder if that will change!

I rarely go in completely blind, I should try it more often. For fun.
But what if she mentions something that is a complete turn off for you?

I’m going in blind on this one. If it’s a writer I’m obsessed with it can be a book about watching paint dry and I won’t care. I don’t know yet what turns me off, so I suppose that helps!

Bev I prefer to go in blind….but theres always a risk.
(Then you end up grumpy and out of sorts like I did post IEWU. Its unsettling when I have a completely different view of a book to everyone else. But hey…were all different.)