Taken by Midnight: A Midnight Breed Novel
Yup! I still love this series, and this book was great and exciting from the start. While the series is not my absolute favorite, I can certainly say that the books of “The Midnight Breed” series always capture my attention, I can barely put them down, and the series continues to get better as the story progresses. These “half-vampire” warriors are so easy to crush on. Their camaraderie feels almost as “real” as that of the Brothers in the Black Dagger Brotherhood.

Now, I can only say almost, because, in my opinion, nobody can touch the Black Dagger Brotherhood, in terms of intensity. The intricate, yet very private details into their lives that J.R. Ward reveals, seduces us. It feels like we know them. Like we’re a part of them. Or they’re a part of us.  But I digress. This is not a J.R. Ward review, but one of an awesome Lara Adrian book that I can’t wait to gush about. But…you know…what I was trying to say was, while you await the next BDB book, if you haven’t tried this series yet, it will hold you over nicely 😉

So in the last book, Jenna (Alex’s human best friend), was left in a very confusing way. Alone, and contemplating suicide, someone (something) enters her house. The Ancient Breed creature that the Order was hunting, escaped and chose her home to hide in and “feeds” on Jenna. Intrigued by her intense despair (from the recent loss of her husband and child), and her despondency to him and his potential to kill her, he attempts to communicate with her. After a few futile attempts he ultimately giving her a choice of life or death.

The decision is yours, human. Tell me what it will be: life, or death?

She turned her head away and closed her eyes, refusing to look at the creature. Refusing to be a part of the private unspoken game he seemed to be playing with her. A predator toying with his prey, watching it squirm while he decided to spare it or not.

How it shall end depends on you. You will decide.

“Go to hell,” she slurred, her voice thick and rusty.

Iron-strong fingers clamped onto her chin and wrenched her around to face him once more. The creature cocked his head, those catlike amber eyes emotionless as he drew in a rasping breath, then spoke through his bloodstained lips and fangs.

“Choose the course. There isn’t much time now.”

And when she finally chooses life, he leaves her with something that would change her forever.

In this book, the warriors of the Order (and Alex- the heroine from the previous book) rescue a catatonic Jenna, and bring her back to the Order’s Compound in Boston. Intending to study her, and the effects of what the original Breed creature did to her, they discover an implant in her spine that is weaving it’s way into her nervous system. Brock, a member in the Order stands by Jenna day and night and comforts her.

Like all of the Breed, Brock was gifted with an ability unique to himself. His talent for absorbing human pain and suffering had helped keep Jenna comfortable since her ordeal in Alaska, but his skills were just a Band-Aid at best.

Since he has an ability to ease pain and calm a patient, his original intent is to help her ease out of her “trance”, but secretly, he is drawn to her.

… an unbidden heat went through him like a flaming arrow.

Desire was bad enough, but it was the odd sense of protectiveness serving as a chaser that really threw him off kilter. That feeling had begun in Alaska, when he and the other warriors first found her. It hadn’t faded in the days she’d been at the compound. If anything, the feeling had only gotten stronger…

When Jenna finally awakens, she is livid.  Feeling like she has lost complete control of her life, she is also now being forced to live amongst these warrior vampires.

Gideon cleared his throat, breaking the silence as he glanced away from the infirmary door’s small window. “That went well. Considering.”

Brock grunted. “Considering she just came out of a five-day Rip van Winkle to learn that her brother is dead, she’s been leeched by the grandaddy of all bloodsuckers, brought here against her will – and oh, by the way, we’ve found something embedded in your spinal cord that probably didn’t originate on this planet, so congratulations, on top of all that, there’s a good chance you’re part Borg now.” He exhaled a dry curse. “Jesus this is messed up.”

The Order will not release her back into human society until they figure out what the Creature has done to her. And boy has it done a number on her…

She frowned back at him. “Like a bus ran me over. A bus that apparently dragged me from Alaska all the way to Boston.”

“It was the only way,” Lucan interjected, command palpable in his level, ask-no-permission tone. He was the leader here, no question about that. “You hold too much information, and you needed specialized care and observation.”

She didn’t like the sound of that at all. “What I need is to be back home. Whatever that monster did to me, I survived it. I won’t be needing any kind of care or observation because I’m fine.”

“No,” Lucan countered grimly. “You are not fine. far from it, in fact.”

So this is where I’m stopping. You’ll get a nice play by play of Jenna’s “evolution”, a continuation of the main villain’s plot, and of course an enthralling love story that will sweep you off your feet (but at some point, it’ll make you go… ruh roh…).

So click here and tell me…did you read it? Who’s story are you looking foward to? I’m excited for “Harvard’s” story. His arrogance is kinda hot, and you know…considering the whole “Elise” fiasco, I can’t wait to see who gets him. 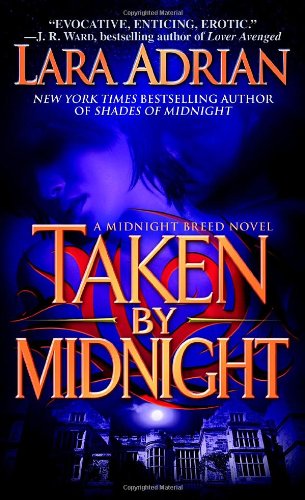 Hay Maryse….its been awhile since Ive had a chance to actually catch up with your reviews lately,,,October and so far the Beginning of November have not been the best months for me,,,,but just to let you know what ive been reading,,,
Well I read Karrilyn Sparks “The Vampire and the virgin” and Loved it,,,,I was soooo taken by Robby….and he was just the perfect gentleman,,,of coarse like all women,,,Olivia did know how to push his buttons..lol anyway,,I also managed to get thru First Drop of Crimson and Enternal Kiss of Darkness and I also enjoyed those greatly,,but even after I read the first one I knew I should have stopped and read the series with Kat and Bones,,but it wasnt hard to catch on,,,(My dad has been in and out of the hospital in albuquerque NM, so Ive been back and forth up there,not alot to do in a hospital when all ur doing is waiting,,so i managed to squeez in a few books they had a huge huge borders store,awwww my little piece of sanity) anyway,,,I also managed to squeeze in Crave,,,hmmmmmm yummmmmm and hmmmmmmmmmm coarse didnt really expect anthing else from J.R Ward..lol soooo Im headed back up to Albuquerque again in the Morning for yet another long 2 to 3 days,,and with me I have Midnight Awakening,,,(I actually skimmed over the first 2 cause it had been awhile since I was in boston..lol) and The Mammoth Book of Vampire Romance and also the 7th Book by Kresley Cole Kiss of a Demon King…anyway,,,I look foward to catching up after I get back…and as always thinks for sharing…
Jennifer

Thanks for the update 🙂 *hug* – I hope things get better for you soon.

I’m glad to see you’re enjoying some of my favorite books. Hey! Since you liked The Vampire & The Virgin so much, next, get her lastest “Eat, Prey, Love” – SO good!! Remember Carlos Pantera who scared Olivia when he was panther-stalking her (trying to help Robby)? This one’s HIS book and I loved it. I’m sure you will too.

I totally had to skim over some of the older Midnight Breed books, too, when reading Shades and Taken by Midnight. It’s been a year, I think, since I had last read something out of that series… with all the different things going on in that series, I needed the “refresher”. 🙂

Can’t wait to hear what you thought of “Midnight Awakening”

I’m with you on this one, it was not as captivating as many of the earlier books, but I still love this series. It felt to me as if the book was rushed, with not enough time to really develop the characters & make us care for them.

I just happened to stumble upon your review here while looking for the next book i’m waiting very impatiently for. I LOVE the midnight breed series. And like you I can’t wait to see what happens with Chase because he’s about to snap. Unfortunately the books are a little predictible, someone falls in love unexpectedly and they live happily ever after, but the underlying story regarding dragos and how they all live together and interact is great. I”m hooked and never want them to end!

I’m also a huge fan of the Larissa Ione demonica series, that is what got me out of the ‘romance’ section and into the paranormal romance. 🙂

I’ve been considering the J R Ward black dagger brotherhood and from your little blurb in this review I think I should definately check it out for sure now. I put the first book on my Christmas list, so guess I’ll wait till then to see if i get it. 🙂

Oh Heather! You are going to LOVE Black Dagger Brotherhood. LOVE them…I am SO jealous of everyone that get’s to read these for the first time. That series is my #1…and there is one vamp in it that is my number 1 of all the vamps I’ve read (even from other series). Well…maybe there is *one* other that I crush on almost as much – both start with the letter “Z”…hehe

You know, I would presonally recommend you put the first 3 on your list to get you started. You”ll devour them in no time, and I’m sure you’ll want to continue from there.

If you have time to let me know how you liked them, I’d love to hear it!

i am looking forward to hunter’s story. i should be amazing!!!!!!!!