X
You are here: Home / My Book Reviews / Book Review – The Cityscape Series by Jessica Hawkins

My first ever series, Cityscape Affair, got a makeover—inside & out! I’m so excited to present the 2020 box set edition (with a *brand new bonus epilogue*)

And… I’m going to warn y’all right now, this story is not for everybody. I know there is a large group in our readership that specifically avoid this kind of relationship turmoil, emotional indecision, and betrayal. And for good reason.

Maryse: I just read an entire trilogy this weekend! I haven’t power-indulged like that in awhile. It was good, too! It had a sorta… “Bared to You” meets “Arsen” feel to it. Just so you get an idea. I’m reviewing it as we speak. It was The “Cityscape” series.

Komal: LOVED this series! Best one for me thus far this year

Sandy: I really liked it too.

Maryse’s Book Blog: It got so intense!!! My favorite book is #2… I couldn’t put it down.

Lisa: So glad to see this!! I LOVE this series and book #2 was my fav of the series also.

Kayla: AWESOME SERIES!!! I LOVE THIS SERIES BY Jessica Hawkins I have read it several times!!!

Jamie: This has been by far the series that I’ve been comparing all other reads to…. I have MAD love for Jessica Hawkins and her Cityscape Series, it’s great to see so many others who enjoy it as well.

Karen: Oh ya that was an awesome trilogy !!!!

Nadia: As open as I am to many books the cheating spouse thing just doesn’t do it for me.

Yep… I completely understand your apprehension. I (despite often being riveted in the actual read due to it’s intensity and many of the all-consuming scenes) found myself struggling to get through it. Or… maybe saying “get through it” isn’t quite right. More like… I chastised myself repeatedly for reading it so ardently. It’s absolutely (and often) distressing, even in it’s fervency. And I’ll tell you right now. I wondered how I could review this positively, considering the distressing subject matter. I wondered how I could tell you that I enjoyed such a read. After all, in another similar-style read (Arsen), I LOVED it, but I didn’t worry about telling you I loved it (considering the “circumstances”), because, if you ask me, I was on the right team. 😉

In this one… well. There are no real “teams” per se (no real “bad guys” here). Just an undeniable connection, taking place amidst unfortunate circumstances. Isn’t that how “it” seems to so often be described?

Olivia is “happily” married to Bill, although, once we (the readers) are integrated into her life a little deeper, we see the “happy” is mostly on the surface. All is well… enough. Olivia is married to a successful lawyer, and she herself is an editor for a popular Chicago magazine. They appear to be well suited to each other. They get along. Have great friends. Are fairly social. A good match. At least, on the “outside”.

However, things that she considers “normal” and has gotten used to over the three years of her marriage, is actually (unbeknownst to her) what is wearing away at her. While her husband is considerate, semi-sweet and attentive, we realize that when it comes to intimacy… well. It’s fairly nonexistent. But mostly, she believes these issues to be her own. And maybe they are.

“Does that mean you think I’m cold?”

“Oh.” It wasn’t an entirely unfair assessment, but it was nonetheless painful to hear out loud. I didn’t mean to be cold.

After all, it takes two to tango, and while her husband may not seem to want to dig in deep… well… with anything when it comes to her (and them), I can’t help but wonder if her own walls were keeping him out from the start.

Bill had found comfort in the fact that it wasn’t just him.

Yep you guessed it. She has a few childhood traumas that keep many (even him… er… all of them) at arms length.

But one evening, at a social event that they are attending, she accidentally locks eyes with a handsome stranger. Her world shifts in that very moment.

They can’t tear away from each other, until “reality” forces them back into their own lives. But reality, life and professional circumstances eventually forces each of them back into each other’s lives. Regularly.

“Olivia,” he said softly. “I’m desperate to know you.”

And this is where it gets “hairy” from here on out.

That familiar current layered between us in an instant. There was much unspoken, but I felt bound to him in an inexplicable, supernatural way.

Resistance, insistence, and forbiddance are the name of the game the rest of the way. But it’s not just… a “fling”. Because the elusive, wealthy, debonaire playboy “David Dylan” opens up her world, her emotions, her wants… her needs… to a whole new level. And it’s causing all of them a world of hurt.

I’m going to end the “what’s it about” here, since each part of the story explores each part of this… “connection”. The slow burning buildup, the tumultuous relationship(s), and the fallout. Or is it the “build up”?

So if you’re game for the story, no matter where it takes you, no matter your own personal (noble and social) expectations, then… this might be for you. It’s hard, it hurts, and it’s crazy. I especially freaked out during book #2 (and you know me… if it makes me feel, I’m in!)

Let’s call us… “fictional reality readers” (whether sweet reality, or uncomfortable… maybe even downright reprehensible reality). After all, we’ve thrilled in some shocking dark reads, haven’t we? But no… this isn’t a “dark read”. But what it is, is every committed couple’s nightmare. But it could also be a soul-deep salve… depending on how you look at it. Depending on who’s reading this. I won’t say another word.

That said, the writing is fantastic, the emotional detail, involved, and the connections are so well explored, that we get to LIVE this story (the good, the bad and the ugly). Thoroughly. Intensely. Honestly.

P.S. Thank you to the author for sending me these review copies!

➔➔➔  Looking for my must-read recommendations? Browse my 5 star and 4.5 star and 4 star reviews or my favorite book lists here 😀 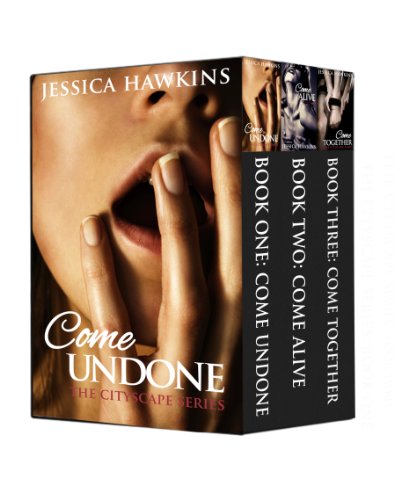 Wonderful series. I bulldozed through them and went back and read the hot scenes.
I loved what you said Maryse and there really being no bad guy in this series. Just an unexpected or planned love connection too strong to be denied.

I “like” to read books like this intermittently as I too am a feelings junkie. Even when the feelings are discomfort or other feelings that are challenging to experience (shout out to Megan Hart). One book I read recently (and gave 5 stars to) was Winter Blues by Jade Goodmore. It sounds like there are some similarities in terms of no good guys or bad guys. Just people struggling in different ways to sort through disconnections, connections, and re-connections. You get to understand things from different perspectives, which for me, just made everything feel more real. Things were also addressed and worked through in this book in a way that they sometimes aren’t in other books that deal with similar subject matter.

Just 1-clicked the bundle….looking forward to reading these books!

Marysse, you and your posse will be the death of my wallet. I read your reviews and ladies’ comments and bam, 1 click. Love it, keep ’em coming. My TBR list is huge.

Welcome to the posse Belle!!

Welcome to the posse to all of my new girls, and Happy New Years EVE!!! 😀

I’m just finishing up today’s “new releases” post. There are a few on there that already me giggling and blushing. 😉

Hi Maryse, Thanks for this review. And my question is…. What are You reading right now ??? happy new yearrrr
..i wish You all the best ^^

Maryse, glad you finally read and reviewed the Cityscape Series. David is a favorite of mine. Have to say this series is one of my favorites for the year.
Happy New Year and thanks for all you do!

Also, I think this is much deeper than the Temptation Series. The H in Temptation was of course a billionaire and had a private jet etc. The H in Cityscape series was wealthy but didn’t flaunt it so much.

You had me at Arsen.. I was hesitant when I first found this series, but I think that it’ll be the next series of books in my list of reading now that you mentionned that it held similarities to Arsen!!

DOES ANYONE know any more books about having affair (ie with husbands best friend( etc???

I would appreciate any guidance:-)

DOES ANYONE know any more books about having an affair (ie with husbands best friend( etc?

I would appreciate any guidance:-)