X
You are here: Home / My Book Reviews / Book Review – The Date by Louise Jensen

The Date: An unputdownable psychological thriller with a breathtaking twist
I couldn’t help but one-click this one when I saw the premise. A “blind/internet” date gone wrong, and it’s a psych-thriller, too??!!! MINE!!! All sorts of scenarios were running through my head. Would he be a stalker? Would he have a stalker ex? Would SHE become stalker-ish? Would he be some sort of underground serial killer, and yet the perfect boyfriend? WHERE could this go.

And this part of the blurb SOLD me on it.

“…She is ready, she is nervous, she is excited. She is about to take a step into her new future. By Sunday morning, Ali’s life is unrecognisable. She wakes, and she knows that something is wrong. She is home, she is alone, she is hurt and she has no memory of what happened to her.

Worse still, when she looks in the mirror, Ali doesn’t recognise the face staring back at her…” <— GASP!!!!

Maryse: Oooooh Amy you got me right!! The Date sounds crazy-creepy!!!

Kat: I’ve been on a psych kick lately. 1 clicked

Robin: I am halfway through this right now. Thumbs up so far!

Talon: I have this on my TBR, can’t wait to get to it!

Alas, the anticipation was better than the execution, for me. *sigh* I wanted a creepy obsessed/in-love stalker a la “You”!!!!! But instead, we got everything AFTER the fact (and yes… someone was definitely stalking her… but a little differently).
Sure, it did keep me guessing close to the very end, but the main “twist-reveal” was somewhat lack-luster for me. But it still took me for a ride.

I think it’s due to the main character’s disorder (she can’t recognize faces. Like… ever). Not even her own. And this put EVERY SINGLE THING into question.

Ali, struggling with being separated from her husband (whom she loves VERY much) decides to (at the goading of her two best friends) put up a profile on a dating site. Eeeeeeep! Already super-scary with that fact alone. And then… she clicks with someone, and accepts a blind-date with him after days (weeks?) of chatting.

And then… she wakes up at home, sick, confused and beaten.

The question circles my mind but, even as I ask myself, I think the worst. Have I been raped? By the man I met online? But I really don’t feel as though I’ve had sex, consensual or otherwise, and I’d know, wouldn’t I?

The question slams into me.

She has no recollection of the previous night, doesn’t remember “her date”, has no clue how she got home, but wakes up to blood all over her, her car damaged, and creepy notes while someone (her date?) messes with her.

Worst part? She doesn’t even recognize herself in the mirror. Or anyone else. Not even her own brother.

But it’s not his face.

No one else calls me this but him, yet I am not reassured.

Apparently the huge knot on her head was from a severe blow, and she’s developed Prosopagnosia.

‘Pros-o-pag-nosia.’ He breaks it up. ‘It comes from the Greek prospon meaning face and agnoisa for not knowing.

The word ‘blindness’ terrifies me…

It’s the craziest thing to try and put yourself in HER place… trying to understand how you can possibly remember people and what they look like, events, the sound of their voice, and their facial features (in memories!!), but when they are right in front of her, the same exact person from her memories, she can’t decipher their face.

It’s a man. I tell myself there’s nothing to be frightened of, it’s only James, but still I keep my eyes fixed firmly on the floor, unable to look him in the eye, wanting to picture his face the way I used to and not see the image my brain will tell me is in front of me.

She does NOT recognize… ANYONE.

There will be no re-watching my favourite films. No watching new ones. The actors’ faces will become unrecognisable to me the second they leave the screen, morphing into someone else as they return. I feel I haven’t just lost them, the characters in the programmes I love, I’ve lost a piece of myself too…

So as  a reader, you couldn’t ever really be sure of WHO she thought she was seeing or talking to, and therefore, it was difficult to pick up on subtle nuances to try and connect the dots, since you were never really sure of who the other characters were, as the story was building.

That’s how it feels now. I’m stuck in a House of Mirrors but, no matter how many sideward glances I throw, I’m never reassured.

And on top of that, it’s not just a mystery about her (and how she got that way, and who did this to her), but someone seems to be framing her (and terrifying her daily with ominous messages and “gifts”).

You look around as though someone might be watching, and I am, Ali. I am. I wouldn’t miss your terrified expression for anything.

And because she’s terrified of who the bad guy might be in this, and what her part might be in all of this, she keeps it all to herself instead of trying to get help. *sigh* I get it (and you’ll get it) but it frustrated me!!

A lot going on (already with the head trauma) and every single character was suspect. What’s the motive? Plenty of valid theories…. trust me on this (quite a few mini-mysteries going on in her life). But I had no real clue if I was actually “seeing” the characters through her? Hard to explain (but you’ll get it if you read this). All that to say, I never had that elated… “I KNEW IT!!!” moment of delight.

Or even better? That moment of OH EM GEE I DIDN’T EVEN SEE THAT COMING!! GASSSSSSPPP!!! But nope. I didn’t even get that (which would have been awesome).

I *did* figure it out eventually, but it was kind of almost obvious by then. Although… there were even moments of doubt until the very end for me.

And in the end, it had some heart… sure, but it didn’t give me chills like the beginning of the book did. Fine for a rainy afternoon if you’re in the mood for a “light” thriller, but not unputdownable (in my case, at least). 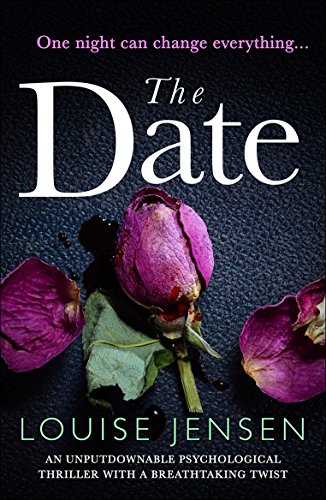 I had to know what was going on, so I persevered. I wanted to be shocked at the end.