The Harlequin (Anita Blake, Vampire Hunter, Book 15)
Book # 15 of the series. This was definitely not one of my favorites. Unfortunately, I’ve forgotten some of the story since it has been a week or so since I’ve read it. I usually retain almost every bit of a book that I’ve loved, but with this series, I don’t know if it is because there are so many of them, that they are simply running into each other in my own memory, or if it’s that I am a little more bored with this series.  However, since I have followed the “Anita Blake” crew from the start, I still appreciate my time with this set.

A quick overview: This is about a group of Vampires called “The Harlequin” (almost like a “secret vampire policing agency”) that investigates, and has the right to “dispose of” other Vampires that are not abiding by the Vampire laws. Unfortunately, they set their sights on Jean Claude, Anita and their entourage, but as time progresses, our Heroine discovers that “The Harlequin” are also not abiding by the rules, and yet again, another metaphysical fight for their lives ensue.

What I liked? Some touching scenes between Anita and her men (Richard in particular). Richard, like usual has some clearer, more accepting, moments of the situations at hand. One particular scene is when Richard, one night, decides to take comfort in Anita and her entourage.

“Ok I love Anita. I’m trying to learn to love all of her, even the part that wants to live with two other men.”

I also thought Edward’s character (he’s back in a big way!) was very human in this novel. We also see a new side of Micah, although, it is somewhat shortlived, as he is not prevalent in this installment.

Of all the people in the room,I hadn’t expected problems from Micah. From the look on Rafael’s face, him either. “I meant no disrespect Nimir-Raj”.

What I did not like as much: Richard has his “fits” again (so the constant push-pull is prevalent in this novel). We have a TON of characters in this book, and therefore nobody gets real one on one time. It’s just a constant whirlwind of conversations, love declarations and angst (lots and lots of angst)! I like angst in books, but more so when there seems to be some sort of happy resolution and completion in the end.

One of the softer “angst” moments:

Requiem squeezed my hand and gave me one of his rare smiles. “I take no offense my evening star; he hates what I am, many people do”…

He stopped closer to the door and Edward, away from Dolph, but turned to the big man. ” ‘Darkling I listen; and, for many a time I have been half in love with easeful Death, Call’d him soft names in many a mused rhyme.”

“Are you threatening me?” Dolph asked in a voice gone cold.

“Then what did he mean by that?”

“I don’t care what he’s quoting, Anita. I want to know what he meant by it.”

“What it means,” I said, meeting Requiem’s blue blue gaze, “at a guess, is that he’s half-wishing you’d pull the trigger.”

In the Anita Blake series, I never get that sense of relief. Perhaps that’s why I keep coming back for more. I am bound and determined to see it through until true love finally shows. Yes, I know that the concept of this series is that “true love” exists amongst the whole group and Anita (not one is more loved than the other), but my own socially conscious mind, cannot wrap itself wholeheartedly around this concept. Come on…she’s got to have a favorite!!! I know who I vote for! What about you? 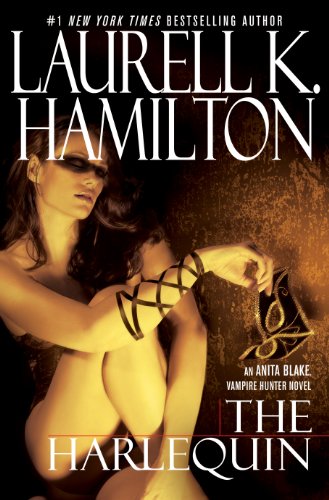