X
You are here: Home / My Book Reviews / Book Review – The Kind Worth Killing by Peter Swanson

The Kind Worth Killing: A Novel
Another psych-thriller highly recommended by my “psych-thriller” crew, and I drove Sadie nuts when I just wouldn’t read it. LOL!!!! Months and months and months, she’d bring it back to our book-discussions and remind me… in a book-slump? THIS ONE.

Sadie: When are you going to listen to me with my psych thriller reccos? i am throwing large sacks of peanuts did you start either of them?

Maryse: okay I know the Kind worth killing…

Sadie: Yay!! You will like it. TKWK is more adult and Dangerous Girls is more teen but they are both thrillers that I kept me on the edge of my seat… I’m going to add the kind worth killing to my favorites list to entice you to read it Tehehe

And now I can finally say I read ’em both!! YAY ME!! Sadie and I have VERY similar taste in books (especially the psycho-stuff) so I one-clicked it almost a year ago, but held back due to my hesitation in terms of my own personal interest – murder plots and detective crime drama stuff. You the genre. However THIS one was mostly from the POV of the plotters, and I do love a good “crazy/bad-guy read”. Although you’re not quite sure who the bad guys are, in this story.

Er… no. Scratch that. Tee hee!!! They’re pretty much all bad. *phew* I’ve never disliked a set of crazy-ass characters more, and still absolutely HAD to read the entire thing to find out who wins and who loses. If anyone wins. Or loses. LOL!!!!

When I announced my huge love for Dangerous Girls and mentioned that I wanted to read a second psych-thriller, ’cause I needed more, look what came back up! 😉

Sadie: The Kind Worth Killing!! Yes, read that next …Yes it was just a fun ride!

Maryse:  I have it!!! I one-clicked that one, awhile ago too!

Tracie: Yessssss!!! The Kind Worth Killing. 1000x yes! … Ha!! Just wait till the end I know I was shocked a few times and I have to say I’m so thrilled you’re reading this!!

Mandi: One of my all time favorites!!!

This was a mentally exhaustive ride, loaded in backstabbing, crazy twists (by the halfway point, TWO BIG ONES!!) and while there was certainly one true “controlled” psycho in the bunch, they all have a special spot in hell awaiting them. Maybe different levels of hell? 😉

A mega-rich guy is awaiting his flight, drinking at the airport bar and ruminating over discovering his wife is cheating on him with the contractor they hired for their new mega-house overlooking the water. He’s good to her, he loves her openly and unabashedly, he gives her everything she’s every wanted, never complains about all of the money she spends, and still, she disrespects his love for her.

I thought of her as someone whose every emotion was on the surface, someone incapable of deception. How had I been so wrong?

While sitting and waiting and brooding, a pretty, almost ethereal woman drinking next to him, starts chatting him up. She’s the complete opposite of his “bombshell pinup-star” looking wife, and since they’re strangers and never expect to see each other again, he confides in her about what has him so upset. And she proposes a solution.

…along came this passenger who was suddenly giving me the moral authority to act on my desires.

And while I was HOOKED in the first half, and thrilled when it surprised me, not once, but twice, the second half (also good!) had me slowing down, significantly. Things became a bit convoluted and messy… far-fetched at times (well the whole darn thing is obviously far-fetched), but to a point that I was certainly doubting how this was going to work out for them. Yikes.

But there’s always a smart one in the bunch. Until there’s a smarter one. Life and all of it’s bumps. And I’m stopping there. 😉

Well-written, well thought out, and creepy enough to keep me reading, I wasn’t in love with the book as a whole. I was thinking more along the lines of 3.5 stars (just ’cause at this price? I was expecting shout-from-the-rooftops awesomeness). That said, I’m upgrading my opinion to 4 stars! What salvaged this story, for me was the kicker in the end. Two “kickers” in fact. But that last paragraph? *oomph*!!!!!!! An interesting, and clever “full-circle” effect. 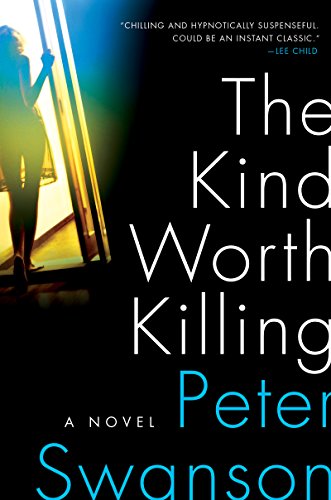