X
You are here: Home / My Book Reviews / Miscellaneous / Book Review – The Mating by Nicky Charles

The Mating: The Original Law of the Lycans Story

I accidentally came across this free e-book and almost bypassed it until I saw the huge number of positive reviews on iTunes and on Goodreads. I wondered…were they positive reviews, cause it was “good, for a freebie” or was there something more to the raves? Sometimes, free doesn’t end up being worth it if you feel you’ve wasted your time at the end of the story, you know? After reading the summary (intriguing), and numerous reviews (everyone seemed extremely excited about it), I decided to give it a try. Free huh? I can’t believe how much I lucked out on that one cause, in this case, this book lived up to it’s reviews, and then some!

It’s a book about two neighboring werewolf packs that are forming an alliance. The alpha of one, gives away his adult (but young) daughter, Elise, in a “mating” to the new alpha of the other pack (Kane). It is a customary and accepted practice, however she’s already in love with another member of her group. But for the good of her people (the pack always comes first), she relents, and the ritual is performed that very night.

Leaving her pack, where she has grown up all of her life and saying goodbye to her friends and family is already difficult enough, but having to share a bed with a stranger, and not the one in her heart, is devastating.

The covers rustled beside her and then she felt his finger move across her cheek, catching the tear. “I’m sorry, Elise.” Kane’s voice was deep yet gentle.

“It doesn’t matter.” She answered quietly, still staring at the ceiling. What he was apologizing for, she was unsure. For mating her? For the inevitable pain the first time brought? For the fact that she was now bound to him for the rest of her life, despite her love for another? Perhaps he was sorry for all three, yet they were as beyond his control as they were hers. She swallowed hard. “It couldn’t be helped”

“No, it couldn’t,” he agreed, sighing heavily. His arm slipped around her waist and drew her closer. She let her cheek rest against his muscular chest, too spent to protest; the sound of his steady heartbeat faintly comforting. “I wish I could have given you more time to get to know me before we mated…”

Yup, him holding her, apologizing for their awkward situation, as she cried in his arms…whoa. That hooked me. I had to find out more.

And let me tell you. This is not an easy task for her. While the new man in her life is considerate and fair, we mustn’t forget that he is an Alpha (super-Alpha actually – the MINE thing is rampant in this book). This alpha comes with responsibilities and dominance issues that supersede her need for comfort and reassurance. Until her ex shows up, of course 😉  Hehe.

“You are mine, Elise, my mate. No one else can touch you and make you feel the way I can – only me!”

And what good is a story if we don’t have a villain or two? In this installment, Elise’s ex is not the only issue troubling their already struggling union. Kane also has an ex-girlfriend, and she lives within the pack. Yup..his evil ex, and a “rogue” brother whom they suspect has become a threat to them all.

These books (plural? – yes it’s now a trilogy) are long, rife with detail, but not enough to detract from the unfolding of the events (at least not to me). I’ll admit that I found the writing in book#2 a bit “improved”, however book one was plenty fine. There were a few eye-rolling moments where you just wanna shake some sense into Elise and of course, some clichés, if you will. 🙄 I dunno… hehe…but if you just “let it go”… you’ll enjoy it. It’s still good fun.

Drama, personally touching moments, danger, possessive jealousy, camaraderie, the sense of family and betrayal. You get it all here. Oh, and some of my favorite moments. The scorching passion…although how it all works out, I’ll let you find out. After all, it is free… what do you have to lose?

Interested in the series —> Nicky Charles – The Mating Trilogy 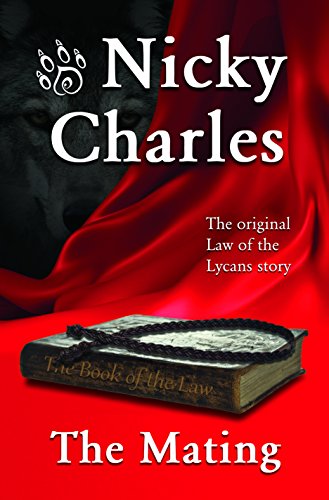 I love theses book and is there a movie to the as well and if there is where and I find it!