X
You are here: Home / My Book Reviews / Book Review – The Renfield Syndrome by J.A. Saare

The second book in the series was consistent with the first in terms of my non-stop read-a-thon. Good flow, sarcastically witty heroine, and a hero (*ahem* or 2 😉 ) to swoon over.

But, do you remember how the last one ended? She made a deal with a demon. Well… I say she actually didn’t, but you know how demons are. You can never win with them. Full of shenanigans and malarky to get you all disocmbobulated and saying… “Wait. What? Wait. NO!” And then they’re all…. “Ah-ah-ah. Nope. You made the deal”, and now *poof* you’re in over your head in craziness. I hate when that happens. *grumbles* stupid demons…

One minute I was in my apartment ready to get back to my vampire boyfriend. The next I was making a deal with a demon and getting my ass sent to the future as a part of the bargain. It couldn’t be real, but damn it, the concrete sure did feel cool beneath my jeans, and my busted knee throbbed like a son of a bitch.

So not only was she tricked into a “seemingly” do-able deal with the demon (that proves to be anything but), she was also sent 101 years into the future to make things even harder. Same city, different world. Barely any cars on the usually busy streets of NY, barely anyone walking around, and the few that she does see out, are scrambling for cover as the sun goes down. Eeeeeep!!

Well that’s okay. She knows where she is, and all she needs to do is find HER vampires to get herself situated. After all, vampires live forever, and it’s only been a hundred years. How bad can it be? She can still keep her end of the demon bargain as long as she gets back to Disco, right? And then all will be right with the world.

And as she sets off to find her old life in this new world, she is snatched up and pretty much kidnapped by fatigue-covered vigilantes. Taken to a locked-down commune, and promised that once she has spent enough time away from the “brainwashing vampires” she will want to stay with them.

Rhiannon soon finds out that a vaccine/virus injected into humans (created by the government to kill off vampires)… well. It had side effects. And the majorty of the human population succumbed.

Humans were vanishing. Not as in gone missing, as in they were ceasing to exist as a species. Something called the Renfield Syndrome…

Those that didn’t get the vaccine and are still alive are hunted by the verrrry hungry vampires. Or being captured by them as “pets” (and feeding vessels… and “other “vessels”), and with that kind of power-structure comes an opposing rebel-group. Armed, rebel populations protecting any humans they find. Ergo… her situation.

I was worried about Disco, without question. My lover had no idea where I’d been for the last century. Which got me thinking about everyone else. What happened to my old boss, Hector? My co-workers Deena, Cletus, and Butch? The Black Panther Club, where I worked as a bartender? Then there was the vampire family I was a part of – with Paine and Nala being in the forefront of my mind.

And that was just the very beginning of the book. The story goes all-out. Quite a few surprises a long the way as Rhiannon’s vampire family has been altered significantly since her “disappearance”. Things have changed. The powers that be, have changed, new paranormals (and parnormal wars) come to light, and the pain she encounters as truths unfold lead her on a path of righting all sorts of wrongs.

Things is… she makes a few mistakes of her own. Or does she?

I’m still trying to figure it out 😉 And hopefully, that is where book #3 comes in.

Did I love it? Well, I liked it a whole lot. I just wish… hrmmm. That there was more… *love* mixed in with the action and danger. I mean it’s there, and it is SO important to the storyline as a whole. As important, even. Lots of angst, heartache, love and emotional confusion and uproar. However, considering just how important the emotional & romantic aspect of the book is, I just wish we got to “play” in it a a little more. It just goes so fast.

Now I’m not talking about the “steamy scenes” although I’ll never say no to those. But more in terms of the personal one on one moments, that would normally have me catching my breath and daydreaming about the “situation” all day while at work. Longer moments… more of them, and I’d say this could be *squee* worthy. It has all of the right elements for me, just not “enough” of it for me to be absolutely taken with… “it”. I can’t say what “it” is… because again. You’ll see.

Now  you might say, “but Maryse, it’s “Urban fantasy” and the “romance” is usually secondary in this genre”. True. But I don’t feel that is t the case, here. The romantic aspect is BIG. All-important. And I just need more one-on-one time… for me to connect to “them”.

Okay so that’s it. Great read. Enjoyed it from start to finish and because of that, I think I’ll give it 4 stars. I was leaning again, towards a rating of 3.75 stars because I’m not as emotionally connected as I’d like to be, but it was plenty entertaining and had more angst and an *oomph ruh roh* that gave me a nice little thrill so… 4 stars. 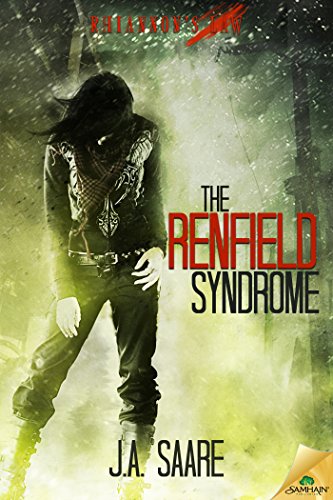 OMG! I’m afraid to read this book and find out what happened in those 101 years. Have you read the third book? It gets better? There is more romance?