X
You are here: Home / My Book Reviews / Book Review – The Widow by Fiona Barton

The Widow
BLURB JOLT alert and I got it on super-sale. I one clicked it SO hard considering some of the reviews and recommendations and I was dying to get to it!

bev: Maryse?? Have you heard of The Widow? Just saw a A review for it. Guess it is a psych/thriller/mystery type like Gone Girl and Girl on the Train. A bit tempted.

Leah: Just finished The Widow by Fiona Barton, a good one if you want psychological suspense. Her husband has died, but was suspected of *spoiler*. You start to wonder did he really do it? And then: did she have anything to with it.

Amy: I actually JUST clicked The Widow over on Amazon and then came here to share how great it sounds, but apparently bev beat me to it. Great minds think alike, right?

It DOES sound like it’s going to be a fabulously interesting one.

Maryse: I’m reading “The Widow” and I have no idea what’s going to happen, and am enjoying it for the most part, except for all the detective’s parts. I’m always interested in the bad guy and the victim, but never the police-procedural stuff…

bev: I hope in the end The Widow works out for you, Maryse.

Maryse: Me too bev… I’m in “court” now (a court case… but I know this story is going to twist into so much more than this mystery).

Jen C: Oooh I’m reading The Widow at the moment too. Only a few chapters in and really liking it.  I’m kind of excited to hear there are detective bits and court bits to look forward to?! Kind of work coming to life lol.

Yep! Some of us love that extra detective stuff in it (and with good reason) but I tend to want to stick to the two main characters involved, when I read. So for that, this one was a little slow for me (even though it kept me guessing the whole way through), but definitely a cautionary tale worth reading, especially in our day and age. HOLY MOLY this is why we have to be careful, especially when we’re online, my friends!!!

I won’t say too much about where this goes (reveals or even the underlying HUGE issue at hand), other than the subject matter IS disturbing, but thank goodness, NOT detailed. Either way, it will make you uncomfortable. Strangely enough, this book isn’t SO much about that, as it is about uncovering a mystery (solving a crime) and the wife (now a widow) dealing with the aftermath, and “aftermath” deal thing with mystery of it all…

I’m a passenger, not the driver, I wanted to tell him. Anyway, the pills should let me carry on being Jeanie when I need to be.

…And us, the reader wondering WHO is the guilty party, and how it all played out.

It all comes out, but oh boy does it take its time. In fact it is delivered via multiple POVs (from the wife, to the husband, to the detective, to the reporter, to other victims and suspects involved) and anything and anyone is a suspect at first. That was a bit juggle-worthy in itself as I was trying to situate myself in the story, but then the back and forth (from past to present in multiple POVs) made this one somewhat drawn out, and tedious. I liked it. I had to know WHERE it was going. I was SURE there was a twist somewhere in this whole psycho-drama, an while I will admit to be a little delighted in a certain twist (YES!!!!), it was overall… underwhelming despite the overwhelmingly deplorable topic.

Jean was both grieving and relieving from the recent death of her husband. He’d been hit by a bus and killed instantly, in the street.

Everyone was very kind and trying to stop me from seeing his body, but I couldn’t tell them I was glad he was gone. No more of his nonsense.

That said, he’d also been the recent subject of police and public scrutiny for a crime he was suspected of committing. So much *suspect* activity surrounded her husband… and yet, some others, also.

Did she know more than she let on when or even before it happened, or is she a victim of a predator, too?

He didn’t welcome my company when he was on the computer. When I used to take him a cup of coffee, I had to knock before going in. He said I made him jump if I suddenly came into the room. So I’d knock, and he’d turn off the screen and take the cup off me.

This is the main theme of this story as we come in and out of her POV (and that of many others), reliving, and LIVING their lives, with and without him in it.

I didn’t want to think about it anymore. It was too hard to keep everything apart in my head. My Glen and this other man the police talked about. I needed to keep things straight.

I wanted to believe him. I loved Glen. He was my world. I was his, he said.

Good. I contemplated DNF’ing it only because it wasn’t as crazy as that blurb lead me to believe (oh I had the ultimate blurb-jolt on that one) and I had a hard time connecting to her (the one I TRULY thought would have me addicted to this book)… let alone the other multiple POVs that the author wanted us to explore.

3.5 stars <— Interesting, and well written, but convoluted, slow, and not as twist-worthy as I expected it to be. 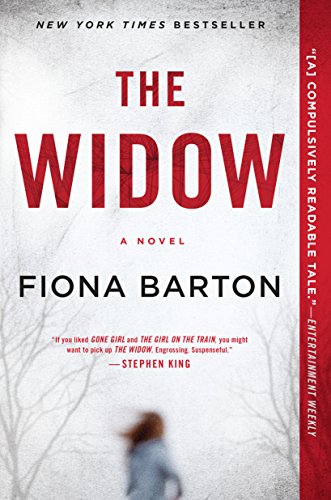 I’m with you—This one was missing that electrifying thrill that I was hoping for. I didn’t find it to be very compelling. I read I Let You Go by Clare Mackintosh a few months before this one and found that one to have that extra oomph and twist that this one was missing.

Sorry it didn’t work out for you, Maryse.

I have I Let You Go in my overdue library stack.