Undone: A Novel
*Ooooof* What a book. I feel depressed right now. Having spent so many hours in this crazy mind-mess of a story, that at first, beckoned me with the promise of a forbidden psychological thrill. With the creepy-handsome main character and his angelic-looking 17 year old student and their intricate plotting (using her seductive powers and his outlandish ideas) to steal quite a fortune.

Going by some of the reviews (glowing praises by HUGE names in the industry), it promised to be a wild ride. For sure an uncomfortable one (considering a few taboo-angles it was weaving me through), but my mind was going all over the place with the possibilities, potential scenarios, and I was hoping for that big-bang ending that was sure to knock my socks off.

Maryse: YESSSS This will be the “forbidden/taboo” list for sure. I’m into it, thinking I know what’s coming… cringing, and yet I can’t stop. Yep… slow burn for sure, but in all the wrong ways. Yikes. It’s hypnotizing to be sure, but soooooo OH NOOOOO and yet… I read and I read and I read it….

Maryse: …it’s a risqué, taboo read that has received plenty of accolades, and yet, toes the line of too risqué for some. When you’re reading something significantly sordid, thinking you knew what the “sordid” part was from the beginning, but it turned into something so much more… sordid. It’s all sorts of moral distress.

Cheryl: I had to look up ephebophile to make sure what this book is about, not to mention the blurb that just ends on an incomplete sentence. *blink-blink* This seems disturbing on so many levels.

Maryse: They call it a “black-comedy” but I don’t get it. There’s been nothing “comedic” at all… other than, I guess the “bad guy’s” crazy internal dialogue and musings… Maybe that’s what they mean by “black” comedy? But this is NOT a comedy by any means. It’s morally disturbing on all sorts of levels, and I’m actually a bit scared as if it might be a psych thriller. And of course, it’s certainly got the taboo-part down. WOW!!!

bev: It definitely seems people love or hate it. I think black comedy can be a tricky thing to pull off. I’m curious to see your review.

Instead, I was at my wits end, by the end of it, and I’m so relieved I’m done. I think I’ll be frowning and annoyed for the next 24 hours at least. It absolutely infuriated me, drained me, and exhausted me. And I think it kind of insulted me. Ugh. I don’t know what to say. Did I like it? Sort of. I dunno. Do I hate it? Sort of. I dunno.

It was disconcerting, dreary, depressing, desolate, and so destructive. Left me in a dark cloud of disquietude. LOL. I over D’d it, didn’t I? 😉 But those words perfectly describe the “feel” of this book, or at least how it left me feeling. I feel like I did after watching a “A Clockwork Orange”. Just… uggggh.

Dez has a proclivity to teenage girls, and has lost his law-career and his teaching career over his inability to keep it in his pants around them.

But his er… charms (and good looks) have manipulated one lost soul… a seemingly innocent seventeen year old beauty (the student he lost his latest job over) named Chloe, to be his girlfriend.

She loves him and will do anything for him. He finds her clingy neediness overbearing, and contemplates skipping out on her,

But now, with her mother having contrived to join her father in violent, untimely death, she was officially an orphan, Dez her sole protector. He did not relish responsibility even at the best of times, and these were hardly that, with his bank balance fast dipping toward zero and no plans for how to replenish it.

He had thought more than once about ditching her— packing his few possessions into a bag and slipping out while she slept, lighting out for California, Florida, Mexico— anywhere but here. But he had somehow not been able to do that. There was something about this one that had gotten under his skin.

but when he realizes her deceased mom once had an affair with a now rich and famous author,

“Before I was born,” Chloe said excitedly. “When Mom was working as kitchen girl at the New Halcyon Country Club. He was the tennis teacher! They had a fling.

…he decides to take advantage of Chloe’s devotion. She’s going to claim that she’s the author’s illegitimate child.

Ooooof! That monster of a main character wore me down. The perfect example of a narcissistic sociopath, or maybe even a psychopath? I dunno. I’m no psychologist but I think he’s one of “those”.

…it was living proof that his own dramatic fall from a life of comfort and respectability (a fall precipitated by the most natural and insistent of all human impulses) was anyone’s fault but his own: it was the fault of a sick, silly, hypocritical society, a society in its death throes.

And while there wasn’t any violence per se, the way this character wormed his way into, and leeched off of his victims was downright savage. I won’t say more, but if you read it, expect to be appalled at what he’s willing to destroy, to satisfy his gluttonous desires.

I also struggled with a certain aspect of the writing. It certainly has an eloquent, intellectual-writer quality to it, but (and this is the only thing that “bugged” me) the internal musings and descriptions felt unnecessarily wordy, by way of extreme run-on sentences laden in embellished descriptives. Sure, it sets the scene and “mood” of the world we’re entering, but it eventually wore on me. I found myself reading and rereading parts that that I could barely get through (my mind would start drifting or I’d start skimming), just to realize a paragraph was just one HUGE, flowery sentence. Ah.

I’m wordy by nature, so I feel as if I shouldn’t talk, but this could be a bit much. But now that I think of it, I’d be interested in knowing if the run-ons were when we were in the main sociopath’s perspective. Perhaps it was done purposely so to annoy me when we were in “his head”? Hmm… something to consider.

I dunno. Plus the whole “black comedy” thing. Maybe I just don’t get the whole “satire and black comedy” descriptives, ’cause there was absolutely nothing funny in this story, to me. Not even that monster’s internal musings. It just made me feel crazy and forlorn.

Some things were far-fetched and yet some things were quite clever. As awful as some of the characters could be, as horrible as things got for some of them, and as shocking as some moments were (morally reprehensible and HOW could anyone do that?!), there were moments of relief, and personal growth. Of realizations. A shimmer of light at the end of this long and dreary tunnel.

I know, on some deeper level in my future, when I have overcome my annoyance, I may “like” it better, due to it’s unforgettableness. Or I may hate it more. That’s how I feel. But you know what? It’s a sure thing that I’ll NEVER forget this one. Maybe I just can’t see past my perturbance right now.

I’m so scattered right now. Go away book. You’re in my personal space. I need to think. Or I need to stop thinking. 😉

P.S. Thank you to the author for sending me a review copy.

P.P.S. For the UK readers ➔ Undone by John Colapinto on AMAZON UK 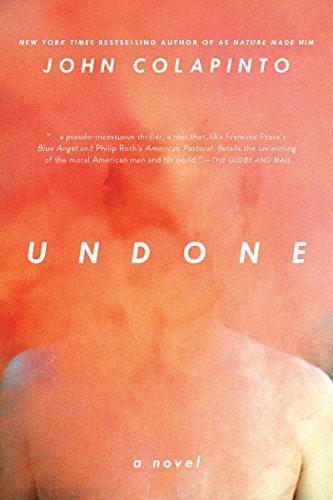 Well.
It left an impression.

Holy moly, Maryse…this one put you in RARE form! Has this ever happened to you before because of a book?? I think this is the kind of review we all worry about when we rec a book to you, LOL!!!

Yes this one did a number on me for sure.

Love what Amy said…. I inundated want to read it just to see what you’re saying

You’ve intrigued me with this review!

If you read it, let me know Sadie.