Untamed (House of Night)
Having so many responsibilities, and being everyone’s darling, isn’t all it’s cracked up to be. Zoey learns this quickly as her friends ostracize her for not having entrusted them with her predicament. And the girl with too many boyfriends finds herself single and lonely when her boyfriends (plural? yes…long story) become absolute exes because of her mistakes.

She has hurt many (especially herself) in her first few months at vamp school, and is now suffering the consequences. Hey! who said being specifically “chosen” by their virtuous Goddess “Nyx”, means she’s gonna be perfect? Zoey’s still mostly human, despite all of her powers, and her inexperience is giving her a run for her money.

But here’s the thing. When it comes to why her friends are angry at her, they simply don’t “get it”. Since the “real” enemy is able to read everyone’s mind (except for hers and Aphrodite’s), she can’t let her best friends (her crucial “circle”) know anything. What they know, the enemy will surely find out. But luckily, Zoey finds she can trust the one person that used to be her sworn enemy. Aphrodite’s no fool, and her own familiarity to Zoey’s current issues allow them to connect, and re-establish themselves in their fight against evil. Because, we were all wrong. Aphrodite was not the evil one.

Aphrodite. May I just say… you rock! I hated you (and now I understand why my mom always says “hate” is too strong a word to ever use). Really, I simply misunderstood you, and you have taught me a life lesson. Often, a person’s anger and acting out is a symptom of a deeper issue. And it wasn’t your issue, Aphrodite. It sorta was everyone else’s. Oh sure, you’re still conceited and arrogant sometimes (always).

“So you really think my hair is perfect?”

“It’s as perfect as your shallow, pain-in-the-butt attitude,” I said.

There’s more to you then just the “beautiful, rich, snarky, mean girl”, isn’t there? And you proved your worth when you didn’t abandon the one person that was abandoned by everyone else. And for that I declare you a true hero of this book!

But I digress. This book is not about Aphrodite, but about how Zoey get’s her groove back 😉

This book delves (quite nicely, I might add) in the agonizing turmoil of ex-boyfriend longing and drama (fantastic improv Othello scene) and another fast-food run in that broke my heart! NOT to be missed!!.

Erik looked at me. His blue eyes were absolutely expressionless, which felt completely wrong. Those same eyes had shown me happiness and passion and warmth and even the beginnings of love. Then they’d shown me hurt and anger. And now they showed me nothing at all? How could that even be possible?

However, the story actually revolves around solving the puzzle of these new vampires, keeping Zoey alive (well duh!) but even more so because of Aphrodite’s awful visions of an impending vampyre/human war.

“I saw it all happening because you were dead, Zoey. Your death made it happen.”

We also learn more about what Neferet is really up to (which their Goddess Nyx warns them about):

“But you say that Neferet has been listening to someone else’s voice. Does that mean she isn’t your High Priestess anymore?”

“Neferet has left my path and has chosen chaos instead.” The Goddess’s imaged wavered. “But remember, what I have given I never take away. So do not underestimate Neferet’s power. The hatred she is attempting to awaken is a dangerous force.”

Someone else’s voice? Yup…someone or something very powerful is about to make an appearance, and Zoey is obligingly entrenched in the whole mess (even more then she can imagine).

And we find out how Zoey (and the “new” Aphrodite) factor in.

“You both have a long road before you, Much of it you will travel together. Depend upon one another. Listen to your instincts. Trust the still, small voice within each of you.”

So of course, the saga continues, and contrary to the past books that seemed to be a little hrmmm…”anti-Christian?” well – is that too harsh? I dunno. Anyway. The past books in the series had a very wiccan/pagan feel, but the author introduced a nice little “Christian” touch to this one (one that I can appreciate). Oh and a few “new” men are added to Zoey’s mix. As if she needed anymore emotional tension.

But I sure enjoyed it! So let the drama continue! 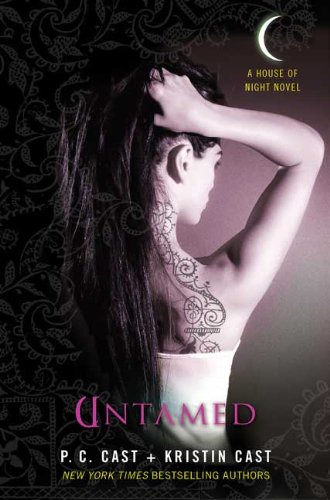 Zoey does get a little off track, but remember, she’s still a teenager. What teenager do you know makes good decisions 100% of the time? None…is about bad judgement & questionable behavior most of the time. Zoey will redeam herself. And Aphrodite…didn’t I tell you?? LOVE, LOVE, LOVE her. I wish I was where you are…just starting the series and you still have 4 more books to read…Glad your loving it like I did.
Thanks for the posts…

Oh I know how you feel. Whenever I hear someone is starting the Fever series, or the Black Dagger Brotherhood series, I always find them so lucky that they’re gonna experience for the first time, all that I once did, when reading them.

I’m heading to book#7 tonight or tomorrow. I just have to get my reviews done for #5 & 6 first. I’m too darn responsible!

Hi, my daughter is 11 yrs gng on 12 yrs. How good is this series for her ? Are there any adult contents or scene descriptions ?

I don’t think that I would recommend this series for someone her age. There are adult-ish situations and these are teens that are 16 and 17 and older. In fact there is a situation with a teen and a teacher at her school.

What would you recommend for her age… which will develop character and values ?