Vampire Mine
As much as I have loved most of the books in this series, on occasion, I hit one that just didn’t do “it” for me. This is one of them. It was “okay”, but not great. No butterflies for me.

I was looking forward to Connor’s story. From one book to the next, Connor would openly scowl at all the blossoming love around him, that tormented his already tortured soul. I thought most of it had to do with Darcy. Remember Darcy, the dying human that was caught in their vampire war that he ended up “turning”? She seemed to hate him for it. She suffered the loss of her human life, and he suffered the guilt for taking it away from her completely. I secretly wondered if somehow… he might have loved her? But no. She already found her happily ever after, and while he was suffering, we find out in this one, that Darcy was not the main cause of his pain.

In this installment, he finds an injured female (Marielle), and quickly discovers her injuries are a result of her wings being ripped from her back. Earth bound, yet still slightly powerful, he realizes she’s a fallen angel of death (she escorts dying souls to Heaven). Her history of insubordinate behavior has resulted in her expulsion. And the longer she stays on earth, the more human she will become.

Connor thinks his own soul is damned (you’ll find out why if you read it – I’m not even going there, since the author keeps that a secret for a long time) but he’s hoping that he can be the one to help her get back to Heaven. His help might not save his soul, but it’s the honorable think to do, as he realizes she is good and pure and doesn’t deserve the ostracism. Her disobedience was for honorable purposes. But the consequences of her actions have caused quite a “butterfly” effect on earth. As the pieces start coming together for her, they conclude that she might be tied to the vampires for a reason.

She can sense death. Connor paced toward the cabin, then back. This was a valuable skill. If she could sense people dying while Casimir and his minions were attacking them, then she might be able to help the Vamps find him.

He glanced up at the stars. Had God sent him a secret weapon that would help them defeat Casimir once and for all? Then Father Andrew might be right. He was meant to find Marielle.

This is a story of making amends with a baneful past, to better a future. A story of self-sacrifice, for the good of all. Connor helps the angel find her earthly purpose, teaches her some lessons in humanity (cute!), and shows her how to use what’s left of her powers productively. All the while, protecting her in the process (she’s now being stalked by a demon). But… there’s a catch! You guessed it. They’re falling for each other. And for the good of humanity, the good-guy vamps and both of their souls, they mustn’t!! Let the emotionally tortured moments commence 😉

He would make sure she remained chaste and pure so she could take her rightful place with the angels.

Besides, touching her could cause her to see why his soul was damned. He could never let that happen. So, it was settled, he decided with a sinking heart. He would not kiss her again. Nor hold her in his arms. Love was always beyond his reach.

Oh and of course, that wily Casimir (the evil Malcontent Vampire) is still up to his ol’ tricks. At this point, he felt more like a parody of a villain than a real one.

It’s “sweet” and I can appreciate the message. I even enjoyed a few twists that came to light. But, while all the romance was there, I barely felt a thing. I’ll even venture to say it felt almost *icky* at times. She’s so pure, and yes, perfectly angelic. Brynley, the werewolf that was also protecting Marielle, yelled it best:

“Fine!” Her eyes blazed with anger. “And you stop pawing the angel.”

Yah Connor! Quit sullying her purity!! Okay, okay, I know. That would be defeating the purpose of this being a “romance” novel 😛 But still…

Oh and of course, we were treated to some goofy Kerrelyn Sparks humor. Always worth a little eye-roll and chuckle:

A little scene when she accidentally knocks him out cold with her powers and quickly realizes that Scots don’t wear anything under their kilts… tee heeeeee!!!

He propped himself up on an elbow. “How long was I out?”

He glanced at himself, then jolted into a sitting position and jerked his kilt down to his knees. “Damn.” He shot a fierce look at her.

She jumped to her feet. “I-I beg your pardon.” Her cheeks grew warm. “Pray, do not be troubled. It is truly a…small matter.”

“Little?” He arched a brow. “Do ye need another look?”

LOL!! There were a few fun moments like that one.

So in essence, Connor was “perfect”, but he was no Carlos (oh yeahhhhh not even close). Nope. And he was no Jean-Luc. Or Giacomo. Or Roman (now that vampire made me swoon!).

Now let’s discuss the next book expected in the series (“Sexiest Vampire Alive“). Who thinks this will be Phineas’s (aka Dr. Love’s) book? Sounds like something he’d call himself, and considering his little friendship with Brynley… 😉 But then again, sounds like Gregori too. Ah… never mind. I just found out. It is Gregori’s book 😉 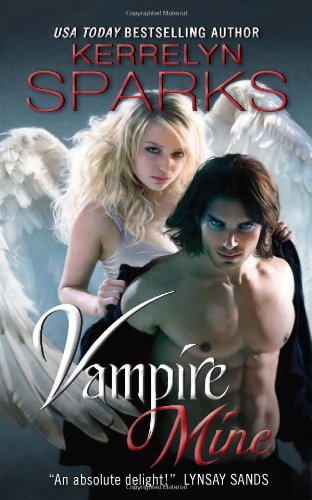