Stranger
I’m on a Megan Hart kick, can ya tell? I can’t stop!! I don’t wanna stop! What am I gonna do when I run out of Megan Hart books?

When Tina asked me…

Maryse: OMG Broken. BUT. Do Dirty first, then Broken. Dirty is almost as good as Broken and maybe it IS as good – but I wasn’t expecting that kind of dark and serious and that kind of heroine. She is so disconnected but wow when you read on, and get too know her and him it becomes amazing.

Tina: is Broken a sequel?

Maryse: it is actually – not really a sequel but in the same town, same characters, they just cross paths. I’m on “Stranger” now and a guy from book 1 (very hot scene) is actually one of the main characters in Stranger and a character in book #2 shows up in book #3 (but I won’t tell u more about that one…)

I certainly recommend reading them in a certain order (as time passes, and you’ll meet up with many of the past characters in further installments) and I’m figuring out that “reading order” as I go. So far, it appears I’m reading the books in the proper timeline, so if you want to read along, I think it’ll work.

And I’m gonna backtrack a bit, before I go onto the review of THIS actual book, as I admit, when I first started them (well, the first one, “Dirty“) I struggled with the sudden “mood” change.

The less bubbly, less fluffy all-consuming romance that had me falling in love with the hero in each book. Megan Hart’s books aren’t really like that, but once you “click” in, you are IN. Very unique stories. Unconventional issues that are explored in detail. I’ve loved each character, sighed and ooo’d and ahhhh’d with them when appropriate, but I’ve not become obsessed with any one hero (like I normally do). In fact, I remember each heroine as much as I do the heroes in these.

As I told Tina, while describing these books to her:

Don’t get me wrong, these are still “love stories” but just… different. Her love stories are simply more “raw” and somber then what I’m used to, but I’m so good with it. I didn’t realize this “genre” was also what I was looking for, but I’m glad to have found it. And there’s a plus. These will just make all that intense alpha-male love in other “romance-centric” books, rock my world even more when I go back to ’em.

And I sort of take it back a little when I say I haven’t become obsessed with any of Megan Hart’s men. Because in this book (Stranger), I’ve fully fallen for “Jack”. If you’ve read Dirty, do you remember Jack? Tattooed, pierced, gorgeous-smile, Jack?

He’d said his hair was dark, but it was impossible to see that under the ball cap he wore pulled low over his eyes. I didn’t recognize the nakeof the punk-rock band on the black T-shirt he wore over a long-sleeved white Henley pushed up on his elbows to show off an intricate design of tattoos beginning at his left wrist and covering all the skin I could see on his arm.

*whispers* You know… that “scene”. You remember… the “piercing”, right? RIGHT!!! THAAAAAT JACK! Well guess what? He plays a VERY large part in this one, and I was thrilled to spend much of the “erotica” with him. And do you wanna know what? He’s not even the only guy in this one, either, but I love his part. Hey! I didn’t mean THAT! Okay I meant role. *giggle*. He is integral to the heroine’s growth and he does a bit of growing himself. *blush* I did it again, didn’t I?! That didnt sound right either!!! *woops* The erotica is getting to me. 😉 I meant… you know. Emotional growth, and stuff! But wow, do I adore him! And we get to know him so much in this one.

I felt the need to ask the author…

Maryse: I’m now reading Stranger and adore Jack. I’m hoping he has his own book, … and would love to read more of him. He’s my type of bad boy (and he absolutely had me swooning in Dirty)…
Megan: He doesn’t have his own book…yet. But Jack’s very popular and I’m quite fond of him myself, so someday…someday…

Seriously? I just gotta *squeeeeeeeee* over that. Jack is TOTALLY squee-worthy. And the ULTIMATE in bad-boys. *sigh*

Jack smiled, and I stared, dumbfounded at the transformation in his face. Without a smile he was gorgeous. With one… incandescent.
Either he didn’t understand this or he’d long ago learned to deal with gape-mouthed women, because he didn’t look taken aback.

For real. Megan knows how to write her men, even if they are not entirely the focus in each of her books, like I had become used to, from other authors.

Oh sheeesh! And I can’t leave out who the other guy is, in this book, ’cause he’s pretty awesome too. He’s a rock star. Well… sort of. Up and coming, anyway. Guitar playing 6’5″ cutie, but that has his own dark streak and regrets to contend with.

The man standing next to me had the dark hair and blue eyes I’d been looking for. The earring. The jeans, deliciously warn in all the right places and the white t-shirt with a leather jacket over it.

Because this is what these books are about. Not just misunderstandings, not even close to almost perfect with just a tiny flaw. Nope. These characters have serious issues, and as human and relatable as they can be, you’ll find yourself wincing at times when they start jeopardizing the very things they love the most, out of fear. That’s what these are about. Past mistakes, growing from these mistakes, and then making them again, sometimes worse then ever.

And with all that said, I’m going to say that THIS installment was less “dark” and morose than the first two. This one had a more normal, easygoing feel. Well… if you can call a heroine who hires male escorts on a regular basis to keep her sexlife fulfilled and lovelife non-existent, normal”, then… there ya go! Ha! But it’s true. That’s sort of what this story is about. “Grace”, a smart, pretty and independent woman from a good family, running the family business (a mortuary/funeral parlor). Thing is, with all of this death and sadness surrounding her, she has a few hang-ups about life… and the living.

Dead was dead, there was nothing else. I wouldn’t know I was dead, so why be afraid of it? Everyone died. Everyone went.

I wasn’t afraid of going.

I was afraid of being left behind.

And she has her own way of coping with it. And it’s working well for her.

Until Sam accidentally walks into her life (a few times), and sets her on a course for something she thinks she never wanted. So where does Jack come in? Here, there… and EVERYWHERE.

This one can almost be considered the “calmer” gentler read between crazy Megan Hart books (and it’s one of her own, so you’ll still be on a Megan Hart roll). Of course, there are still some disastrous moments, and crazy decisions, and a jealous emotion or two. Or six. I love it that way, though!

Oh but I must warn you. Don’t think you’ll be spared from tears in this one. I thought I was safe… and then, at 12:44m, I needed some Facebook support:

Maryse: Reading Megan Hart’s “Stranger” and it’s been a lighter read, ’til now. ** something percent in, and all I want to do is cry. Oh wait. I am. Yep top of my pajama shirt is damp ’cause I’m using it as a tear catcher…

So there you have it. Another great installment. Not my absolute favorite in the bunch, but DARN GOOD!! 4 star good!

Interested in the series? Check out the reading order guide! 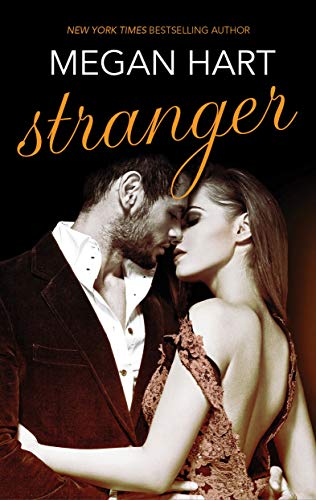 You really should tackle ‘Switch soon……a little more insight into JACK…but the story itself is sooooooo different in the HEA!

Would switch have come before Tempted? So far I’m not seeing any cross over except that Mary from is in Tempted…

You should read Naked after Tempted because that one is about Alex.

Tempted is separate from Dirty…..Naked is about Alex, but before that you should read ‘Everything Changes’ which is Alex’s POV on ‘Tempted’. There is also a short story on Elle and Dan called ‘Reason Enough’ about……babies……!

The only books I read in this *alternate* genre are the first two Fifty Shades books and I’m dying to read the third, but these Megan Hart books keep catching my eye!!! Ah, decisions, decisions….I don’t think I’ll ever have time to read all they books I have waiting in line!!! Thanks for the recs Maryse!

Thanks guys for pointing out my next books! I’m on it!

“Tempted” is a good one! Can make a girl wish her husband had a hot mysterious friend who he liked to share with. I would read that first since that is the full story, and then “Everything Changes” (a shorter version of the same from Alex’s POV). Kind of like how you want to red Twilight before Midnight Sun.

Anna! Tempted was so good, but at the same time, another train-wreck that I couldn’t look away from. I’m still not settled with that one. I’m definitely going to have to continue with Alex’s books for closure.

Read “Reason Enough” you have to read that after “Strangers”.
The book was nice to be back in there life but at the same time left me empty! I want answers and I feel like it left me empty, no answers!

Missy, I will definitely read it. I just finished “Tempted”

Wow you’re deep in her books huh?! hahahaha yeah i know what is this, right now i’m on the same thing with Kristen Ashley books. I read 5 books… one after another, i’m going to the 6º now. Amazing recomendation Maryse. I’m in love with her books. I just finished “the gamble”… cryied a lot.
Well you got me curious with this author. I’m gonna try one of them…. Which one did you like most? Broken?
Do you like these books as much as you liked BD, Fifty shades, KA books? Because is you do, these books are definetely something… lol

Carla… I would say, yes. These affect me as much as last year’s favorites, but just in a different way. While I fell in love in each of last year’s books, in the Megan Hart books, I’m feeling more “intense” and stressed and worried but at the same time fascinated as to where the story is going. This author doesn’t hold any punches. And of course, I’m “pining” for the hero in each… but sometimes, you’ll find yourself wondering who the actual hero in the book is. Sometimes it’s more then just the easy “one guy” answer. These books make me think.

I’m still in “Dirty” and haven’t gotten to any tattooed, pierced, gorgeous-smile, Jack guys yet. I’m so far behind!!!

Ok, I’m confused. As soon as you are able, could you do up a reading order list? I am still reading Stranger, but have already read both Dirty and Broken. So far, I am enjoying Megan Hart’s writing style.

I was looking for another series to read and came across Megan Hart on your website. Love them!!! I am reading Strangers right now and can’t get enough.