Darkfever: Fever Series Book 1
Well now, that was exciting! No romance (well, not yet anyway) but a great intro into what I’m sure will prove to be an edge of your seat, nail-biting joy ride. As I was describing this book to my husband, I explained it to him as part “National Treasure”, part “Stargate” (ok, this is pushing it a bit), and part “Buffy” (well the *feel* of it, anyway). The book is narrated by the “future version” of the main character, reflecting on her intro to this paranormal world.

It is about a Georgia raised, all American pretty girl (MacKayla Lane). Of a bubbly nature, her cheery life revolves around her appearance and the love of her family. Surrounded by a close-knit community, she has always felt secure in her skin, and carefree in what her future holds. While not as motivated as her slightly older sister Alina, she plans on returning to school with her, when Alina gets back from Ireland.

Unfortunately, her outlook on life changes drastically. She receives a call from abroad, about the murder of her sister. Frustrated by the lack of police interest in solving the crime, she heads to Ireland to do some investigating of her own. Listening to a voice message left by her sister just hours before her death, she hopes to find clues and explanations as to the terms of the cryptic message her panicked sister left her.

Once in Ireland, Mac experiences strange reactions by some of the locals to her presence. She also thinks she is “seeing things” when some of the almost ethereal gorgeousness of some local men fall away, revealing monstrous entities of sorts, if she stares at them too intently. Confused, she loses herself in an eerie almost deserted part of town. To her relief, she locates a bookstore and while awaiting a cab, decides to discuss some of her sister’s unfamiliar terminology with the librarian, hoping to uncover their meaning.

This is where Mac’s future will forever change, and uproot her whole perspective on life.

She uncovers that her sister was involved in something “otherworldly” while in Ireland. Through these discoveries, Mac’s own true abilities and nature are revealed (one being that she is a “sidhe –seer”). With the reluctant help of “Jerricho Barrons” (another sidhe -seer), Mac learns that Ireland is being inundated by the “Seelie” and “Unseelie” (different species of Fae), and that sidhe -seer’s can see Fae, resist their magic, and each sidhe -seer has their own unique “gift” to bring to the table.

I burst out laughing.

“This is no laughing matter,” he said roughly. “This is about life and death, you imbecile.”

“I laughed harder. “What, some pesky little fairy’s going to get me?”

Realizing that she is one of a few rare humans that are able to see and potentially fight the Fae, she is forced to partner with the rather abrupt and domineering Barrons. Struggling with her own disillusioned reality, and wondering who, if anyone, can be trusted, Mac realizes that she has been drawn too deeply into this new world to ever be able to escape back to her old illusions, alive.

Secrets. Everyone had secrets. Alina had taken hers to the grave. I had no doubt that trying to ask V’lane questions when I saw the Fae again – I wasn’t stupid enough to think it was done with me – would be an exercise in futility. The alleged prince might answer me, but I was only an OOP-detector, not a lie detector. And Barrons was no better. As Fiona’s little dispute with him revealed, he was keeping secrets, too, and I was somehow in even more danger than I already knew.

Begrudging her sister, Barrons, and her own sheltered deception of a childhood for possibly leading her into this unwanted reality, she fights for her life.

Please make it go all away. I want my sister back and I want to go home and forget that I ever came here. I want to never have met you. I want my life back just the way it was.

“Sometimes, Ms. Lane,” he said, one must break with one’s past to embrace one’s future. It is never an easy thing to do. It is one of the distinguishing characteristics between survivors and victims. Letting go of what was, to survive what is.”

While she still intends on uncovering and exacting revenge on her sister’s killer, Mac’s world proves unrelenting in unwanted action and danger, when she assists Barron’s in a few “recon” missions for a specific book, and other important Fae relics.

Barrons wasn’t turning out to be a good influence on me at all. In a single night he’d gotten me to dress like a floozy, burgle like a common thief, and now he had me cussing like a sailor as I seconded his opinion.

My thoughts? It was fun and held my attention. While I did not stay up all night to finish it, I did enjoy recounting the details to my husband, so I knew I liked it. I specifically LOVED “Mac” and her silly, colorful personality. I enjoyed her sweet and almost prudish ways, and her need to respect her mom’s ideals (ie: she rarely curses, and chooses to use other words to color her outbursts).

You always wonder how you’ll handle a moment of crisis; if you’ve got what it takes to fight or if you’ve just been deluding yourself all along that somewhere deep inside you there’s steel beneath the magnolia. Now I knew the truth. There wasn’t. I was all petals and pollen. Good for attracting the procreators who could ensure the survival of our species, but not a survivor myself. I was Barbie after all.

As for Barrons, I  know from all of the swooning of fellow readers and bloggers, that he will most certainly prove to be  heartbreaker. In this book, however handsome he might be, his irritated mannerisms and somewhat hostile nature do not have my heart fluttering as of yet.

One of my favorite scenes (actually all of my favorite scenes) involve “V’lane (a Seelie Prince) that Mac refers to as “Death-By-Sex”. His presence alone elicits the absolute need to….ummm…do “IT“… (Mac puts this a little better herself), and Mac’s reactions to him are absolutely hilarious. Losing one’s undergarments (by their very own hand) in the presence of a “Death-By-Sex” Fae is apparently a normal, albeit alarming, occurrence.

While Mac was perusing artifacts in a museum…

I’d nearly given up hope of encountering anything of interest when my gaze was drawn to a scrap of pink silk and lace lying on the floor a few feet away to my left, back in the direction from which I’d come.

I couldn’t help but think how pretty it was and walked back over to it, to see what it was.

My cheeks flamed. Of course I’d liked it.

It was my panties.

I snatched them up and performed a hasty inventory of myself.

Skirt, check. Shirt, check. Bra on, good. Thank you, God. Apart from the draft on my bare bottom, and the excruciatingly painful state of arousal I was in, I seemed to be okay. Apparently I’d gone straight to the panties, reached beneath my skirt, slipped them off, and continued walking without even noticing.

Yes, come to think of it, for those scenes alone, I LOVE this book! 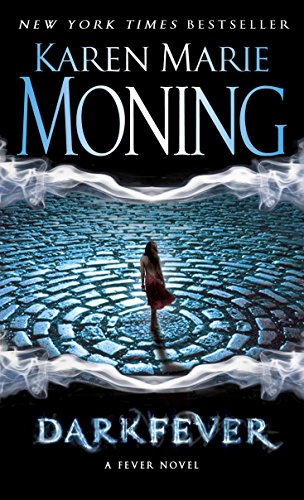 I am still waiting on the frickin fracking books to get here….I really hate snail mail! I will be catching up sometime this week you and reading this one. Just to let you know I finished Kiss of Midnight last night, I am so hooked! I was excited to see the next book is Dante…I liked him!

LOL! I LOVED Kiss of Midnight – sooo many head-games. It’s so wrong that I loved that part, but that book was FUN!

Especially when she goes to see him at the Police Station to “surprise” him even though he called to tell her he’d be too busy to see her that night – HA!

In real life, that might have been a case of “he’s just not that into you” but at her friends insistence (and their “he’ll be so happy to see you” reasoning of it), she goes anyway….loved it. Made their relationship so realistic.