To Tame a Highland Warrior (Highlander Book 2)
Grimm. I need to make an apology. I adored you. Even though it’s been said that Hawk was the most gorgeous male in in the land, and that despite your lavish attractiveness, you didn’t compare to him, after your book, I beg to differ. I nearly fainted with from the over-intensity of your “floor/break the table” scene and yet, I walked away without a comment.

As I chatted with Lily yesterday, I said:

and she so thoughtfully reminded me (while she sorta rubbed it in):

“Can you believe you read it back in SEPTEMBER and still have not done the review?!
Terrible ran those Highlanders down with the 69 Chevelle.”

The intensity continues in book #2 of the series, and Grimm, despite being only incredibly handsome in book #1 (in comparison to the god-like “Hawk”), in this book, everything about him proves him to be Hawk’s equal.

Grimm has been “sort of” in hiding all of his life. A loyal and noble warrior, he has protected and been by “Hawk’s” side for years. However, he has been guarding a secret all of his life (and also changed his name to avoid people putting “two and two” together). He comes from a bloodline with an explosive past that has the potential to carry on into his life (and future). However, the secret is out, when he is summoned with urgency by the head of a Scottish family, and Hawk demands to know what Grimm he is hiding.

“What did you just say?” Hawk asked blankly.

“Grimm drew a deep breath into his lungs and expelled it angrily. “I said Gavrael. My real name is Gavrael.” There would only be one Gavrael in all of Scotland; no other man would willingly own up to that name and that curse.  He braced himself for Hawk’s explosion. He didn’t have to wait long.

“Grimm stands for Gavrael Roderick Icarus McIllioch.” Grimm’s highland brogue rolled so thickly around the name, it was a nearly unintelligible burr of r’s and l’s and staccato-sharp k’s. “Take the first letter of each name, and there you have it. G-R-I-M.”

What’s a Beserker you ask? A sort of immortal, not fully human, human that goes crazy. I guess that’s where going “going beserk” comes from. A Beserker ravages whatever is around them, destroying all in sight. And Gavrael, the Beserker, is Grimm’s father. And Grimm himself, has gone Beserk. His mother was murdered, his village destroyed, and he blames it all on his “Beserker” heritage.

So why was he summoned? As a child, when he escaped and went into hiding, he was discovered by the “Gibraltar” family and fostered. Raised amongst their clan, he once again had a family, security, and love. Over time however, their youngest daughter Jillian fell in love with him (she was 16) he was older, and he felt the need to leave before things got out of hand.

Since his disappearance, she has felt betrayed. Her best friend and confident, the only one she truly related to, was gone. The man that she hoped one day to spend her life with. As a teen, this kind of devastation and heartbreak, can permanently scar a heart. As a young woman, she is beautiful beyond compare, but has yet to fall in love again (despite her numerous suitors). In fact, she plans to run away and join a convent. She has no need for a husband. Her heart has no intention to ever love again.

And her father knows this. He has arranged to bring in a few suitors to woo her. While he will be out of town, he calls in the only one he knows he can trust to protect his daughter, and assure she doesn’t run away again. Grimm. But does her father have something more up his sleeve? Will Jillian accept Grimm back into her life, as angry as she is, at him?

He’s supposed to leave, she reminded herself grimly. She wantedhim to leave. Didn’t she? Her brow furrowed as she pondered the illogical duality of her feelings. As far back as she could recall, she’d always suffered this vacillation where Grimm was concerned: hating him one moment, adoring him the next, but always wanting him near. If he hadn’t been so unkind to her she would have consistently adored him, but he’d made it painfully clear that her adoration was the last thing he wanted. And that obviously hadn’t changed. From the first moment she’d met Grimm Roderick, she’d been hopelessly drawn to him. But after years of being brushed away, ignored, and finally abandoned, she’d given up her childhood fantasies.

And can Grimm face his past, and ever be sure that he won’t turn into his father?

We canna help it son… we’re born this way. Senseless killers – and worse, he was a Beserker to boot. Even without summoning the Beserker, his father had killed his own wife. What would the inherited sickness of the mind, coupled with a Beserker, make him capable of?

I loved this one! Grimm would rebuff the heroine frequently (which I loved)…

He looked out over the loch. “Um?”

“I know, lass,” he said softly. “You told me that last night. It seems all our little ‘discussions’ end on those words. Try to be a bit more creative, will you?”

… while constantly teasing her with his incredible masculinity, and again, there was always the romatic threat of two other sexy suitors vying for the girl.

This was all a push and pull tease-fest, and I enjoyed every moment of it. Romantic to the extreme, but not eye-rolling-ly so (at least not to me). I mean, yes, it is full-on romance, but the author definitely enjoyed playing with her readers a bit (and driving her characters crazy). And while one of Jillian’s gorgeous suitors has his mind set on winning Jillian, the other (sweet and handsome and deserving as could be) could really win her heart also. Grimm is determined to set his unwavering feelings aside if he wants what is best for Jillian, but well, you all know how that goes 😉

Oh and…what’s up with Grimm’s past? Excellent part of the book! This one is not to be missed. I’ve read that Karen Marie Moning is not as fond of her “earlier Highlander books” (which this one is), but personally, I think they are great reads. 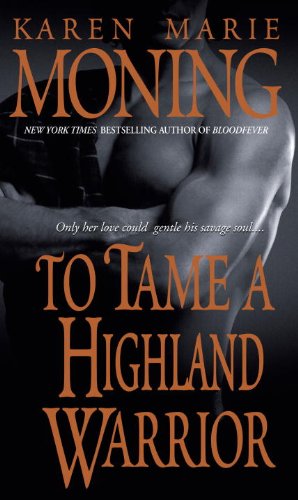 Wonderful review. Loved it, and if you didn’t have me around to harass you, where would you be??

I loved all of her Highlander books. I read them way back before Barrons came along 😉 I would really like to see all of them continued: Like- I HAVE to know what happens to Christian! Okay well she could just write his story and I’d content, lol.

Great Review…I was told that I needed to read these..and by the sound of you review,,,Im thinking i will,,,Im soooo behind this year its not even funny…
as always thanks for sharing
Jennifer

You said “And Gavrael, the Beserker, is Grimm’s father.”

This is not true. Grimm is Gavrael. He told Hawk his full name… “Grimm stands for Gavrael Roderick Icarus McIllioch.”

Thanks for the clarification Lin!