Single White Vampire (Argeneau)
I am getting the impression that this was the first published book in the series, despite it being #3 in the actual reading order. It seems this is the one that introduced the readers to the Argeneau clan, and was certainly quite a hit. I agree with the fans! It was extremely witty, and I fell in love with Lucern’s grumpy edge, and chuckled at Kate’s insistence in getting her way with Lucern, despite his extreme resistance. Subtlety is not part of Lucern’s manner, and he has no shame in not wanting to please those around him.

Lucern is an author (and has been for hundreds of years). He has recently tried his hand at “vampire romance” with great success. While he was actually writing historical biographies of his family, the publishing agency had no questions about the “romantic fiction” he was submitting, and categorized his works accordingly (considering that vampires are unknown amongst mortals – what’s there to question?). While Lucern had worked out an unusual deal with his editor (basically, don’t bug the author about anything, no public appearances and just publish the books!), he was dismayed to find out he was assigned a new editor (Kate Leever) who had NO intention of accommodating his “privacy” wishes.

The image shattered when the woman dragged her luggage up the porch steps, paused before him, offered him a bright cheerful smile that lifted her lips and sparkled in her eyes, and blurted, “Hi. I’m Kate Leever. I hope you got my letter. The mail was slow, and you kept forgetting to send me your phone number, so I thought I’d come visit personally and talk to you about all the publicity possibilities that are opening up for us. I know you’re not really interested in partaking of any of them, but I feel sure once I explain the benefits you’ll reconsider.”

Lucern stared at her wide, smiling lips for one mesmerized moment, then he gave himself a shake. Reconsider? Was that what she wanted? Well, that was easy enough. He reconsidered. It was a quick task. “No.” He closed the door.

Kate, being a “go-getter” at her publishing house, with aspirations of rising higher in the ranks of the company, was determined to have her newly assigned, wildly successful author out in public, obliging mainstream media. Accomplishing this, would guarantee her success to being promoted, and Lucern’s resounding “NO’s” would not deter her.

By chance, Kate winds up spending a few days at Lucern’s (much to his distress), and even manages to get invited to a family wedding by Lucern’s mother (of course, as Lucern’s date).

As they get to know each other, they sense a mutual attraction, and Lucern finally agrees to ONE promotional event (which he assumes is a magazine interview with the Romantic Times Magazine). What he doesn’t realize that he actually accepted to do, was to attend the week long Romantic Times Convention (which as any of you who have been to one, know – it is party, after party, signings, pictures, public speaking panels, meet and greets and MORE parties!)

Turning to his brother, Bastien asked, “So what exactly is the problem, Luc? I thought you were willing to trade an interview with the Romantic Weekly magazine to get rid of Kate. What’s happened to change that?”

“Romantic Times,” Lucern corrected shortly. “And it isn’t a bloody interview-that’s what changed it. It’s a damned conference.”

“A conference?” Bastien glanced at his mother suspiciously. “Did you know this?”

Marguerite Argeneau shrugged mildly, which was as close as she would come to a concession. “I don’t see the problem. It’s just a couple days in a hotel with some readers.”

Annoyed by the trickery but being a man of his word, he joins Kate (and to his agitation, her colleague, Chris) at the event;

“This is Chris?” Lucern asked with dismay.

“You never said he was a man. Make him leave.”

and then proceeded to grill Chris (the banter in this section is hilarious, although, Lucern, clearly is not amused).

“Why are you here?” he asked the male editor.

Chris grinned “I’m supposed to keep you safe. When Kate can’t be around. Like tonight.”

Chris pursed his lips and considered. Then he grinned. “You’ve never been to a Romantic Times convention, have you Luc?”

Luc finds himself catapulted into a public world of which he had never taken part. To make matters worse, his shipment of blood was diverted, and he is starving, extra cantankerous, and the humans are beginning to look like steak (especially the lovely Kathryn Falk – yup – lots of great cameos in this story!)

While there was a scene of danger halfway through the novel, the clever writing delighted us with the numerous hilarious antics of a man exhibiting extreme displeasure at having his “personal space” invaded. Vampire “accidents” that he’d try to cover up and his priceless reactions to the public (especially the funny scene under a table) will have you laughing out loud. The moments of closeness between this mismatched couple will tug at your heart and you’ll be cheering for the twosome all the way till the end. 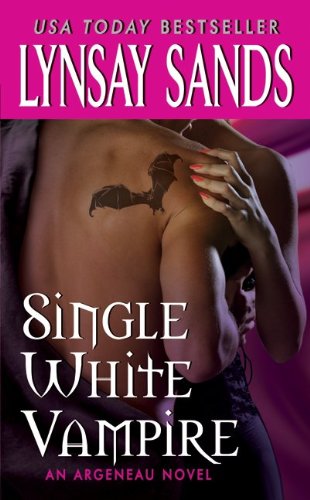 You would be correct this was the first published book and despite the authors website saying the books were published out of order I read them in the order they were published not knowing there was any other way because I started this series in 2003 when this book was originally published. so to me the order really should be single white vampire, Love bites, tall, dark & hungry then A quick bite. When read like this you don’t feel you’ve missed something or that your getting information backwards so I’m not sure what Lynsay sands means by they were published out of order. I would put a list of publication date releases and the author way and warn people to read the way they want bc I agree with you this book reads as the first. If it really was meant to be number three per the author it certainly doesn’t read that way and as I said I felt reading as published I didn’t miss anything and I think if I were to go the order she says I would feel like I’m regressing not progressing the only thing you have in this is a wedding that if I remember correctly you do get the couples story after and since it’s been a while this may be one of the first two the author is trying to say is the correct order but really to me it doesn’t matter if you have a couple getting married and then you read how they got to the point of getting married over reading their story then finding out about their wedding later. Like you said this book seems to introduce them and why would you be introducing your family of characters in book three as if you didn’t already introduced them in book one or even two?

So I found something the author said about the books…

Here it is. I know it’s been a long wait, and I apologize for that, but the next story in the Argeneau series is finally on its way. This is Lissianna and Greg’s story. It should have been the first story in the series, and would have been if I’d had my way, but I don’t always get my way. Who does? But…better late than never, I suppose. I hope you enjoy Greg and Lissianna’s story.

Makes me wonder if all four were written together and the publisher just picked one but really I don’t care if they were or not because it also makes it sound as if it wasn’t written and now it is. Either way like I said before it doesn’t matter that lissianna is already married and that etienne is getting married in this one it still feels like the first and your just lucky to get the stories of the brother and sister meeting the ones they marry almost like your reading lucerns books that he wrote and you wouldn’t know he wrote them if you didn’t read his story first. I liked reading them as published and don’t know if it really matters how the author meant them to be unlike some series where you must read in order or you’ll be completely confused.