Dragon Bound (A Novel of the Elder Races)
Suggested frequently as a must-read, I was excited to get started. Since it features a super dominant alpha male with a few jealousy and control issues, it was sure to strike a nerve, and I was certainly in the mood to be emotionally nervous 😉 While I enjoyed it enough to finish it swiftly, it didn’t overwhelm me. Perhaps I’ve “been there, done that” too many times with this genre? Could it be that I read this book with different eyes than those who loved it?

True. This hero was sexy, he was possessive, he gave me a few chills, and mostly, I did connect. There were a few surprises, and two were exceptionally beautiful (a couple of reveals, concerning the heroine – my favorite was actually the second surprise). But overall, nothing I haven’t read before. Power struggles for control, paranormals of all kinds battling for supremacy. A half human female who doesn’t quite fit in, yet is being hunted and needs to be protected, and the one most dangerous to her, quickly becomes her protector. A few kidnappings, a few magical revelations, and some eventual camaraderie (which I always love in a book). But again, while it was all there, in principle… the intensity was lacking. There was no driving need in me to live it. It held me, but never put me over the edge.

Dragos (a dragon shifter and probably the oldest being on the planet), pretty much controls New York. Wealthy beyond compare, his business empire is not one to be reckoned with. He has everything he has ever needed, even a hidden lair of treasures from centuries of living, finding, taking. It’s all his, and he guards it with ferocity. Until one day, a thief steals one teeny tiny thing from him. Something, that she hopes, would not mean anything to him. She breaches his lair (manages to get through all of his safeguards) and steals a penny. In fact, she feels so bad about it, that she leaves him a note, apologizing, and leaves him a penny to replace it.

The theft was a violation of privacy. It was an unbelievable act of impudence and disrespect. Not only that, it was – baffling. He was murderous, incandescent with fury. He was older than sin and could not remember when he has last been in such a rage.

He looked at the paper again.

I’m sorry I had to take your penny. Here’s another to replace it.

Yep, that’s what it said.

One corner of his mouth twitched. He gave himself a deep shock when he burst in to an explosive guffaw.

Why go through all of that hassle? Pia is a half human/half shifter (that has never really come into her shifting abilities). She has a few strange powers, and despite all of her mothers warnings to keep what she is an absolute secret, she confided in the wrong person. Her human boyfriend. Stupid love! It makes you do the craziest things! And as her bad luck would have it, her gambling, loser of a boyfriend sees financial opportunity in her.

“I bet my associates that I could get them anything from anywhere,” Keith sneered. And they suggested something from Cuelebre”

He tells his “associates” (btw: he owes them a lot of money) a little bit about her, and they appear to give him an “out” to his dire situation. Oh yeah? If she can do what you say she can, have her steal from the wealthiest most dangerous being on earth (Dragos otherwise known as Cuelebre), and they might consider him in a whole new light (at least, that’s what he thinks he’ll gain from it).

If she doesn’t cooperate? He will expose her fully (and his thugs will deal with her). If she does cooperate, she might get him out of her hair, but now she’ll have a whole new set of troubles to contend with. A revered (and feared) Dragon.

She knew what – who – had made that unholy sound and why. The knowledge made her guts go watery.

If she were in a race for her life, that roar was the starter pistol. If God were the referee, He had just shouted Go.

As expected, the most dangerous being on earth is on her tail and she’s on the run for her life, however he catches up with her (and it doesn’t take him long).

“So is that your long scaly reptilian tail, or are you just happy to see me?”

No, she did not just say that.

Did she? She cringed in mortification, screwed her eyes shut and waited to be splattered all over the beach.

Nothing happened, good or bad. Yet. Maybe if she kept her eyes closed it wouldn’t.

She whispered through shaking lips. “I didn’t mean to say that. Um, pay no attention to the lunatic inhabiting this body.”

As silence continued she opened one cautious eye. He studied her, lava gaze alert with interest. “Are you possessed?” he asked.

She had to clear her throat twice before she could answer. “You would think so, wouldn’t you, with all the dumbass moves I’ve made over the last couple of months….”

Yet, he can’t bring himself to destroy or punish her. In fact, he feels a deep need to protect her and keep her. He’ll figure out what to do with her later, for now he’s happy enough to know she’s his. HIS? Yup. He decided. HIS.

“That’s insane,” she whispered. “I have no idea what that means. I don’t belong to you or anyone else.”

“Yes, you do,” he told her. His thumb stroked her lips. “You are mine and I will keep you. I will not hurt you and I will protect you. And you’re beginning to trust me. All of that is a good thing.”

“I am not a piece of property, damn it!”

“But you’re in my possession.”

She enunciated, “I think you are a lunatic.”

“Since you are too, that works well enough.” His mouth curled into a smile.

Of course, being a modern young woman of the world, she doesn’t see it that way, and plans to escape his clutches. However, it doesn’t take long for her to begin connecting with him. His power, strength and intelligence captivate her, and she can’t deny how attracted she is to him. Gorgeous, and intense, her heart flutters every time he gets nears her.

And the two of ’em together means big trouble! Everyone is after them, and one villain in particular would like to take his place in the alpha social structure. She is now a prime target, his weakness, the one thing everyone is out to steal from him. And wait until they find out what she really is.

Once at risk simply because she belongs to him, but in reality, if her truth came to light, those coveting power might be after her for a whole other reason.

All that, and a good healthy dose of resisting love, to make it extra interesting. Of course, those were my favorite parts. The more she resisted, the hotter he was 😉 He certainly was a sigh-inducer. Romantic, but not. I dunno, just… *sigh* 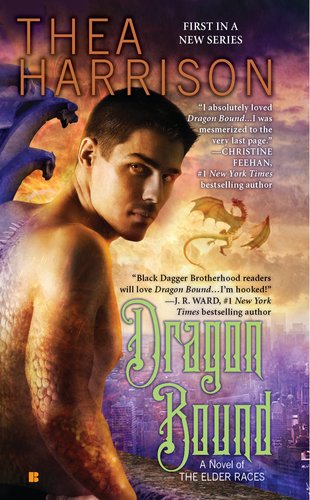 I really enjoyed this book! There was just enough snark to make it a little bit different from other books with similar themes. The audiobook is very good. The narrator does a great job with Pia and an OK job with Dragos. Still an enjoyable listen and a great read.

I absolutely loved this book. I have not read many books with dragon shifters and I enjoyed it very much. I loved the dynamic between Pia and Dragos. I also like the build up of some other stories and characters yet to come. This was a great start to a new series.