Forever Freed
This was a very sweet “vampire falls for human” book that had me lulled into a nice comfortable, somewhat long reading weekend. I can honestly say I enjoyed it VERY much, all the way through. I was never bored. It didn’t have the typical vampire “dark-alley” evil battles. There wasn’t even a need to going into “vampire hiding with the woman he needs to protect” in this one, like the typical paranormal books do lately.

Not to say that there weren’t a few moments of danger, or that vampire politics didn’t come into play at certain points. But this one wasn’t entirely focused on two people falling in love in the span of three days while on the run because of a power struggle. This one was about two people falling in love over the course of months, dating, getting to know one another, all with that underlying current of “but what will happen when she finds out about me….”

A slow, believable progression. Gentle, passionate, and so very sweet. Many sigh-inducing moments, and not just in regards to passion, but in connection.

To say this one was refreshing is an understatement. However, I will add that as much as I liked this book, and I do highly recommend it, I didn’t feel any serious urgency to finish it immediately, at all costs. I was able to put it down, but always happy to pick it back up and continue. Nothing too surprising, or excitingly new, but still so very good.

So this is what it’s about:

Lucien (okay, yes his name is vampire-typical but I love it) is a vampire. He’s a little over a hundred years old, and has not had a mate since his human wife and child were murdered by his “maker” (at the same time as he was “made”). Heartbroken, devastated and blaming himself for not being able to protect them, he has lived his life mostly in solitary. While he does have a “vampire family” (the ones that found him and helped him through his transition), guilt has kept him from feeling happiness.

He feeds on evil humans which always leads to their death. An empath, he can sense all emotions, and knows the difference between the good and the bad ones. Figures, if he has to feed and kill, it might as well be on the bad guys. The thing is, years of feeding on evil means years of struggling with their horrible emotions. So he decides to try bagged blood.

This new source promised freedom from my ancient dependency on the weak blood of animals and the punishing blood of evildoers. Imagining what that freedom could mean for me, I would my way through the hospital corridors toward a side exit.

And gasped as I walked into a haze of pure bliss.

On his way to the hospital (he’s got an “inside” connection there), he feels an incredible sense of happiness and calmness. It permeates his soul and he finally feels relief. He realizes he is picking up on these feelings of joy, from a med student. A very pretty female. And he approaches her with the intent of being in her “essence”, living in her bright light for just a few moments longer. They chat, laugh, and say their goodbyes. Those wonderful feelings leave him as he walks away, but he makes a horrible decision on what he needs to do, to continue feeling this way.

And then an unbidden thought entered my brain: If her emotions felt this good, what would it be like to consume her blood.

Ahhhh… a monster after all.

He will have her. All of her, including drinking her in, absorbing her completely, which he grievously realizes will lead to her absolute demise. But he can’t help himself. he has never craved blood like he craves hers.

I simply had to have her, had to have that one fleeting feeling of light in the darkness, that one richly sweet moment free from pain and grief.

In that instant, I was so far gone it never occurred to me that my efforts to avoid the blood of bad humans led me to plan to kill a good one.

And so he moves next door to her house. Watches her from a far, spies on her every night. Intends to eventually lull her into his home, where he will take her completely (or be invited into hers). Until he meets a little girl from the neighborhood. An adorable six year old that sees him. Actually sees him without the fear and apprehension that normally floods a human’s instincts when near a vampire. She has no fear of him at all. She visits him and chatters with him relentlessly. He bonds with her, and decides he will protect this little girl with his life, for as long as she lives (and he has a few opportunities to do just that with some near accidents).

And the way she looked at me, really looked at me. That’s why I’d saved her. It made no sense for me to do so, really. As a general rule, I didn’t get involved with humans. But if she died, the one human who saw me, who made me feel like I existed in the world, would be gone. My gut tightened. I couldn’t fathom the meaning of my reaction, nor did I fully understand the protective feelings I was developing for the unusual child.

I just knew, if I could help it, I wouldn’t allow anything or anyone to hurt the beautiful little girl with the seeing eyes.

Ahhhhh… not a monster after all.

But something puts a serious kink in his plans. A realization.

The two humans who’d filled my thoughts and senses over the past weeks stood before me… together? The woman I planned to kill. The child I vowed to protect. Together.

The little girl is her daughter!! The woman he planned to consume because of the wonderful feelings he has when he’s around her, and her very daughter that he already feels a fierce need to protect. Oh what is a vampire to do? How much of a monster is he, really?

And in his indecision blossoms a wonderfully slow story of friendship, infatuation, love, (and yes there are some very steamy moments), family moments. And danger. Definitely some of that. A vampire can’t just live in peace, after all. He is part of a larger picture, and while these stories insist that not all vampires are evil, many of them are.

Oh of course, let’s not forget my favorite subject in these books. The human who suddenly becomes aware of the monsters that surround her. Hee hee. Funny how in these books, the woman never says “Oh I always wanted a vampire boyfriend! YAY me!”

In today’s “Twilight” reality though, I have a feeling these “monsters” would be mighty surprised when the human woman in his life would do a *happy dance* at the news. I mean… if they existed, of course 😉 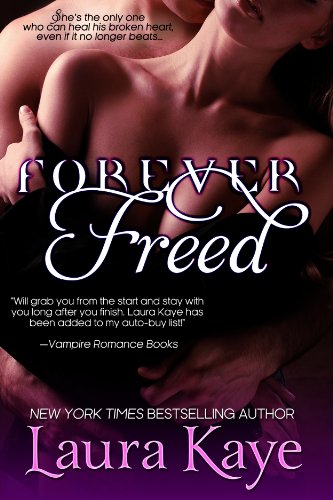 Hi Maryse..
I am looking at the model on the cover and he is the very same one as on Claire Delacroix’s “The Rogue”…. pretty interesting… now I just have to check out this book… 🙂

Thank you so much for reading and reviewing my book!

Just finished the book. I liked the break from must protect her or she dies, or when the female fights her love/desire for the male. It was, as you said, a book I could put down for awhile and get something done and go back to it with just as much enjoyment. Thanks for the recommendation.