Tangled Web
Rock stars!!! I read this one back in July, when I first found all of these undiscovered “rock star” books out there on Amazon and this was fun enough. If I can remember correctly, I got “into” it, pretty much immediately. I do know it provided for a good enough angsty ride, and had a lot of “flashbacks” that helped build the issue that was troubling the characters today.

I thought, okay, this is good, not flipping me out or anything, but I like it enough that I’m happy to see how this turns out. And then BAM! Yup, this was another that went and smacked me hard! It hit me with a shocking part that I totally didn’t see coming. I was all…  “UGH!!!” over that part, but I have to confess. It’s because of the crazy unexpected *moment* that I decided I truly enjoyed the book.

You know those kinds of books… where they’re just “okay” or “pretty good” but they had that one moment that will forever be burned in your memory, and that very thing just suddenly puts it up there in the “gotta tell ya about this one part…” category? Well this was one of those for me.

I’m bringing it up now, because I found an old discussion I had with a friend about it. And then I realized, I hadn’t even reviewed it yet, and for that “part” alone, it was definitely worth mentioning. It just… wasn’t expected. And since this conversation pretty much captured me right in the middle of reading it, I thought, yup… this is appropriate. My reaction to that certain… moment. It’s all there. But, of course, I did edit out the spoiler-stuff. No worries. You get my shock and reaction, but you don’t get the actual reason behind it 😉

me: oh yesterday I read a short rock star story. Good, enjoyable, easy read, right? and then OMG something happened that my jaw dropped on which made the book AWESOME just for that one scene alone!

Of course he’s got tons of girls on him all the time, and he’s taking full advantage of his new rock star status. She’s silently hurting, but continues to hang with him and the band, support him and all that. Then, she actually starts dating someone else… and some of the typical high school drama ensues… but THIS isn’t a high school book…

The band moves on gets famous, and they keep in touch (throughout the years). They don’t see each other much, as adults, but they don’t completely let go of their friendship either.

They are so close that even during some darker moments in his rock star career, she’s there for him. There are dark moments in this one, not depressingly dark, but the book certainly explores the usual rock star struggles. But she never tells him she loves him and has loved him for so long. Ever. So she moves on, gets engaged lives a boring life. She’s not in love but figures it’s time to get on with her own life and expectations.
He comes back one week, and throws a real monkey wrench in her easygoing life. First… elation… and then they have a serious misunderstanding. But it doesn’t end there.

Nope… it’s a whole lot more than what I’ve described in this conversation. It was a shorter book, but had enough description, emotional reflection, contemplation and actual “moments” that brought it to life.

me:  YUP!!!! That was such a perfect scene – surprised me so much that it made me decide I really liked the book!! I mean, the book was good but you know – “regular” good… ‘cept for that part. Now I’m not saying that I AGREE, just that it gave me a good *jolt*.

me:  heheheheh! See it doesn’t always have to be just love, flowers and butterflies for me, what it has to be is emotional in some way and that one freaked me out at that point. I mean the way that was written is WAY better than how I told you. That part really – I didn’t see it coming. Right then and there, I was all NO!!! WAY! UGH!!! and then, I squee’d with glee! I love the torture!!

And honestly, if only the book took it’s time during the “smack me hard” part, instead of ending so quickly soon after, this would have been a great find. Does that mean it doesn’t have a HEA? I can’t tell you. Maybe, maybe not… maybe sorta?

Just that… it was worth it. A good quick read between books. It gave me a touch of that rock star excitement (back stage anxiety and all that) and if I could ask for one thing, it would be that the book would have been longer, allowing us to “indulge” in that part, a bit more. I most certainly would have enjoyed a longer, more in-depth ending. Would have been great… ah well. Good enough! 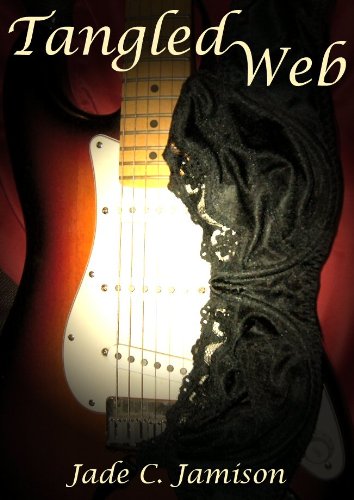 Thank you for your kind comments! I discovered your blog several months ago, and I read a lot of your reviews when I fill up my own reading list, so it was a pleasant surprise to find you reviewed Tangled Web and liked it. I have to admit I’m curious which scene you’re talking about (boy, do I feel dumb!). But I wanted to thank you again. I’ve had some mixed reviews of this book, so it’s nice to know there are a few people who liked it. Take care, and keep reading (and writing)!

I’m so happy you found the review 🙂 LOL on the wondering about what “scene” I’m referring to… hrmmm… how to say it without spoiling it? Okay, you know… the “backstage scene” when she won the concert tickets? What he said? Yah… THAT.

Are you planning on releasing any more like it?

Ah…got it. I had a lot of fun writing it, and I’m so thrilled you had a “squee” moment from it!!! Sorry it wasn’t as long and satisfying as you would have liked. Sometimes I feel like I drag my endings out (so I guess I know now I don’t always!).

I write a lot about rock music in general (you know, in the background), but the closest thing I have to Tangled Web is going to be a later book in the Nicki Sosebee series that I haven’t written yet. Nicki has her crush, best friend Sean (a biker type), and her boyfriend Jesse, both tattooed and on the wild side, but (without giving too much away) a few books from now, she *will* be with a guy from a rock band, because that’s such a fun theme. I’d love to lend you my Kindle copy of Got the Life to see what you think of the first Nicki book. But if you don’t think it would be your cup of tea, no worries.

One last thing—I plan to add a front page to Tangled Web featuring some good reviews. Would you mind if I quote you there?

Thanks again! I love reading your reviews, and it was nice to see my book up there with some of the “greats”!

Jade! No problem at all with using a quote. How fun! And I’d love to take a look at your Nicki series. I had no idea you had more, and bad-boys are my current “thing”. Lend away 🙂 Yay ME!!

I got your email and wanted you to know you have a surprise in your inbox!

You are so welcome. I hope you like them!