It’s book news round-up time, and I have plenty to report on. A few earlybird book releases today (like that one there to the left that absolutely HAS ME). Eeeeeeep psych-thriller stalker alert. Er… the guy in the book. Not me. 😉 *snort*

Here’s a little of my own news, to start us off:

Calia Read just released a PSYCH THRILLER just for me!!!! That one up there to the left. YAY!!! Er… no. Well, not just for me, but I like to pretend. 😉 Figure Eight IS LIVE!! AND OH BOY BLURB-JOLT STALKER ALERT!!!!!! OMG this blurb (the whole thing!!), but especially the last part. “But there’s no one that can compare to me. You seem to forget that I’m your figure 8. Your infinity. You try to run, but I will always find you.” P.S. It’s even super-bargain priced right now.

Missy Johnson‘s latest (Don’t Hold Back (Love Hurts Book 4) <— is LIVE and it’s making me wanna cry from the blurb alone (and it CAN be read as a standalone). She’s looking for a partner to travel with for 2 months (all expenses paid)… “I’m Erin and this isn’t your usual Craigslist Ad. I’m twenty-four, and full disclosure, I’m dying. But I don’t want your pity. What I want is your help. I’m not looking for a nanny, or for someone to hold my hand. I want a friend, a confidante, a partner in crime...”

Lara Adrian just released a Midnight Breed novella!! Midnight Unbound: A Midnight Breed Novella (The Midnight Breed Series) (I was crazy for this series back when I was strictly paranormal). 😉 “A lethal Breed warrior is called upon by his brethren in the Order to bodyguard a beautiful young widow he’s craved from afar...”

“I woke up to some surprising, exciting news, Chicklets! I knew it was in production but I had no idea it would get to us this fast!” 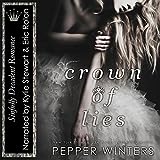 Pepper Winters has a new audiobook too!! Crown of Lies: Truth and Lies Duet, Book 1 <— JUST WENT LIVE!!! I will always consider this one of my absolute FAVORITE covers (so gorgeous!), and I hear this series is good and dark!

Alexandra Bracken‘s “Darkest Minds, The” is being made into a movie!! Tasha found us this good news and the article (Mandy Moore has been cast, and shooting for it is in Georgia, starting mid-March)!

Rebecca Donovan is raising funds for a chance at turning her “The Breathing Series” into a TV series (as I reported last week)! And tonight (7pm), there will be a book auction (here) LOADED in signed books by so many of our favorite authors, and proceeds will go to this fund. She says:

“My fabulous and gifted friends have kindly chosen to support me in raising funds to develop The Breathing Series into ten movie-length episodes, to be released on a cable/digital television network. They have all donated signed books to be auctioned for this endeavor.

My heart is full from the support, love and generosity I’ve received from my friends. I am so grateful to have such wonderful women in my life!

Together, we can make anything happen!”

Amy Harmon just announced the title and posted the blurb of her upcoming release (the sequel to her HUGE hit “The Bird and the Sword“) called The Queen and the Cure. The cover reveal will be in April (and it will release in May!!), but you’ll get a good feel for it, with this blurb!

Colleen Hoover has posted a mini “FAQ” on her upcoming TV show series for her book Confess: A Novel, so if you’ve had questions… like… “What’s Go90?” (where it will be airing), she’s got your answers! P.S. Here’s the trailer!!!

Alessandra Torre has more “Hollywood Dirt” movie-news for us, too. She’s just announced the actor that will be playing “Cole” and a little background on where they are in the production process too. In fact, it’s been featured on NBC’s Georgia news channel (where they will be filming part of the movie), here! A snippet from the article:

“Crump says they have another week of pre-production here before they begin actually shooting the film a week from today. They’ll then film for ten days in Madison, Georgia before finishing in Los Angeles.

The Augusta Film Office expects to have more than sixty percent of their crew to be made up of locals looking to help out, but there’s still time for extras who want to be a part of the film to sign up.”

K. Bromberg has a new book coming out soon entitled “The Player” (BASEBALL STAR!!) and she posted the sexy cover and blurb. Here’s a tidbit:

…when an injury threatens to end Easton’s season early, the team calls in renowned physical therapist, Doc Dalton, to oversee his recovery. Except it’s not Doc who greets Easton for his first session, but rather, his daughter, Scout…

Madeline Sheehan has officially posted an update (and blurb and cover reveal) of her upcoming book release “Undeserving (Undeniable 5)”!!! It’s Preacher and Deborah’s story! And when someone asked if it was the last book in the series she replied: “Definitely not the last, ZZs story will be book #6.” You can see the whole blurb at the link I posted, but here’s how it starts. 😉

“Warning: This isn’t a love story; it is a tragedy, a cautionary tale about the consequences of love between two people who tried to defy the rules defined for them and failed.”

And a few more that just went live (or are super-bargain priced):

So, let me settle in and tell you all about what you should read.

Figure Eight looks good and Don’t Hold Back looks marmyish (and good too)!

I can’t believe Madeline Sheehan is FINALLY releasing the next book in that series! It’s been so long!

So your mom read the Maryse and peanuts post??

You and your mom should do a road trip to RT. Pick up blog readers on the way. That would be a cool spin off.

Yeah my mom is just like us. I’m more of a prude than she is. She makes fun of me. 😉

Eek :-/ There’s no way I could read Don’t Hold Back. I nearly started to choke up just reading the mini blurb up there.

I love the book of Hollywood Dirt so It will be interesting to see how well it carries over into a film.

Garden of Goodbyes…whoa, I think I just found my March read. 😉

Hey! I didn’t know Working It was coming out so soon. Thanks!

I love that cover Amy! Keep us updated if you read it!

Did I tell you I’m just finishing up Cruel and Beautiful?

It’s you, right? That loved it so much?

Ooooh this author is sneaky!!!!! And so good. Genius, even.

Maryse I just finished an absolutely best read and I don’t think I’ve seen it on your blog. The Copper Smith Farm House by Devney Perry. Couldn’t put it down!!! I’m actually pouting because I wish I could read it all over again for the first time!!! Anticipating a snowstorm here in the panhandle of WV so maybe snuggled in with another great book!!

Hello? Ms. Sheehan… um… could you wrap up the Un- series & get back to Holy Trinity FOR CRYING OUT LOUD!

There should be a rule about “trinitys” – must complete within 36 months or less. My wait is becoming Gabaldonish.

I’m almost done with Weaving Man. Hands down one of the best books I’ve ever read & best male characters ever. Complicated, intelligent, cunning, tender, loyal, ruthless when he needs to be. Stunning debut from this author.

I’ve been saviring it for a while now. Don’t want it to end. I’ve got 10% left & already mourning leaving their world.!

OMG Maryse…I didn’t know you were reading it!!!!

I figured out what was going on in the first chapter so my heart was sloooooooowly broken over the duration of the book due to knowing “that” as opposed to a sudden and jarring break. And let me tell ya, the perfection that was him in the past made that slow break excruciating for me. And for your listening pleasure, a song that ALWAYS brings the past part of that story to mind…
https://m.youtube.com/watch?v=1GU8Ekk8Pbs

Right there with ya MichelleS…no more Un- books for crying out loud!! You can’t kick the sh!t out of my heart like she did at the end of the second Trinity book and book 2.5 and then just leave me to wallow in my misery, dammit!

I’m going to have to re-read the whole freaking 2.5 books just to remember where we left off! Ugh. Just like Monning & the Fever series. You’re losing me, authors!