HAPPY MEMORIAL DAY, MY FRIENDS!!!! Today’s earlybird list is loaded in favorite-author awesomeness, including a new one from Kristen Proby, Kelly Elliott, Kim Karr, K.M. Golland, and more!! YAY US!!

Guess what I’m doing on this wonderful Memorial Day? I’m LISTENING to an audiobook!!!! The Last Girl: The Dominion Trilogy, Book 1 <— *squeeeeee* Post apocalyptic, despair sounding. An epidemic has made woman very rare, and baby girls are essentially not being born anymore. YIKES!!! MINE!! 😀 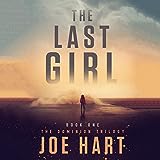 There’s been notice that some of the Whispersync audiobooks have gone up in price (even though still “sale-priced” considering the usual price of an audiobook), but a definite price increase. Not sure if it’s for good or not, but just in case, I went ahead and one-clicked a bunch that were still super-bargain-priced just in case they go up, too. And this was one of them, and I’ve been dying to read this, so listening is the next best thing! 🙂 Or maybe, in time, THE best thing. This is my first official audiobook listen, in “fiction” format. ➔ Find out which of your Kindle books are available as audiobooks at a BARGAIN-PRICE!

P.S. In case you missed it yesterday, I five-star LOVED “Sustained” and here’s my review: Book Review – Sustained by Emma Chase

Nay: MichelleS & Tessa (and anyone else who’s been waiting for it)–A Strange Hymn by Laura Thalassa was released on Friday!

Tessa: I’m rereading the Bargainer just for fun first. I’ve been reading her Unearthly series and things are mentioned there that apply.

For those going on a road trip soon, or maybe you’ve got some projects that require both hands this weekend but still allows you to “listen”… check out the free audible trial + 2 free audiobooks deal —>

Prayers for all those who gave their lives!

Those are some great sounding books!

What? I’m first again! Is everyone sick today? And Happy Memorial Day!

I have 3 pre orders coming in tomorrow or after 9 tonight.

Nay informed us yesterday that Rhapsodic by Laura Thasala was released. This is the next book of The Bargainer. I’m rereading the Bargainer just for fun first. I’ve been reading her Unearthly series and things are mentioned there that apply.

Alright, The Dirty Version looks good. The Sexy Jerk, maybe. It seems odd to me that 2 unrelated people are needed to babysit one 3 year old, no matter how wild.

Would it be wrong to stay up all night to read White Hot? I have to work tomorrow!!! I’ve been waiting 2 years for this book and have been debating the whole time whether I’d be more excited for the release or for my child’s HS graduation. No, I’m not ashamed…..

White Hot is one of my pre orders. I debated re reading the first but nope, just going to jump in.

Hi all!
It’s a Ruckus kind of day!

I’m finishing up up American Hellhound today. I’ve been trying to drag it out as long as I can. I’m so in love with Ghost and Maggie’s story, I don’t want it to end.

And Grey made us a spotify playlist on the other thread. How fun is that, of our summer music. Just about to hit play. 🙂

I know it’s a shock, but I don’t have White Hot on pre-order. I’ll be reading Burn for Me first, and buying it after I’m done with that. I loved the first book, but two years later, I only remember bits and pieces.

Grey, I’m loving it. But did you mean to add the whole Bell album? I’m not complaining cause it is really good listening. 😉

But you read so fast you could probably have them both read in a day.

For those of you who like the slow burn, Shacking Up will be for you. I really liked it!

*looks at the stack of library books next to her*

Um… I can wait a few days. I’m reading Rhapsodic after the Bargainer. There are so many details I forgot. I also need to re-read Daughter of Smoke and Bone. Forgot that one too. :/

Maybe shouldn’t of in public. Trying not to cry to Shania freaking Twain, lol.

But it was interesting one of the hosts asked his 5 year old son what song makes him think of mom when he hears it.
I’m curious what song the moms here think their children will associate with them?

Fixed it, bev! Thank you, not sure what happened there??

Happy Memorial Day everyone!!! 😀 We did a walk in town which had the pictures of all fallen service members from the nearby bases posted along the walk…very solemn yet we loved seeing them all acknowledged that way.

Now what to read…a 2013 read, a bev’s challenge read, or a pick-for-me read? It’s almost the end of May and I didn’t read the last two for this month. Eep!!

Sharon, that would NEVER be considered wrong around here. 😉

I’ve been listening all day to “The Last Girl” audiobook. I kind of enjoy listening… I’ve been able to multitask AND follow the story, but I’m not 100% sure if I like this book, or not (and if I don’t like it, or “love” it, is it because of the narrator… or not?).

Or if the fact that I’m not reading it with my own eyes and my usual reading attention span, might mean that I’m not “IN” it, like I normally would be via reading. It’s like using my eyes means I’m deeply connected, than if I’m only using my ears.

If that makes any sense…?

Amy, have your husband pick.

Totally makes sense to me Maryse. I think that’s why I can’t do audio books…..I just don’t absorb as much.

Only time will tell and listening to the audio version of Aristotle and Dante Discover the Secrets of the Universe.
Its for sience.

I Believe in a Thing Called Love Just hot my kindle. 2 more to go.