Cover reveal?? Didn’t we already read this one? Yep!! (check out my original book review, here). But so many loved it like we did, and it looks like Atria/Simon & Schuster signed it. As. A. SERIES! YAY!!!

A huge congratulations to K.A. Tucker! Her absolutely amazing book, Ten Tiny Breaths, caught the attention of Atria Books, an imprint of Simon & Schuster. They loved it as much as we did and have picked up TEN TINY BREATHS plus 3 more books in the series! That’s right! K.A. Tucker has signed a 4-book deal with Atria. The eBook of TEN TINY BREATHS is being released today, with a paperback edition coming in October. Here’s the brand new cover for you today!

And…the first sequel to TEN TINY BREATHS will be released by Atria this summer. One Tiny Lie tells the story of Kacey’s sister, Livie, during her first year of college. If you haven’t picked up TEN TINY BREATHS, check out the summary below and grab your copy today!

Four years ago Kacey Cleary’s life imploded when her car was hit by a drunk driver, killing her parents, boyfriend and best friend. Still haunted by memories of being trapped inside, holding her boyfriend’s lifeless hand and listening to her mother take her last breath, Kacey wants to leave her past behind. Armed with two bus tickets, twenty year old Kacey and her fifteen year old sister Livie escape Grand Rapids, Michigan to start over in Miami. Struggling to make ends meet, Kacey needs to figure out how to get by. But Kacey’s not worried. She can handle anything—anything but her mysterious neighbor in apartment 1D.

Trent Emerson has smoldering blue eyes, deep dimples, and perfectly skates that irresistible line between nice guy and bad boy. Hardened by her tragic past, Kacey is determined to keep everyone at a distance, but their mutual attraction is undeniable and Trent is determined to find a way into Kacey’s guarded heart—even if it means that an explosive secret could shatter both their worlds.

Kacey Cleary’s whole life imploded four years ago in a drunk-driving accident. Now she’s working hard to bury the pieces left behind—all but one. Her little sister, Livie. Kacey can swallow the constant disapproval from her born-again aunt Darla over her self-destructive lifestyle; she can stop herself from going kick-boxer crazy on Uncle Raymond when he loses the girls’ college funds at a blackjack table. She just needs to keep it together until Livie is no longer a minor, and then they can get the hell out of Grand Rapids, Michigan.

But when Uncle Raymond slides into bed next to Livie one night, Kacey decides it’s time to run. Armed with two bus tickets and dreams of living near the coast, Kacey and Livie start their new lives in a Miami apartment complex, complete with a grumpy landlord, a pervert upstairs, and a neighbor with a stage name perfectly matched to her chosen “profession.” But Kacey’s not worried. She can handle all of them. What she can’t handle is Trent Emerson in apartment 1D.

Kacey doesn’t want to feel. She doesn’t. It’s safer that way. For everyone. But sexy Trent finds a way into her numb heart, reigniting her ability to love again. She starts to believe that maybe she can leave the past where it belongs and start over. Maybe she’s not beyond repair.

But Kacey isn’t the only one who’s broken. Seemingly perfect Trent has an unforgiveable past of his own; one that, when discovered, will shatter Kacey’s newly constructed life and send her back into suffocating darkness. 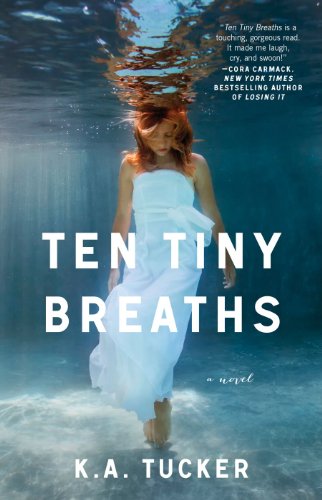 I read this book this weekend. It was on my TBR list thanks to you! I loved it what a wonderful read! Love the new cover and i’m stoked there will be more! YEA for a series! 🙂

Wait, I’m confused. This wasn’t in print before because I definitely ordered it over the weekend from Amazon?

loved this book! I am really happy for K.A. Tucker!