While I finish up a wonderfully steamy UFC Fighter book (50% into Kele Moon’s “Star-Crossed – Battered Hearts 2″ which is her latest release and will be available on Amazon within the next week or so), I gathered us some more news!!

Lots of great news (author and book wise!) including some snippets from Travis and Gideon, and some dates and titles for highly anticipated upcoming releases!! Like which?  Lara Adrian’s next one, Kim Harrison’s, Chloe Neill’s, oh and!!!! The next Vlad book in Jeaniene Frost’s “Night Prince” upcoming releases! What!!?? Already!?? I know right?! That’s what I said, but here they all are, listed in order of release date and a ton of goodies that I didn’t even know about!

“TITLE CHANGE! – the title of “Deeper into You” has been changed to REFLECTED IN YOU. (same book, same cover, different title!)
WHY THE TITLE CHANGE: The title was changed because some of the merchants thought it was too suggestive and they didn’t want to put it out and shock customers with it. Because the publisher wants the book to be available everywhere (like BARED is), they changed the title so we could keep the distribution widespread.
PRE-ORDERS: No worries! The cover and title will update on all the e-tailer websites soon and all pre-orders will be preserved. You’ll still get the right book AND you’ll still get it in the order you were in before. (Did you know that? At midnight on the day of release, when the books start being emailed to your e-reader or mailed via snail mail, they go out in a first come, first served order?)

“A little snippet of REFLECTED IN YOU. (Again, this is unofficial and may change or be deleted before printing):”
“I am lucky.” Gideon brushed loose strands of my hair away from my temples, his own luxuriant hair falling around that perfect face. “And maybe, if I’m really lucky, you’ll feel better tomorrow and like me again.”
Ah, God. My heart ached in my chest. “I like you now, Gideon. I just don’t like you keeping secrets. It’s going to break us up.”
“Don’t let it,” he murmured, tracing my brows with his fingertip. “Trust me.”
“You have to trust me back.”
Folding over me, he pressed his lips softly to mine. “Don’t you know, angel?” he breathed. “There’s no one I trust more.”

Latest Upcoming Book Release Finds!!
I’ve found a treasure trove of upcoming books hidden in the nooks and crannies of the internet!! News to me, and maybe news to you , too? They’ve already been added to my main “Book Releases” page, but I listed them here as a shortcut for you to see all the great upcoming release finds! 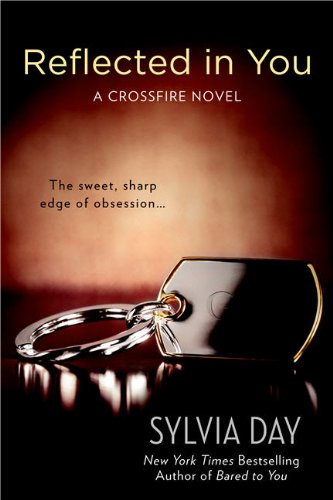 You say “another” snippet from Travis’ POV… The one you link to is the only one I’ve read. Are there other snippets? Where do I find them?

Hi Cree!! Ummm you know what? I thought I was linking to a new one, cause this one is a few weeks old. Lemme backtrack and see if it’s always only been one snippet only.

thanks, Maryse, for sharing. Can’t wait for Reflected in You. >.<

Sylvia Day posted another snippet from Reflected in You on FB last night…….. HOLY COW HOT!!! I don’t know how to share the links from my phone but I thought you guys would like to check it out… Yum! Happy hump day!

Just checked out Sylvia Day’s FB. My oh my… Christian is having a big competitor. Gideon is so hot and sweet too >.<