X
You are here: Home / Archives for molly harper

Great news! I recently received some news about one of my favorite new (well… new to me) authors! I absolutely loved the intro to her new Werewolf series (How to Flirt with a Naked Werewolf), and thrilled about her nomination. Congratulations Molly!!

LOUISVILLE, Ky. (April 5, 2011) – And One Last Thing …, a funny and charming contemporary romance by Molly Harper, has been selected as a finalist for the Romance Writers of America’s RITA awards. The title was nominated in the category of contemporary single title romance, along with books by Nora Roberts, Victoria Dahl and others. Winners will be announced in late June.

Harper received news of the nomination just as she was releasing her sixth book, The Art of Seducing a Naked Werewolf. The new book is set in and near the fictional town of Grundy, Alaska, and includes several characters from Harper’s first werewolf book, How to Flirt with a Naked Werewolf.

When a snooping outsider, researcher Nick Thatcher, comes to investigate rumors of lycanthropic shenanigans in the area, the pack’s alpha werewolf, Maggie Graham, resolves to chase him away, but instead falls head over tail for him. Romantic Times calls the book “a smart, exciting story” and has given it a four-star ranking.

In addition to And One Last Thing and the werewolf books, Harper’s titles include the successful Jane Jameson Nice Girls three-book vampire series. All of Harper’s paranormal books are published by Pocket Books; And One Last Thing is published by Gallery Books. Both are imprints of Simon & Schuster. Harper’s books are available in print, e-book and audio formats, and can be purchased through Amazon and other major book retailers. 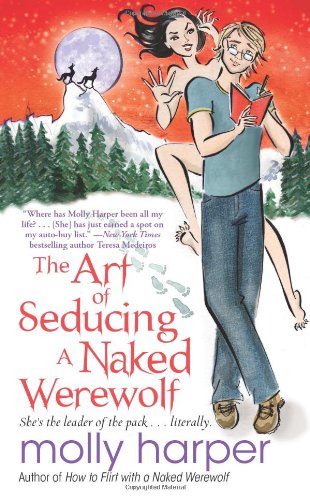 HUGE HUGE release day today! Books we’ve all been dying for, and here they are, ready to be devoured! My own personal must-reads in this list include J.R. Ward, Kerrelyn Sparks, Larissa Ione, Molly Harper (and of course Gena Showalter, but I have a lot of catching up to do on that series).

How to Flirt with a Naked Werewolf
How cute was this book!!? LOVED it. I couldn’t put it down. It was exactly what I needed and kept me entertained the entire way through. Funny, sweet, romantic, a little love triangle, lots of camaraderie, a little danger, a lot of alpha male, and just enough romantic angst to keep pulling at my heart.  After a long work weekend, it was just what I needed to wind down and get back into my routine.

Mo’ (short for…well, you’ll find out) needs a change. A do-over. Her mega-hippie parents won’t stop meddling in her life (she’s practically their polar opposite despite how she was raised), and her fiancé just broke their engagement. She’s alright with it. She realized she  wasn’t in love with him that much anyway. She needs to shake up her life. Find herself. So she heads from Mississippi to Alaska. read more

“One series that I found by accident (my wonderful husband saw it at the library and checked it out for me) is the “Nice Girls Don’t have Fangs” series by Molly Harper.  She also wrote a werewolf series that is good as well.  I laughed out loud throughout all the books. Smart, funny female accidently turned into a vampire with the same family drama and relationship issues we all have.”

As per the author’s website describing the series: read more