You are here: Home / My Book Reviews / Book Review – Checked by Jennifer Jamelli

Checked
<— Loved it! After reading that blurb, I knew this one would give me that reading satisfaction that I crave.

Maryse: I just GOTTA read this. I LOVE romance books about people with weird quirks, or social issues, and this one sounds like it’s gonna be fun. Or angst-hard. Either way, I one-clicked this puppy!

And boy did it deliver!

Maryse: Finished “Checked” and reeeeaaallly liked it. I’m thinking 4 stars (4-stars+), but the kind of 4-star story that I absolutely feel compelled to read the new release immediately after. Like right now. No breaks needed. I just wanna continue this story. Now.

Or… tonight, ’cause I’m working right now, but you know.

Now, the 4-star is because it wasn’t… you know… “perfect” for me in terms of excitability/unputtdownability. While I enjoyed reading it every step of the way, there was a lot of exploring her phobias (through her eyes as she lived them). Through her doctor’s attempt at explaining them to her (and how to possibly overcome them). Don’t get me wrong. I enjoyed experiencing all of that, too.

But there was a ton of everything else. A bit of UGH! No way! Then that delicious crush. Then a bunch of sweeeeeeeeet connectivity (all the while, knowing that things just might be doooooomed). One step forward, three steps back, and all that. Scenes full of OCD-eeeeep factor, (whether it be her checking for “murderers” in her closet… once. Twice. And then three times)…

To buy myself more thinking time and, well, because it’s the responsible thing to do, I check my closet one more time for murderers before applying my body lotion.

Hehe. Murderers. She’s so funny!! Even she knows it’s all a bit (okay a LOT) much. And it’s lighthearted that way, even in it’s heaviness.

But sometimes it gets seriously heavy. Like when a random “someone” touches her, or when she’s suddenly being exposed to everything that grosses her out, all at once. And then there were the “clean” scenes.

He doesn’t know that some people are clean to me. Okay to touch.

All of that hope. That “almost there”. Would it ever “get there”?

And what made me love it most, was the fact that the author allowed us to experience her, get to know her. And we were afforded the luxury of getting to know her gorgeous but sullen, sad doctor, through her eyes.

His eyes are miserable, devastated. Just like the first time in his office. But it’s much worse. Much worse. I did this.

His melancholy stare, his occasional despair and his absolute gentle sweetness tugged at my heart.

The genuine shock in his eyes forces me to tone down the hurt loathing in my own. He didn’t know. He’s not here to mortify me.

She wasn’t the only broken one.

Maryse: …her no-nonsense, young & handsome doctor will barely even look at her. Curt, and to-the-point, it’s when he asks her “Why do you spend most of your day seeing problems that do not exist?” that I just KNEW this could be a fun/tumultous ride and it was for me!

Maryse: Oh wow… loving her therapist. 50% and in his own way he’s sooooooo broken. I can feel how sad he is. Now to know why.

This one was so obviously up my alley, ’cause I’ve just got a “thing” for reading potential romance books about two people (or at least ONE) that is unusually flawed. Something that truly sets them apart from the rest of what society considers normal.

I love that potential for the drama and depth (or maybe even hilarity) of trying to overcome that specific “issue”, along with navigating the already testy waters of love. So many possibilities for surprise scenes, heartache, or heart warming realizations. So much potential for healing and growth. And often, self-sabotage. That kind of personal angst is totally my thing!

And I know we read a lot “like that” already, with so many of our past favorites. Those with that “bad family past” or “dark *thing* that happened” theme that are so familiar to so many of us. Those characters that fool everyone with their mask, their amazing acting skills, only to be revealed as the story progresses, by the ones they were trying to hide it from the most.

But THESE books (like “Checked”) are a bit different than that. Their personality quirks, or physical insecurities cannot be hidden by a simple “mask”. Whether it be my beloved reclusive introverts (or “hermits”) that have serious social phobias and are intent on never facing the world (and when they do, they are an absolute mess), to characters with severe physical scars (that are truly beautiful but won’t allow anyone close enough to discover it), to those with physical disabilities, to those that have excessive OCD or specific needs that interfere with their living a “normal” life.

I just love ’em! I love connecting to them, I love committing to them. And when it’s well written, I love becoming them.

I could sympathize with them… and I could see myself in her.  Oh not to THAT extent, mind you. *blush* I definitely don’t have OCD. Not with my very MESSY moments that I just leave like that when I’m too busy (or too into a book) to care. Not with my obnoxious TBR list that I simply cannot keep under control and just recklessly keep adding to, with abandon. Reading and bouncing from one book to another, to and fro. Definitely not OCD-ish, right? Er…have I just become “The lady doth protest too much…”? 😉

LOL! But I most certainly have my OCD-ish preferences (and occasional intense need) with beds being made nice and tight and crisp, shiny things gleaming brightly and the house smelling like sun ripened lemons, and making lists and checking them twice and well… you know the drill. I thrive in order and shiny and neat and tidy. It makes me wanna do cartwheels, in fact. And I do. Just ask my husband. 😉

But I digress. I COULD understand her need to handle her life in any way she could (and to do everything in her power to control that control).

Lori: I’m about 80% into Checked. I wanted something different and it’s pulling me out my book slump…it’s a little over the top on her OCD but you can’t help but relate and like her…

Maryse’s Book Blog: Confession… I wanted to copy her daily “clean-up” lists so I could you know… refer to them. *blush* It seems to be fairly time efficient, and… spotless. LOL!

Lori: I know right?? hahaha there’s so many things that she does that I think, hmmmm…. and then some I think eeeep…I never thought of that before, and don’t want to now

And the music that plays in her head… her personal life and situational soundtrack? I have that!!! Not all the time, but when I’m nervous, or excited… sure enough… the songs play!! IN. MY. HEAD!!! Just like her!!! GAH!!!! Oh and don’t get me started on the cooking shows…

So all that to say, YAY ME that I get to immediately start book #2 once I hit “publish” on this review. It ended in a way that… GAH! I just need to read the next one, and I’m SO relieved I don’t have to wait for it. I miss these guys and I just gotta know.

IsDonIsGood: Hmmm Checked…  I was really enjoying it and then it just ended. I wasn’t prepared for it to just end. This ‘just stopped’ feeling is hard to describe without spoilers. BUT if there is a sequel on the way, as Maryse indicated, then all is right with the world.

Not “on the way” IsDon. It’s already OUT!!! *squeeeeee* —> Checked Again (Checked Series Book 2) <— That’s how I found out about this one in the first place! Making that new release list on Monday, and something just told me I needed to look into book #1… and I’m so glad I did.

But then… that final line in the book. *shivers*

Yep. Off I go to continue my OCD-love marathon. 😉 I can hold back, no longer. 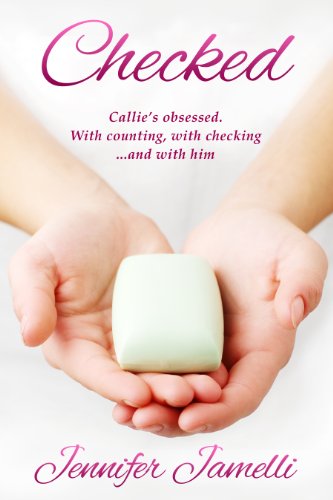 Hi Maryse, do you know when book three is being released?

I squirreled and am reading Infinity + One (which is kinda reminding me of the Edge of Never but I’m not that far into it). But now, after skimming your review, I am moving this one back up on my list). Thanks Maryse!

I should start this one next just to get that cleaning list. 😉 I seriously end up squirreling when I am cleaning house. And you like the smell of lemons, huh? Lemony Flutter by Lush for your cuticles. Freaking amazing and smells soooo good!

Infinity + One was a sweet one! It reminded me of EON, too, Jean. Drama but no real angst, at least not to me – or maybe I’m just building up a tolerance to angst? Good lord, it’s like a drug…

LOL!!! I know… I wonder about that myself. Is it that there wasn’t much angst, or is it that I need more of it, and and crazier levels now?
😉

LEMON is my favorite scent other than anything cookie-like. And lemon-cookie? The ultimate! Mmmmmm. I love the smells of deserts, and therefore the tarts are always melting in my house.

It is sweet Amy and I am liking it BUT I need more angst!! Lol! I never thought I would say I need a book that will give me pains in my stomach, but it appears that’s what I’ve become! Haha!

🙂 Thanks for reading (and reviewing)!

No release date yet for book three. I’ll post updates to my Facebook page as I have them:)

“…Recently separated and newly unemployed, Scarlett Russell is at a crossroads. With no other plan than visiting a friend in Vermont, the last thing she expects is a hunky, silver fox offering to buy her a drink.

Even less expected is when she raises that offer to “take me to bed, cowboy.” She just wants one night to forget everything gone wrong. Turns out once won’t be nearly enough...”

READER QUESTION SOLVED!! This was the question: The book about the four high school guy friends that now hate her…

LOOKIT WHAT KATHY FOUND FOR US!!!

Kathy: Mia Sheridan’s new book, Once We Were Starlight is out. It sounds so different from what she has written. I’m excited to read it.

Look forward to your thoughts Maryse.

What did you choose?

I’m not sure yet which one I’ll choose, The Perfect Marriage looks good!

I can't decide between that one or Adulting! Adulting might have actual romance in it! 😆

“…Both fierce competitors, Luna and Alec clash on national TV as harsh words and glitter fly with abandon. But as they bicker over color swatches and mood boards, they find themselves fighting something else: their growing mutual attraction.

While Luna is torn between family loyalty and her own feelings, Alec wonders if he might have been wrong about love and marriage all along…”

I have read it already-- it is so so so good!