X
You are here: Home / My Book Reviews / Book Review – Come to Me Quietly by A.L. Jackson

Come to Me Quietly: The Closer to You Series
I decided to dig back into my “Seventeen books on TBR List” and read this recent release, since this one comes highly recommended. Actually, anything from this author does, and going by this book, I can see why!

Deanna: Come To Me Quietly. When u ask what books puts u in a fog and u dream of for days later. That is this book for me. I downloaded “stay” by Rhianna because that song works so well for this book. You’ll see. 5++++++ stars. Obsessed. Cant wait until July. So good.

Mertxe: “Come to me quietly” is breathtaking, Jared will break your heart and you will love him. 5 ++ stars

Megan: I am almost done with Come to Me Quietly….WOW, it will break your heart and put it back together. 🙂

Wow. A.L. Jackson is an eloquent writer, and the detail in her characters, their lives and their interactions just… did it for me. New adult maybe, but with a mature feel. Told from both POV’s, it’s impeccable in it’s narration. Just enough to be able to visualize them as if they were real, but better yet, enough emotion and introspection to actually be able to feel them… as if they were us.

Aly has crushed on her brother’s best friend (Jared) since they were little. She used to follow them around everywhere, and he loved her as if she were his own little sister. Kept a vigilant eye on her when she was with them, made sure she didn’t get hurt, and if she did, he was the first one there to take care of her.

They adored each other… and as they became teens, her hero-worship developed into so much more. Except that something… separated him from their lives forever. Or at least what seemed like forever.

Until the day she comes home from work one evening (years later), and notices a fully tattooed (and pained looking) Jared sleeping on her couch.

My attention was drawn to his hands, where the designs dripped down over his wrists and leaked onto his fingers. The knuckles on one hand had numbers that read 1990. The knuckles on the other were marked 2006.

Sickness coiled in my stomach as I realized the significance of the statement he made.

This boy was painted in his pain.

Whoa… “painted in his pain“. Beautifully said. Deep and heartbreaking.

Living with her and her brother until he gets situated now that he’s back in their hometown. While he adamantly (even aggressively) tries to keep his distance from Aly (as per her brother’s demands and his own self-imposed punishment),

He released a bitter grunt as he leaned back, then stalked away.

… the pull between the two is undeniable. Tormenting them both, as he struggles against their emotional current.

She’d triggered memories, ones I didn’t want to remember. Memories of when I was happy and free. Memories that taunted me with what i could no longer have.

It had me emotionally connected and swooning over Jared with a big gushy heart. And the things he’d say to her…

His gaze captured mine before his fingertips traced down my cheek, swept along my jaw, and barely glanced over my lips. “You grew up on me, Aly,” he murmured, the words rough, almost in awe.

*gulp*. His jealous reactions when he’d see her with another guy? My heart would dip and the stomach-butterflies would be in full force! He couldn’t do anything about it and it was believable. But still… he’d react and I’d thrill. Exactly what I’d expect a tormented “bad-boy” with a huge chip on his shoulder (and for good reason), would do. One who keeps denying himself, and yet can’t resist. Takes… but then punishes himself (in turn punishing her in the process),  driving the angst portion of this love story.

“Hanging out with you like this has absolutely been the most selfish thing I’ve done in a long time.” A short breath filtered from his nose. “I can’t do this with you anymore…. this whole friend thing. I can feel it coming, Aly, that something bad is gonna happen and I’m going to hurt you, and I refuse to do it.”

“You’d never hurt me,” I said. This time I couldn’t keep myself from refuting his words.

Dry laughter filled my room. “You’re right… because I won’t ever let it get that far.”

And that’s what made this book different from the many “tattooed and tortured” heroes that are flooding the romance genre today. Mind you, I’m not balking at it. 😉 I love a tortured “bad-boy” hero (they’re what attracted me to the genre in the first place), and having this many to choose has been a lot of fun! But lately, my issue is that I’m looking for an authentic one. I don’t want them to simply display the “bad boy features”, but to actually live, breathe and maybe even die by them. And if they’re tortured too? I want to believe the reason behind the constant self-deprecation, shame and guilt. Instead of becoming exasperated with their constant turmoil (in turn, making me lose interest and simply disconnect), I want to understand the reasoning behind their emotional resistance and personal disconnect.

This one handled that perfectly.

Oh you bet I was curious as to why he was constantly punishing himself. And for awhile (as it kept me guessing) I worried that it was going to be more melodrama than the actual reveal was worth.

But I was wrong. Oh yes. Once the reason came to be, and I got to experience it in detail… whoa. He had every right to his own personal agony. I’m not going to say whether he deserved that kind of self-punishing exile, or not (that would be a slight spoiler), but I will say… I got him. And I don’t know that I would have been any different.

I knew inside that pure heart of hers she believed the two of us were just the same.

Maybe her soul burned so bright she couldn’t see the blackness in mine.

Ohhhhh WOW. I loved that!! Perfect.

Fantastic angsty potential love story, that had just enough of everything to keep me guessing, torturing me just right. You know I love it when it hurts, and this one stung real nice! I can’t wait for the next installment! Cliffhanger? No. But definitely more to come for these characters, and I’m thrilled! 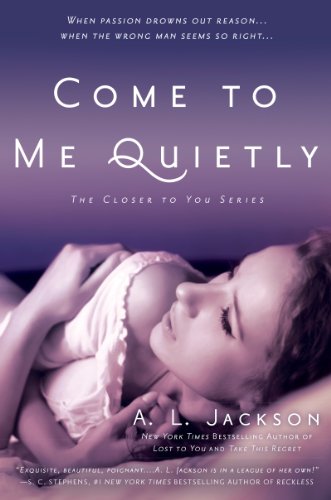 Love A.L.Jackson’s writing style- her books seem to have a special quality to them. Thank you for the great review and looking forward to reading this book.

I loved this one too. It was a slow burn through out the entire book. Can’t wait to see where it goes in the next book.

Its on my TBR list. Might go ahead & start it. I’ve been on a lucky streak with good books & I don’t want it to end. I read 5-7 books a wk so there’s bound to be some bad one’s but I jad been in a slump since Xmas. Fighting Temptation by K.C. Lynn was fantastic. Ignite by R.J. Lewis was the best book I’ve read in a long time.

I almost always love the books you love but this time I disagree with your review. I felt the “bad boy” was too self-loathing and self deprecating that after a while he was too depressing to swoon after. I was rolling my eyes at one point. The reveal of why he was sent away to juvenile hall took way too long to reveal. They way he was hating himself I thought he slaughtered his whole family and then some. This book was too melodramatic for me. Oh well, on to the next TBR.
xo

I’m a german reader and followed your blog since a period of time and I love it. Thanks for all your great recommendations.
Please excuse my english if there are any errors.

This book was an amazing trip. I think I never read a book in such a short time. I devoured it. (Do you use this word in english?) I couldn’t stop reading. Fantastic writing and thrilling story. It was refreshing to be into a book so completely.
We “book-adrenaline-junkies” 😉 (like you call us) want more of these books.

I love this review b/c I’m right there with you Maryse, everything lately feels gratuitous, with actions and behaviors not making sense based on the root cause of it. For me, the darker the better but as you said it needs to feel authentic and they need to suffer for it and grow from it. I will definitely read this!