Consumed
I’m always in the mood for a good “MMA fighter” book. Done right, I get a real thrill in the danger, develop a full-on crush on the unattainable hero and have all of my alpha-needs met. And while this wasn’t my absolute favorite, it entertained me and satisfied my need for this genre. It had all of the usual alpha male fighter bells and whistles:

So what makes it different? In this book, (there was a lot of it – 406 pages!!), the author mostly took her time with her characters (until we get to the end, of course). *sigh* As so often happens, the end seems to fly by compared to the pacing of the bulk of the book as a whole.

But overall, the reader is afforded time to indulge in the “courting” process, experience the resistance, eventual friendship, and his protection that makes him so obviously worthy of all of the love in the world.

Maryse’s Book Blog: Okay I’m reading one that I’m pretty much… loving. Hasn’t made my heart explode with some crazy OUCH *yet* but it’s been steamy, and it certainly helps that I’m using the author’s “muse” for him (*whoooo* perfect!). I’m SO connected. And it has a real good MMA feel to it (the crowds, the entourage, the training). Plus, I’m especially loving his player side warring with his alpha need to claim. 😉 I’m at a nice stand-off part as we speak.

Mindy: I am so glad that you are finally reading this!! I loved it. Seth Marc…ooohhhh *dreamy sigh*

Andrea: I’m reading this one too and I love Seth!!!

Kristy : Finished this last night ad loved it! I wish I had her muse in my head while reading.

Tiffany: This was such a good book!! Looking forward for more from Skyla Madi!!

Amy: I Loved this book , it got better with every page !! Seth

Stacey: I just read this over the weekend, and loved it. I’m still thinking about it days later!

Kasey: Loved this story. I love that cocky fighter attitude. I’m actually trying to find more like it

Nicole: Started this one and LOVING IT!!!! Thanks Maryse, yet again!!!

And we get plenty of that angst between the two that want each other so badly but resist. Him, because 1.) He’s not looking for “more” and knows he’s bound to screw up (oooooh that always makes me nervous, especially with all of the gorgeous ring-girls that surround him)…

“…you’re the type of girl that can’t separate emotions from sex and that’s all I want from you.”

And her because she knows about his reputation and she’s afraid of getting hurt. He’s already warned her plenty. Her ex-boyfriend already did a number on her. Was she willing to fall back into another “player’s” trap, just to satiate her physical need for him? His words say one thing, but his actions…

…what’s he playing at? He doesn’t do girlfriends and for someone who’s worried I can’t separate emotions from sex he’s sure doing his best to work his way under my skin.

Plus, he’s got that personal self-loathing thing going on, and he doesn’t think he deserves her kind of “good”. And lemme tell you, worthy of love yes… but a pain in the a$$, too? Yes!! Mostly a heart of gold, but every once in awhile he turns into the biggest, most arrogant, hurtful jerk and each time he did, it broke my heart for the “other” person. You’re not always going to be on his side in this, and I enjoyed those moments that surprised me. I was almost… embarrassed for him. I understand this kind of persona in the ring, intimidating the opponent, riling them up with his cocky smart-ass mouth, but out of the ring? Ohhhh Seth, noooooo. *shakes head* Ick.

Still though, I crushed hard on Seth, and despite his *issues*, as a whole, he’s larger than life and I would have been an absolute mess over him in real life.

I don’t know much about Seth Marc, but I do know he isn’t what he seems. I know he puts on a hard front, but if tonight is anything to go off of, I’d say he’s not what he wants people to think. There’s a kind of gentleness to him… and I like it. I can’t have good… because I don’t deserve good. I smile to myself as his words play through my mind.

I liked her. She was goofy at times, and made some bad decisions, but inside, I “got” her.

And the other thing (one of the most important things) that makes this book standout for me, from a few of the “fighter” books I’ve read lately is that the MMA world constantly surrounds the reader and you feel immersed in it. I’m not just told he’s a fighter, and “hear” about his fights every once in awhile. We LIVE some of it, with him. The training, the “posse”, the rules (no sex before a match!! Whaaaa?), and the matches themselves. His pent up frustrations, his team’s demands and his pre-match jitters. Top-level fighter and yet, I was so nervous for him. I was right there with her looking on and cringing.

He winks at me and all I can do is smile back. Muscle bulges from Seth’s arm as he stick it in the air. The crowd goes wild. High pitched squeals, manly roars and naughty comments hurl in his direction. He looks back at me and flicks his eyebrows like he just proved something. I roll my eyes.

Oh sooooooo cocky. And yet I totally swooned at that scene. I could see him perfectly. *sigh* What I would do to be on the receiving end of that eyebrow. And every one of his smirks. Just look below (I linked up the author’s muse). You’ll get me. 😉

Two of my other absolute favorite scenes in the book happen during a HUGE televised event. Ah-mazing and SO exciting!! (For those that have read it, remember right before the event in his dressing room? *whoooo* Oh and when his music starts and he walks by and… right. I’ll stop there. 😉 It was as if I was there with her!!! I LOVED that attention to detail).

And there is a lot of attention to detail, where it counts. Maybe not enough when it comes to his personal history and why he loathes himself so much. I got a good feel for it (obviously – you’ll see), but I still think we missed out on some, and that was important.

Maybe all fighters have a sad story that compels them to fight?

But overall? Good writing, good pacing, good character development, and I enjoyed it! It even made me cry. Memorable scenes and heartfelt moments that I won’t soon forget.

P.S. And it certainly helped matters when I looked up the author’s “muse” and found this guy. Whoa. Reading with him in mind, seeing that smirk and that gorgeous face made me connect that much harder to him. 😉

P.P.P.S 😉 This is for Kasey who was looking for more books like this. My favorite “fighter” books so far? Beautiful Disaster by Jamie McGuire, Real By Katy Evans, and Defying the Odds by Kele Moon. I tend to measure all other fighter books to these. If you’re in the mood for intense romance with bad-ass guys that are at the top of their game, these’ll do it for you!!! “Consumed” did it for me, too. Not as intensely, mind you, but certainly one I’d recommend to those that love this alpha-male genre. 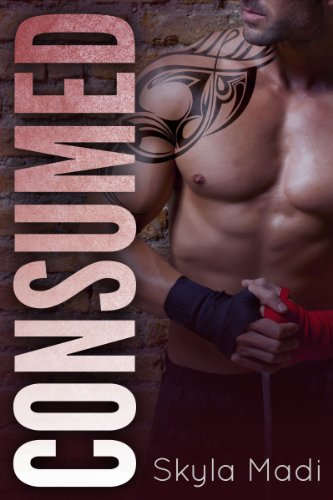 Um… Yeah. This was good.

Love your reviews! Is this book similar to Real by Katy Evans? One of myb favs!

I just finished Consumed. I really liked it. Not better – by any means- than Beautiful Disaster, but still found it hard to put it down. And it made me cry too. Very few books have to power to do that. This would be only my third time crying during a book. Edge of Never….I was sobbing.
The Dad, Rick was awesome. And Olivia….what a great character. All in all I would give it 4.5 stars, mostly because it had me balling but also for the steam-o-meter. Seth be thy name! 🙂