Defying the Odds (Battered Hearts Book 1)
Ohhhhh yes. ALMOST. Almost there, with this one. Just THIS close (I’m pinching my fingers together *this close* – see?) to squee’ing over him. He is SO close to making my top ten heroes, but I didn’t quite get enough of him to feel like I knew him that way, ya know? I think had there just been a few more quiet, intense moments, longer, drawn out “infatuation” period, I would have been wrapped up in him completely. But that aside, I still loved this book, because the moments that were there, were perfect.

But let me tell you. This was an ultimate find, because OMG he is his own kind of rock star… And not just any ol’ rock star. He is the ULTIMATE in his “rock star” world. Yep. The top of the top. Clay Powers (aka Powerhouse) is a a UFC fighter. And not just any ol’ UFC fighter (LOL!! As if there is such a thing as “any ol’ UFC fighter”). But in his case. He’s the heavyweight champion of the world. THE WORLD people!!! And not no l’il “welterweight” neither. Nuh uh. HEAVY weight. BIG HUGE hulking brooding mass of muscles, and he can take ANYONE down. *fans herself* THIS WAS FUN!!!

It seemed like the crowd screamed ten times as loud for Clay, and her heart was literally bursting with pride over it. Clay had managed to achieve this level of success. She was awed this many people not only knew who he was, but were excited just to see him.

And you know what made it so fun? Sure… of course, his big fight was exciting. We got to see him in his rock star world, in full force. An eye-opener for his love interest, for sure. The issues he faced during the fight, the issues that were plaguing him before, and what came next – LOVED every moment of it.

It felt like she had accidentally fallen into a relationship with a rock star.

Tee hee!!! YESSSSS! THIS is what I was looking for. That intense, “OMG you are more famous then words and you want little ol’ me” excitement. That realization. Of course, not in “groupie” form – although that book might be fun too, but like this. Just. Like. This.

Because you see, what made this one so special, was their meeting. Their quiet gentle sweet-as-pie (literally) meeting in his hometown (Garnet), that she (Melody) has just moved to.

Tina checked this one out before me, and she enjoyed it well enough, it seems. When I saw the premise, (okay, I mean, when I saw the words UFC Fighter in the synopsis), I knew it was for me. And as I was reading the very beginning, and awwwwwwwing and chuckling my heart out, I was thrilled.

‘Cause Clay, in all of his fame, riches and glory, doesn’t personify that image at all. Sure he’s every bit the “Powerhouse” that his nickname portrays, but he is quiet, moody, and introspective. There is no *flash* to him. He’s almost… humble. Sure, sure… he’s had his share of “groupie” moments, but that’s not what he’s about. And when Melody, the new waitress in town serves him his Thanksgiving meal at the local diner, and then offers him a piece of pumpkin pie on the house, I fell for him on the spot!

“But you hate pumpkin pie.”

Wyatt gave him a look. “Then why you eating it?”

“That new waitress brought it,” Clay explained, the reminder compelling him to take another bite. He choked, forcing himself to swallow it.

And pretty much… so did she.

While working one night and chatting with her boss:

“Garnet boys are a little too brass for their own good.”

“Yeah,” Melody agreed. “But you look like a good bunch to me. I liked that Powerhouse guy. He seemed like good stock.”

“What the hell sense do you have?” Hal laughed. “That boy’s meaner than spit.”

And while Clay has his own issues to contend with, she has a struggle of her own. She just escaped her abusive ex-husband and is in hiding. While she is working on her trust issues with men, she’s also trying to get her life together, completely alone. Arriving in town, with barely anything but the clothes on her back, she has much to catch up on. And she struggles greatly with her past (nightmares plague her), her present (struggling to make ends meet, working double shifts), and her fear of what her future might hold. She’s always ready to run. One foot out the door, because her ex is still stalking her.

Maryse: Clay is already endearing, trying to choke down pumpkin pie… Are you sure  you didn’t love it?

Tina: It was good.

Maryse: I’m adoring him, though… So far at least.

Tina: It was good – but I think the end was anticlimactic. Well – you’ll see but I like him a lot.

And ya know… gotta agree with that, a little. Perhaps had the whole second half of the book been drawn out a bit more, slowed down a bit, then maybe, five stars for me. It was plenty fine though. If anything, I would have wanted more. Definitely not less.

This was exactly what I’ve been looking for, so any of it (like this) that I could get, I was happy with. It tickled my “star-struck funnybone” for sure.

Plus. I love watching UFC. Oh stop smirking. Not just for that!!! Okay, maybe a little. Okayyyyyyyy fine!! Maybe a lot. But they are just so powerful, so skilled, so technical, so tattooed *blush*. What. A. Sport!! So to have a whole “UFC mega-star” romance book in hand, I was so in! And it was almost everything I was hoping it would be. And the almost… is simply ’cause it needed just a bit more (I dunno what? Intensity? There was lots of it. Emotional foreplay? ‘Cause the “getting-to-know-you” part was so heartwarming. More romance? This one was sure steamy. More time with the friends and the town? We got that too.) *shrug* I dunno guys. Like I said. ALMOST there to be *squee* worthy. Okay… maybe a mini-squee, right now? hehe.

After a few teasing hints to my Facebook crew, I ended off at 1am? with this (oh yah, did I forget to mention. I didn’t put it down):

Okay I’m done. I finished with a smile on my face. It might not have made me squee-crazy, but I enjoyed it big time!

➔➔➔  Love this genre? Browse more features and reviews of romance books that feature fighters on my blog. 😀 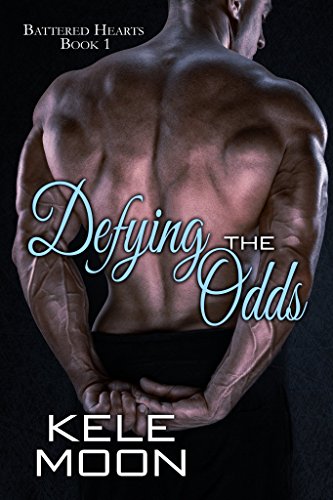 Clay was hot. That quiet, reserved, brooding, can-kick-your-ass-in-a-heartbeat with a flick of my finger kind of man we all love so much. I really enjoyed her secondary support characters in this novel. I see Wyatt getting his own book one day. He was funny, brass, cocky, and yet oh so vulnerable. I see him falling hard in a sequel. I just wished the BIG THING in the end was a little more drawn out. It resolved itself a bit too quickly whereas I would have loved another chapter of “holy hell OMG what are they going to do to get out of this one?” Still all in all a marathon start to finish read for me.

Yep. His type of character wins me over EVERY time. I can’t wait to see what else she comes up with, since his crew is pretty much just like him.

I’m thrilled you enjoyed Clay and Melody’s story. . . This is the first book in the series. . . Both Jules and then Wyatt will have their own books 😀

This review made me smile!! I hope you have a great New Year 😀

Hey Maryse,,wow seems like its been ages since Ive commented on your posts,,and I like the sound of this book, I love the cover, definately going to be writing it down for 2012 thanks
*hugs*

Did you hear that Maryse? Squee-quels??? Wyatt’s gonna be all “step back punk – I train with THE UFC W O R L D heavyweight champion bad-ass sherrif.” I hope he puts the smackdown on some idiot.

I’m so thrilled that there will be more. I’m hoping his contender will get a book too. 😉

I’ll be looking out!

YAY!!! I saw that you had tweeted… something. 😉 I can’t wait. I’m in need of more UFC’ish potential romance, or at least, to be back in that sweet town, where they are born and bred.

Oh wait… *hint hint* riightttt… I think I get it. And of course… that would be perfectly appropriate. 😉 Okay now I gotta *squeeeee*

This is gonna be great!! Soooooo…. not to stress ya out or anything… but do you have any rough estimate as to a potential release date?

I might have possible super human reading powers, nahhhh the book was just that good, I was in the “zone “I was so into it that some of my kids kept coming in asking me about food,drink, not real sure what I agreed to but when I got done the house was quiet etohhhhhh. Still cant get the smile off my face…..you found one!!!!!¡!!!