X
You are here: Home / My Book Reviews / Book Review – Cross Her Heart by Sarah Pinborough

Cross Her Heart: A Novel
The latest psych-thriller ARC that I was so excited to receive and it’s going live at midnight! You know me and my psych-thrillers. I can’t get enough of them, craving a crazy unputdownable mind-f**k, with a genius twist that makes my jaw drop. Those are the best!!!

And yes, this one did have plenty of suspense that kept me wondering what in the heck was going on (there’s no way I could have figured out that ending) though it wasn’t so-obvious-yet-so-cleverly-concealed as I had hoped. In fact, the frequent switching back-and-forth between characters, and timelines had me a bit confused, trying to catch up with what I just read, to what I was currently reading, and then back again. I was able to keep up, but had to stay so focused that I couldn’t just flow with it.

There was so much backstory being revealed bit-by-bit that when the true reveal… well… revealed itself, I wasn’t shocked… enough. It did’t hit me as hard as I was hoping.

Lisa is a single mom raising a teenage daughter and struggling with all the typical issues of modern life. An angst-ridden teenage daughter in the throes of “young-adulthood” with all the temper tantrums to boot. Stiff competition at work with the typical back-stabbing perfectionists trying to one-up her. Maybe even a new love interest. And the very best friend in the world that has been by her side for years (although she too, is hiding her own terrifying secret).

But Lisa has something else she’s been hiding. From everyone in her current life. Her very “past life” that she’s on the run from, once constantly looking over her shoulder, and carefully making sure nobody ever figures out where she is, years later she finally starts relaxing into her new “normal”. And who she is.

And when strange little happenings start cropping up around her secure and solid life (reminiscent of her past life), she suspects her past has come to haunt her.

The fear never truly leaves me. I’ve had lulls where I can almost let go of the past, but then a random moment like this triggers a panic and I realize it will always be there, like hot tar glued to the lining of my stomach. And recently I’ve had this feeling, an unsettled disquiet, as if there’s something off-kilter. I should see but I don’t.

This is where it all gets so confusing and takes us for quite the ride.

How much of it can be coincidence? Random events? None of it? All of it? Am I going mad?

And it’s when her daughter does an incredible thing (saves a young child from drowning and gets the attention of the media) do their very private lives become front row and center for all the world to see. And maybe even… recognize.

“Come away from the window.” A harsh rasp. Not me at all.

“What’s the matter?” She comes closer. I want to hold her. I want to tell her how much I love her. I don’t though. I can’t. Now now. Instead, I simply tell her the truth. I hear the calls outside.

“They’re not here for you.” I swallow hard as the world darkens and the noise drowns me and I surrender myself to it. All of it.

“Charlotte! Charlotte! How long have you lived here, Charlotte? Is Ava your only child?”
My world crumbles as if it had never existed.

You will think all sorts of things. It will even seem obvious. And maybe you’ll be close. But not… quite… there.

Is she in danger? Or is she dangerous? What exactly is she hiding from?

And that’s where I’m stopping this review. Lots of “stuff” is thrown in along the way to throw us off, but it all comes together in the end. There’re just too many details that are leaked slowly but surely that telling you any more will put ideas in your head that you shouldn’t even know about yet.

BUT!! Let me know what you think when you figured it out. 😉

3.75 stars <— It kept me guessing, but was so convoluted, that the things revealed (considering all of the characters) had me backtracking trying to figure out what was happening, which took away from the momentum.

I’m giving away a hard copy (my review copy) of “Cross Her Heart“!!!! —>
Just comment below, to enter (and better yet – let me know what your favorite thriller read is – I’m always looking for new recommendations) and by tomorrow 10pm, Tuesday December 17th 2019 – I will randomly select one lucky commenter to win it!). 🙂 I’ll contact the winner who will have 48hrs to respond with a mailing address, if not, I’ll select another winner.
OPEN TO U.S. 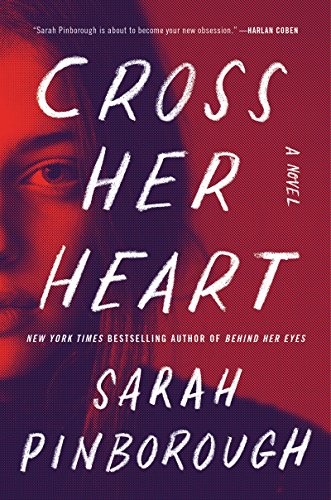 Great Review as always! Makes me want to read it! I am reading WHERE THE BLAME LIES by Mia Sheridan. I found out that it was not a good idea to start reading this when it’s late & your home alone. Someone was walking downstairs on the hardwood floor. At least in the book, but I kept telling that to myself. It’s only in the book! Wasn’t going downstairs to check!