Darkhouse (Experiment in Terror #1) —> I got it free on Amazon, and so far, it’s still free. Fantastic freebie!!!
Okay… I don’t know what exactly it is about this series (to be fair I’m only two books deep and extremely anxious to start #3 tonight) but OMG I’m hooked!! I can’t get enough. I don’t even need a break between books. Once I’m done one, I immediately want to movie on to the next. Like chips!! If I had the time, I’d probably down them all in one sitting. It’s fantastic, freaky and fun.

Monica: I just started book 5. I love this series!!!

Kristy: I love this series!!! Yes it creeped me out big time. I kept jumping out of my skin because I read it at night, alone, with it storming outside. Ok yes I was a chicken but it was so good I couldn’t make myself stop reading.

Lindsey: I read the first four in a week, then had to wait a month to get my hands on #5. Thanks for mentioning it on your cheap reads list on your blog. Loved them!

There’s something about it, that I can only call… “author magic”. It’s not like the twists and turns and eventual reveals are strokes of spectacular genius (although they’ve been entertaining enough in their own right). It’s not like the romance factor is steamy or off the charts, because so far there’s been barely a kiss.

Although, again, to be fair, it certainly  has PLENTY of that sexual/romantic tension between the two main characters that has me panting after this series. And not the fake eye-rolling kind of “almost” romance, either, where they are resisting just for the sake of resisting (and silly thought processes and whatnot). Nothing like that. No. These characters (Perry and Dex) are absolutely believable. Real, raw, personable, lovable. Her insecurities are mine. Her rash decisions… yah. I could see myself doing silly stuff like that. The very human and emotional way she thinks. I LOVED her!!! PLUS!! She wears a Mr. Bungle t-shirt to bed. Mr. Bungle!! Noooo? I loved them, once… *sigh* anyway… that’s book #2 I think. I’m getting ahead of myself.  😉

And Dex. Despite his amazing charm, wit, gorgeous face, easy smile, confident demeanor, well… he can be obnoxiously annoying, irritating and infuriating. Oh. And a bit scary. Sometimes even scarier then whatever paranormal angle is going on in the story. There’s something about him… that makes me nervous.

And her too… as she was “Facebook” stalking him, with her sister peeking over her shoulder…

What was most interesting about the pictures was that though his smile was very becoming, with his nice straight teeth and all, there was something unnatural about it. And when he wasn’t smiling, he was glaring at the camera with sharp, brooding eyes that were so intense at times that he seemed to be a different personal altogether.

I looked back at it. In this particular picture he was grinning like a madman, head tilted down, eyes like a falcon. With the Johnny Depp facial hair I could see where she was coming from. I felt somewhat embarrassed.
“Im not sure,” I replied truthfully.

Dex can go from somewhat protective and caring, concerned and amazingly sweet to OMG he DID NOT just say that! This is a typical “guy”. I dunno… a bit crude, rude, and full of arrogant attitude. But his occasional moments of insecurity, hesitation and gentle care show the reader that there is much more to this sexy, tattooed, pierced, thirty-something showboater. I am SO IN to get to the bottom of him (*giggle* but of course!!), and he’s so intent on getting to the bottom of her. Because there is a lot about Perry that… well. Let’s just say we still have plenty to discover.

The reader is privy to plenty in regards to both of these characters, through the eyes of the heroine, but yet… they both remain a wonderfully intriguing mystery.

Perry (that’s the twenty-something year old heroine) has a slight “dark” streak. Not so much bright and bubbly (like her fashion-forward sister), she has a penchant for metal music, the indie scene, black clothes. Not Goth, but you know.. not pink, either. 😉 Late one night, while her family is visiting her uncle, she runs off on her own to explore his old, boarded up light house. It gives her the creeps but she’s drawn to it and hopes to take pictures, and film stuff. She runs into “Dex” who is also filming it (without permission) hoping to catch some haunting in action. That’s when things go nuts and they capture plenty of spooky footage.

Over the course of the next few days, Perry blogs about her experience, presents the video on Youtube and it goes viral. Dex contacts her with an offer. She join him on his quest to make the next big internet show. With his experience in the industry (he’s the cameraman for a few other successful online episodes), and her sudden online popularity and writing talent, they could make something big! And that’s when Perry’s world takes a whole new turn.

I have to be honest, that thrilled me to the very core. I was never popular at anything, so to see so much approval and attention paid to something that I did, which featured me (and, well, this Dex person), was an amazing feeling.

From normal and boring, to exciting and dangerous. From pleasing her parents with a “steady” career, to following her dream and talent and obvious affinity to the paranormal. From single yet  safe to irrefutably drawn to Mr. Gorgeous yet possibly dangerous… maybe even more so then the ghosts she may have to contend with.

And this series is obviously their journey. Scary situations, creepy ghosts with eerie messages from beyond… and a budding friendship that should be based on truth and partnership, but seems to be seeped in secrets and mystery.

“… And the truth scares you.

He leaned in closer across the table and this time grabbed my forearm.

“You scare me, Perry,” he growled and gave my arm a sharp squeeze. “You.”

So yes, the paranormal plot is full of spooky frights. The characters keep throwing themselves into incredible danger for the sake of an internet show which will keep you on the edge of your seat. So spooky in fact, that I felt the need to share my reaction with my Faecbook crew:

Maryse’s Book Blog: I totally just put on Disney channel in the background while I read this, to help balance out the creepiness (quit laughing!!!). Hehe. Do not read this alone, in the dark, in a silent house. Or DO for maximum effect!

But what will keep you coming back for more, and thinking about these books all day while you’re doing whatever it is you do when you’re not reading… is the non-existent, yet SO intense, romantic potential between these two. So many sigh-worthy moments, and then plenty of grrrrrrr moments!!!  Oooooh that MAN!!! The longing stares, the fights, her slightly jealous reactions, his freak-outs, the poking and prodding showing the obvious heart of the matter, but their current circumstance keeps the two in line. Barely.

But that’s nothing to scoff at, ’cause… you remember how crazy we were for Barrons and MacKayla, right? The Fever series had lots of action, adventure and quite the mystery to solve, but nothing really by way of romance, book after book. Yet… it was THE MAIN part of the whole series, wasn’t it? We were in LOVE with them, things were so obvious and yet the author played us,  and played them for a long while before we all finally got some relief… remember? That delay was SO good.

P.S.: While I work on the review for book #2 (RED FOX which I loved just as much, especially all of that delicious angst-y tension…), check out the entire reading order guide: Karina Halle – Experiment in Terror Series Reading Order 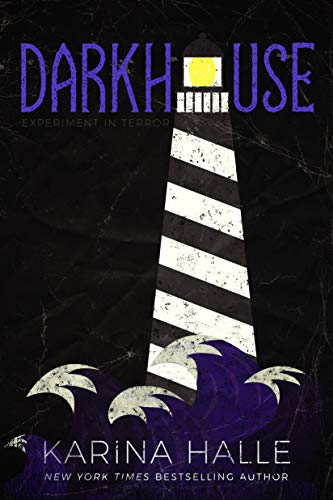 You had me at “free!” I am pages away from finishing my current read and scooted off to download “Dark House” as soon as I finished your review. I can’t wait to start (but maybe I should wait until morning….) Thank you for the great review, your blog is awesome!!!

I really enjoyed #1 and immediately started #2 when I was done, but my reading experience combined with #2… the two of them together had me hooked for sure!!

I really love this seriies. After reading the first five books I was sucked in. Can’t way for the sixth book to come out. I believe that the author said there will be eight books all together. She is also coming out with a book that will be filled with scenes from Dex’s pov. Can’t wait!!

And to tell you the truth… I am dying for one (even a “short” story) about what’s going through Jenn’s head.