Dead Sky Morning (Experiment in Terror #3)
Darkest, most brain scrambling one in the series so far. When I finished it I wondered whether I was ready to move onto the next, or if I needed a bit of “real” time to get my mind back in gear. Yep… it was as good as 1 & 2, but played with my fragile little mind a little roughly, at times. And yet, despite all of the eerie moments, all of the “voices” in my head (I mean her head), it was THE one that lead me right where I wanted to go, or at least, gave the potential “romance” angle a little extra push. 😉

Maryse’s Book Blog: … they are all I want to read this week. I don’t even want to stray off the series. Each book is exhausting in it’s own way, and yet I’m so hooked I barely want to take a break between them.

Tiffany: I started reading them when Maryse posted them on her blog!!! I was so hooked that I read them in the am. before work and in the pm when everyone else went to bed…Stayed up wayyyyy too late and Im bushed!!! I LOVED THEM!!!!! ;)))) Im also a very fast reader!!! LOL!! I ALWAYS take Maryse’s Advice in books!! LOL!! Thats why im taking a Book Break!!! Need to get some work done!!!

Maryse’s Book Blog: thats number 3 and I was gonna say something… but then I wondered if it would be spoilerish so… i just want to say I like very much, book #3.

Kristy: So Maryse is #3 better than the first 2?

Maryse’s Book Blog: Kristy… At times. 😉 but the paranormal part is really reeeeally exhausting in this one. My mind felt warped. But there are certainly moments of wonderfullness…

Kristy: Good to know. I had to break from the series after the first two from mind warp. Also the fact that my kids felt compelled to scare the bejeezus out of me constantly and laugh. I couldn’t put down the first two books. Between the creeps and my kids my nerves started screaming “Enough already woman, we’re hanging on by a thread here!”

And I knew “it” would be a HUGE possibility when the next “episode” (this book) required them both to spend a 4 day long weekend in Vancouver, camping on an island. Together. Alone. *blush* (and a mini squee)!!

But things aren’t flowers and sunshine as I was hoping they might be (before, and during the trip). Perry’s newfound popularity comes at a cost. The negative, hurtful, disparaging comments of some of her viewers are affecting her already low self-esteem, and Dex has his own new issues to contend with (while trying to deal with hers). Something “new” is bugging him, and yet again, he’s got more secrets he’s hiding from her.

I was getting the distinct impression that Jenn was a touchy subject this weekend, though I wasn’t sure why. Maybe they had a fight or something. I can’t say that didn’t tickle the back of my head in a delightful way.

Plus, she still hasn’t told her parents she’s been fired from her “real” job for putting too much time into this one. Along with struggling with yet another “date with potential death”.

… it really made me rethink my current situation. Mainly, did I want to be involved in hosting a “sh%tty” internet show about the supernatural when our very subject possessed the ability to not only hurt us, but kill us?

‘Cause this next assignment doesn’t bode well.  The island they’re camping on used to host “lepers” wayyyyyy back when. The ill were relegated to an island they could not escape, and grisly death was their only way out. You can bet there are probably some angry ghosts hangin’ around, bent on revenge. So WHO in their right mind would want to visit that very island? Our favorite ghost hunters, that’s who. And on her birthday weekend of all things. Sheeeeesh. Dex really knows how to bring on the charm. 😉 What!? Well… it was his idea to go there, after all!!

And what romance could I possibly be referring to, considering their chilly (November in Vancouver) & morbid surroundings? Well you know… the tension between them has been BIG over the last two books, and if the few hints of a developing crush, sweet conversation and deep gazing looks are are any indication, being alone on an island together *should* illicit some steamy scenes, no?

No, I mean, are you worried about being with me,” he said, straightening and flicking the cigarette overboard, ever though there was a cigarette disposal unit behind us. “On the island. Alone. With me.”

Well, I’m not going to give you any more ammunition for that train of thought (although… hehe. Nope. Not gonna).

But let’s just say that the island is a world of contradiction. From heartfelt moments & intense connection and revelations (even some that should never have been revealed), to all-out screaming matches and rage (mostly her. She’s a firecracker, that one)…

I looked at Dex. He was sitting as still as a statue. His eyes wide, his lower lip sucked in. The fingers on his right hand were shaking slightly.

I was torn between wanting to calm down and wanting myself to let myself be absolutely livid over this.

… to absolutely creeeepy situations, the reader experiences anything and everything. In fact… at times I started wondering what was real, and what might have been paranormal suggestion. Either way, no matter how intense the situation (good and bad), after a few of the encounters they had to deal with, I would have been begging to go home and to never film another episode again.

Dex or no Dex, I would have hightailed it out of his life if I had to deal with any more of that. Eeeeeep!

Okay wait. Ummm… hehe. Okayyyy. Maaaayyyyybe not. After all Dex *does* have his *swoon-worthy* moments. 😉 And I’m SO glad I’m on the other side of the page to experience them.

Oh and!! I’ve started an “Experiment in Terror Support Group” in the spoiler forum for those who have a need to discuss. After my reaction to book #4, I DEFINITELY needed some support.

However I recommend going there only once you’ve caught up with the series so far, so as to avoid spoilers.

P.S.: After receiving numerous recommendations for this series, I knew I had to put it up and look into it ASAP (prompting me into downloading the first book that was free on Amazon). The author in turn, sent me the rest of the series and I must say, I’m absolutely thrilled with it so far!! I haven’t devoured an entire series, all in a row, in ages. But I can’t help it with this one, as it just keeps getting better as it progresses. 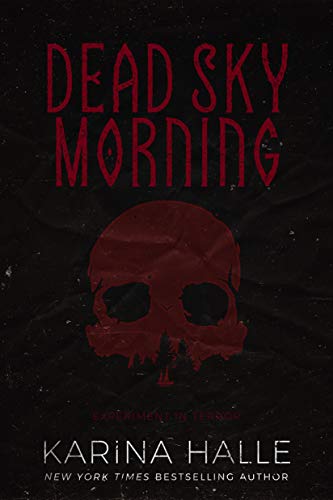 This was my favorite of the five books…. don’t know why just yet. Perhaps the intensity of the paranormal, the tension between Perry and Dex (the sex scene) being alone on the Island (except for all the ghosts and animals) Perry’s tenacity, Dex being thoughtful…. hmmm…. not sure. I do know I can’t wait till we get more readers reading this great series.

Mine is the next one (book #4). I LOVED IT ’cause of all of the downtime… and the personal intensity & reflection that was focused on.