X
You are here: Home / My Book Reviews / Book Review – Everything You Want Me To Be by Mindy Mejia

Everything You Want Me to Be: A Novel
Highly recommended by my two book twins (we’re actually book triplets) ’cause they knew this one would be right up my alley, combining TWO genres that I love (a thriller/mystery & a forbidden love story), and it was good!!!

Amy: Everything You Want Me to Be? GAH! That book bruised my heart left its mark on me. …FEELS!!!

Tasha J: Amy, I finished Everything You Want Me to Be and it was fantastic! All consuming, don’t wanna come up for air, 5 Stars! I was on the verge of messaging my rage to u on GR towards the end. Totally thought I had it worked out a couple times. Lol …gave me all the feels and mystery and thrills

Amy: Maryse, I saw on the other post you’re reading Everything You Want Me to Be. That book. *OOMPH!* I was heartsick by the end. That one paragraph I posted before…and the letter…oh, my heart.

Tasha J: I hope you’re loving Everything You Want Me to Be, Maryse. That one hit me hard. In fact, it was why I couldn’t get into the book I read right after.

The prologue hooked me hard, but I was confused when the book started with… the end (especially considering what I had just read in the prologue).

I wasn’t sure where it was going to take me, but a look through past and present, via multiple POVs, slowly pieced the puzzle together.

Hattie was a high school sweetheart, and popular amongst her small town. Raised by loving parents, stable from start to finish.  Beautiful, starry-eyed, an extrovert, and highly intelligent. And while she hung out with the “cool crowd” she was a head above them all in regards to her talent, and her intentions for a bigger and better life.

I knew exactly who I was – for maybe the first time ever – and exactly what I wanted and what I had to do to get it. It was clarity. Like waking up from a dream where you thought things were real and then feeling the actual world coming into focus all around you.

But she had secrets. Not only was she a master at manipulating certain situations to her benefit, she was head-over-heels in love with her High School Lit Teacher. A man that was feeling rejected and alone in his own marriage.

My Mary, my sweet and generous, vintage-loving, apple-cheeked Mary looked at me like I was some annoying stray begging for scraps.

And it’s when Hattie’s body is found, stabbed to death, that the real “Hattie” comes to life. Who she was outwardly. Who she wanted to be.

My only hiccup? Two actually. I just re-read the prologue and I’m struggling to tie it in with the story as a whole, timeline wise. It set me up for a certain “idea” that I was suspecting would be a crazy reveal and well… I was wrong.

Oh and… ehhhh… I’m not a huge “police procedural” girl. While I like mysteries, I always prefer to uncover and reveal them piece by piece via the villain or the victims eyes, and there was a lot of investigating in this one.

Still, all of the rest of the more “personal” chapters (the actual story, and how it all played out) kept me turning the pages.

Amy: It’s really good but the chapters from the sheriff’s POV, however informative, are slowing things down for me. I just don’t care for detective/cop POVs most of the time. BUT the murdered girl and teacher’s POVs are GREAT.

And yes, this was an actual print book that I read, and I devoured it in 2 days!

I kept guessing right to the every end… and I was wrong!! 😀 Did I hope for a more clever-crazy twist? Considering the prologue – it seems I misunderstood it, so I was expecting something crazier. A reveal that would shock and awe me. And while the reveal was much tamer, it still surprised me, so I’m good with it!

P.S. I can’t tell you what I was “hoping” the reveal would be ’cause now that I think of it, it would have been absurd and way too out there, but you know… the “absurd and out there” has been cleverly done before, so I kept expecting…. *ahem* My lips are sealed. And now I’m embarrassed that I even went there. *snort* 😛

But then again… had it GONE where I thought I was clever enough to dream up, I would have had the ultimate OOOMPH & probably 5-starred it. 😉 Gah!! I wish I could tell you what I was thinking… But y’all will probably be like… “Whaaaaaaaa???!!! How did your mind even go there?!!”

P.S. Thank you to the publisher for sending me a review copy!

I’m giving away a hard copy (my review copy) of “Everything You Want Me to Be” by Mindy Mejia!!!! P.S. I’ll remove all my orange tab-things (those are the parts I wanted to highlight in my review).
Just comment on my blog post review to enter (and by 10pm, Sunday December 8th 2019 – I will randomly select one lucky commenter to win it!). 🙂
OPEN TO U.S. 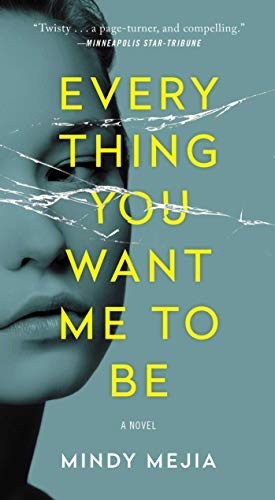 So glad you loved it! And that you couldn’t put it down either. I’m dying to know what you had thought the reveal would be!

Okay I’ll think about posting it in the comments here… it’s over the top but it would have been so awesome.

Thanks for the chance. Sounds superb.

I’m excited to read this, love the combo of genres! Thanks for the chance!

This looks like a good one. Wish someone would send me a copy🙈

This sounds like a good read and totally up my alley. Cant wait to read it. Thanks for the review!!

Sounds like something I’d love. Leave all those orange tab things though, I think that would be half the fun of reading it 🙂

Thanks for the chance!!! Would love to read it!!