Extinguish
<— 266 pages!! Really? I thought this was considered a “short story” and I was SO impressed with how much emotion and meaning was packed into a book that really hooked me for a good few hours. But wow. It was longer than I thought, which means I must have really been enjoying it for me to have read it as fast as I did.

And I loved it.

Joanna: That was my reaction to this book as well…

Maryse’s Book Blog: I was liking it well enough, but kind of uncomfortable and all that. But what. An. Ending!! Whoa. Love!

Maryse’s Book Blog: Oh! I know what it did to me. It haunted me. It’s haunting me. Yah, that’s it!

Gloria: Amazing cover. I just bought it. Thanks for the suggestion.

Melissa: I agree with feeling uncomfortable. It sticks with you though. Extremely captivating and interesting!

Cathy: I just bought it too! Will read your review when you post!

Kim: Oh I can’t wait for your review! I have it now I really want to start it like now!

Kat: Loved this book and of course I fell in love with the ‘bad’ guy

Maryse’s Book Blog: Ahhhhh I can really delight in a bad-guy, Kat.

Caroline: I loved this book. Waiting the sequel…

Kat: Yay a sequel I was def hoping for one! Can’t wait

I knew I had to read it because this was from the fabulous J.M. Darhower, author of my beloved “Sempre Forever” which I loved with all of my heart way back when I was first starting in the indie-book world. But this wasn’t to be anything like “Sempre”. No “New Adult” bad boy feel/dark unconventional romance here. Oh wait. I take that back. YES!!! Plenty of dark “unconventional romance”. In fact, this is the ultimate in forbidden love and I squirmed with discomfort, worried that lightening would strike me with every ooooh and ahhhh that I breathed.

Lucifer appeared sturdy yet harmless, his dimpled half-smirk almost friendly. With just one look, one measured curl of his lips, he invited you in to stay forever. And there was no denying this charismatic creature.

And then I started telling my husband about it (yep, you know I’m likin’ it when I follow him around reciting parts) and he was allll…. “I don’t know if you should be saying that…” and I was all… “eeeeep! I know, I feel SO bad!!!” looking up again for those lighting strikes.

And then I thought, wait. If J.M Darhower wrote this before Book Bash, and I saw her there alive, and well, smiling and signing, then you know. I could read it and feel it, and surely not have any repercussions, right? *sideeyes the thunder clouds rolling overhead* Oh come on!! It’s fiction. *squeaks* fic….tion?

Eeeep! I don’t really have sympathy for him. I promise!!! He’s evil.

Darn that awesome author that makes me feel things!!!

But I couldn’t help but power through it without putting it down once, and by the end I had goosebumps. It wow’d me. Made me go whoa. It made my heart tug low and bounce right back up again, and I knew THIS was what I had been craving, even if I don’t normally reach for the “paranormals” these days. Especially ones about fallen angels. I’d always been a vampire-girl first, Weres second and angels… well. Okay fine. I’d read those, too especially if they’re mixed in with the vamps.

Okay so what’s it about? Well it’s got all of that “paranormal” mystique but it has that intense connection and a lesson or two learned. And not just by the “obvious” choice.

God and the angels above are of course waging war on Satan, but when “Serah’s” brother “Samuel” becomes a fallen angel, she is tasked to confront Satan and request he cease his temper tantrums and be a good boy! Er… well… I “sweetened” it up a bit here. 😉 She doesn’t want to take on this job (and really doesn’t seem to have the skill set for it) but she is told by her “higher-ups” that God has requested this. And she’s an amazing angel. An incredible soul (or whatever angels are)…

And so she goes to tentatively make contact with “Luce” (aka “Lucifer”) and deals with his infuriating ways. And sometimes his sad ways. His lonely ways. His evil (and oh so scary) ways. And *gasp* (cringing here)… his sweet ways.

This was his Hell: the inescapable torment he endured alone. He craved silence but was awarded chaos. Instead of light and vitality, he existed in utter darkness. His Archangel nature helped him take it all in stride, but it was never easy, even for the one the world saw as the enemy.

And that whole “tempting the devil” or the devil tempting her (you’ll see….) comes into play.

“Maybe I’m just misunderstood, and you’ll never know because you refuse to have an open mind about it.”

She scoffed. “You expect me to believe you’re the good guy?”

He barked with laughter. “F%ck no. Never think that. I’m not the hero here, angel, and I don’t want to be. But I’m not that bad guy, either.”

Eeeeeeep!!!! *sticks fingers in ears and squinches eyes shut* “Lalalalalalalallalalalalaalla…. I don’t see that. I’m not internalizing any of it!!!!”

Heheh. But of course, I did see that, didn’t I? I read it in one sitting, afterall… and I reluctantly felt every single moment that the author intended me to. GAH!!! It was hard on me, bein’ raised a Catholic and all. *sigh*

Wow. What a story! If you’re open to a paranormal/ “Sympathy for the Devil” read, this is for you! Yeah that’s right. That song played in my head the entire time. GAH!! Again… fictional sympathy. Never real. 😉

But the end. OMG… the end. Chills.

And the chills? 5 stars all the way, baby!

Sequel? Maybe (and not necessary but I’d certainly read it!!) Author J.M Darhower says: “A sequel is possible, but I’m focusing on wrapping up the Sempre series first” 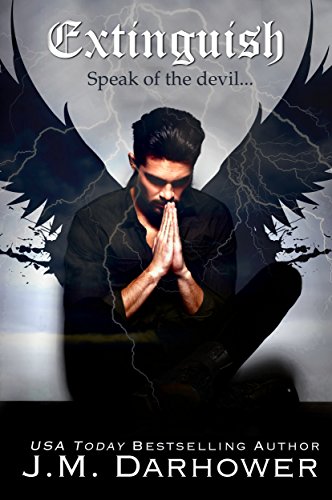 I have this downloaded and because I LOVE the author and met her at your BB – I really want to read it – so with your review I will definitely move it up on my TBR!!!
Thanks!!!

Speaking of fallen angels, does JR Ward have a newFallen Angels book coming out this fall?

Terrie – I am Almost positive there is one coming out soon – because I do Audible and I actually believe I saw it on there for a preorder…if not there I saw it somewhere…I am excited to see what happens with Jim..

PNR from author of Sempre?! I need this in my life!!!

Ok Maryse- I will admit that I rarely read your full blown reviews, I skim through it, so I won’t be “swayed” until after I read the book And then I go back. This review has me hooked on this book, but also VERY scared! I want this book now so badly but again…scared! No lightning bolts from the sky, right? Sympathy for “he who shall not be named”……hmmmmm
Now I am totally sold!!!
Still scared though!!

Beware of those thunderclouds… 😉 Tee hee!! This’ll make you squirm…

I agree with Annie……Maryse, I was laughing out loud reading your review…your comments and reactions were great! Getting this book now even though I’m not normally into the paranormal “romance”. Thanks for the recommendation!

LOL!! My pleasure. Make sure to come back and let me know if you got freaked out. 😉

OMGoodness!!! I am going to purchase this now! How can I not after that intriguing review…LOL Sounds great for a weekend read!! :)~

So I decided to go with “safe” and read her other book Sempre first ( because it’s been on my TBR list forever!!)
OMG…..just read the first chapter…please tell me this gets better , I am really frightened now and a little sick!!
Is Extinguish this scary/ dark?
Wow, what have I gotten myself into? I might need to watch a Disney movie after this to settle my mind!!

Annie – it is a Mafia book…and it is VERY intense, BUT worth Reading!!! Sempre was one of MARYSE’s “top” choices…and I definitely agree it is GREAT and different from ANY other story I have EVER read!!!

WOW! Just wow!! I started Extinguish just a few hours ago I simply could not put it down! I cannot BELIEVE I was rooting for the bad guy.shame on me

YAY!! I’m still thinking about it…

Just finished Sempre, got over my fear…..Kim thanks for the encouragement!
WOW…..loved it so much ….I can’t wait to jump into Extinguish! You are all saying such fantastic things about it!

LOL I love this review Maryse! Will definitely give it a try! You’re my only source of book recommendations and I always loved ’em! Thanks again! 🙂

How did I miss this? I saw the 99¢ and JM Darhower, and 1 clicked. It helps that the lowest any of her books would get from me is 4 stars. This… Geesh. I couldn’t put it down. I bought it less than 4 hours ago and I’m done. So many emotions,gah! Tomorrow, Reignite for sure.

Thank you SO much Kline!!! Let me know what you think of it when you’re done. 🙂

Omg thanks again for another wonderful recommendation. Both books are so good (great cover too). After I was done reading Reignite, I sent the author a message begging her to write more PNR. Sempre is up next on my TBR list and guess who recommended it? You of course, like always. Thank you!!