I loved this author’s other book (Method 15/33) so I was REALLY excited about this new release when I found out about it. I love stories about people on the run, in hiding, and especially when it involves children (and she has a knack for writing creepy-ish yet clever teens).

Such an intriguing blurb, and the reviews were promising (for the most part – but it seems this one may have been better as an audiobook!) so I dropped everything and jumped right in. Unfortunately, in the last half to last quarter of the book, it seemed I was dropping the story, and doing everything else instead. *sigh* I hate when that happens.

Nay: …I finished Gretchen. That is one strange, wild book! And it got even more wackadoodle as it progressed. I’m still thinking on how I want to rate it. It took a while for the story to get going in an understandable way. It didn’t really drag or anything–it was just kind of confusing. The last 30-40% was great though. One minute I checked to see how far I was and it said 63%, and then it seemed like no time at all had passed and I was at 93%.

What’s crazy is that I absolutely loved the first half. I was so into it, the writing, being in the main character’s head as she tried to adjust to her new surrounding yet again, praying that this time, they would stay… while trying to connect to her distant mother that was constantly on the look out, mistrustful and deeply stressed. And then they meet an odd father-and-daughter duo that they rent a small cottage from.

That’s when things go from thrilling and eerie (I was SO excited to see where it would take me – I already had so many questions and guesses) to full-on crazy (and that’s when I kept putting it down, so annoyed, and discombobulated but not in a fun way).

Nay: Maryse–are you still reading Gretchen? I’m wondering how it is as far as keeping the reader’s interest in a form other than audio book.

Maryse: I’m struggling to finish “Gretchen” (that psych-thriller – I loved the author’s other book so I was sure I’d love this).

It just went tooooo crazy. I enjoyed the whole first creepy half, but it’s like the author threw the entire kitchen sink at it in the last quarter. I’ve been reading tiny bits since about 70% and keep putting it down. I think I’m at 90% and still can’t finish it. But I can’t DNF it at this point. Right?

Wayyyyy tooo much crazy happening in it, and from various angles. I just can’t believe it. I mean psych-thrillers aren’t supposed to be wholeheartedly believable, but they are supposed to be clever… this one doesn’t feel that way.

Tasha J: Oh, I hate that! I read one (not TOO long ago) that started off one way and threw in WAY to many other things as well towards the end and it just felt like a mess. I was very annoyed/disappointed.

Nay: Maryse–I was hoping this wouldn’t be the case for you and also wondered how reading would be a opposed to listening. If I’d read, I might have DNF’d it, but I didn’t want to be too negative about it, jic it was an ‘it’s me’ type of thing. Bummer.

Lucy and her mother have been on the run since she was a baby. Constantly traveling to different states, staying for a few months to a year at a time and running again as soon as her mom feels like they’re being watched again. They can never get close to anyone.

The reason? Lucy was kidnapped by her biological father when she was a baby, and when her mother got her back, she ran with her, and never looked back. Knowing her prestigious father’s family was searching for her and trying to take her out of the country had her mother looking over her shoulder at every turn forcing them to change their names, appearance, and even having Lucy wear contact lenses to change the color of her very unique violet eyes. Which meant a lifetime of just the two of them, no real social contact, or friends, and no real stability. Ever. And Lucy is desperate for “normal”.

And yet again, after being recognized by someone they thought was a stranger,

putting her mom into a panic…

“Dammit, Lucy. You know better. Now we have to leave tonight. You should have kept those sunglasses on. And why would you look at him? Why engage?”

I have no answers.

“I should never have stopped homeschooling you. Never stopped keeping up my guard. These trickles of us out in public together are too risky. No more.”

So here we go. Here we go to pack and run at night and leave messages full of lies for the people in our tenth state, as we head for our eleventh.

…they run from their current home, and eventually find a quaint cottage for rent on a secluded and vast piece of property in a small town. The owner, a single father to his young teen daughter – Gretchen (about the same age as Lucy) is all too willing to rent to them, however he has a few “rumors” he needs to clear up first.

And so we start the tale of two families hiding secrets from each other, walking a delicate tight rope trying to keep the secrets at bay, while “appearing normal”.

I think she must be lonely, but unlike me in the sense I mostly don’t mind being alone, and I usually find a Jenny to sit with in silence at lunch. Maybe Gretchen needs me more than I need a friend. Is that even possible? And with her living at the top of the hill, she’s a built-in, convenient friend, and I wouldn’t have to concoct all those lies to avoid get-togethers and weekend sleepovers with other potential friends.

And let me tell you, weirdo-bossy Gretchen is all too willing and desperate to let Lucy into her very strange and creepy life (and hobbies).

“Ugh,” Gretchen says, breaking into my awkward silence. She’s standing in the doorway; I’m staring out the window to the big oaks in the picnic field of the out beyond. “I know. I know. I sound like such a nerd. I’m sorry. I don’t have a lot of friends. I totally get it if you ditch me. You seem really cool. I’m totally out of your league.”

Literally nobody is out of my league. I have no league.

Maybe a friend or…

“Nobody wins when I want something.”

She leans in. “I always get what I want,” she says, staring at me.

She turns back around and continues on. I consider walking backward to the front door so I can go home. So I can escape, I start to think.

Lucy now struggles between wanting to stay and grow roots in this town, to wanting to run as far away from Gretchen as she can.

But Lucy has her own daring wiles, and feels like she can beat creepy-Gretchen at her own game.

Sounds great, right? And it was… for the first half (to about 60%) But as the reveals kept coming, the whole thing just went off the deep end.

From the multiple (and very important) characters that shared the same names… but then were called by other names? (??) to developing a few different plot twists (and horror stories – depending on the characters) that were coming to light, to the full on crazy-train horror scene in the last half (and you know I love scary stuff – but this mostly exhausted me). I couldn’t wait for it to be over so I could “know” what happens.

So… I struggled to stick with it. Forced myself to finish because I had come too far to just quit. I was desperately hoping for a stroke of clever genius to make it all worth it. Make my jaw drop and make everything com full circle (and it sort of happened) but the crazy-train chaos overtook it all. Just a whole chaotic free-for-all, for me… for the sake of making a crazy story, even crazier.

And the reasoning for why certain things happened, the truth to the rumors, the reason some characters were the way they were, their actions… all the various “bad guys” past, and present… the whys?? Some stuff was just… what it was, and not really a clever gasp-worthy AHHHH-NOW-I-GET-IT… twist. Unless I missed something? Could be, as I found myself skimming the crazy to get to the clever stuff.

Eh. I didn’t buy it. It was just so… out there. More crazy than clever. And what I love about psych-thrillers is when they are just as clever as they are crazy. This wasn’t it, for me.

3 stars <— 4 stars for the first half, and 2 stars for the second half. Although I will note… that the very very end (I guess sorta the epilogue) pleased me. 🙂 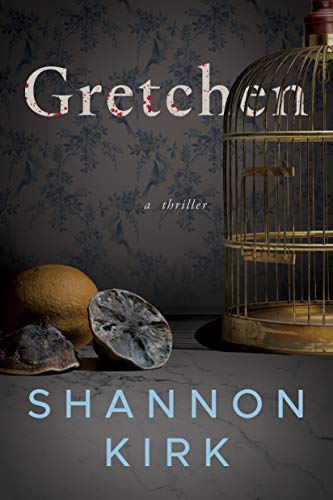