Harder: A Novel (Caroline & West Book 2)
This was a great sequel to the book that had me absolutely on edge this week, in love and in emotional angst! Book #1 (Deeper) set my heart on fire, and gave me a perpetual stomach ache, and had all of that realism that I crave in “new adult” novels, but alas… it left me in a heartache lurch.

And Harder (this book!) twisted that knife in my gut just a little harder. A little longer. And for a good portion of the story. 😉

Aimee: Thing I loved most about this book is how genuine Caroline and West felt as people. I fell into “being” each of them within seconds of the shift in POV. Too real!

Bobbi: Good luck with #2. Just sayin  Super interested in your perspective on one particular part.

Julie: Bobbi I know EXACTLY what part you’re talking about and I wanted to see what Maryse thought too!! <— side note from Maryse… GRRRRRR THAT PART!!!! YESSSSS. I was so curious as to what you guys were referencing and yeah… ROAR!

Tracie: I’m reading Deeper right now and I can’t get over how good the writing is. I’m so hooked

MichelleS: LOVED IT!!!! Book one and Book two

BEWARE!!! Stop reading this review if you haven’t yet read Deeper. I won’t spoil anything exactly, but… you know. Things might be said, or evaluated that you shouldn’t know yet. 😉

I can’t tell you much of what it’s about, other than it’s a continuation of their angsty love story. It picks up a few months after #1 left off, and both main characters are still struggling with personal issues, life plans, loyalties, and the monkey-wrench that their unexpected romance threw into the whole shebang.

Except this book’s focus is mostly on West’s life, his personal trials and his attempt at reigning it all in… but at what sacrifice? His own. And Caroline’s.

“You shouldn’t have come.”

I’ve already thought the same thing, but it hurts to hear him say it.

*sigh* West, West, West… such a bad boy and yet such a good guy. But boy can he inflict an enormous amount of pain. On her, and on himself.

…he’s hurting badly, and his hardness is the only defense he’s got.

That “OH NO HE DIDN’T!!!!” Kindle-throwing kind of pain. A serial self-sabotager, his self-worth is next to nothing (and when we get to “live” in his old life with him for awhile, you’ll see why). If you ask him? What he wants is irrelevant in comparison to what he feels he “needs” to do.

But even though Caroline’s heartache is solid, she’s a fighter through and through. The things she has learned in the last year, and has to overcome this year, have just made her that much stronger. More determined. More resolved.

He’s so much harder than he used to be. All this armor between him and the world. I want him to know that I see it there. I know what it is, and if he wants to take it off with me, he can.

And while her resolve does crumble at times (remember that Kindle-throwing pain I was talking about?)…

I’m sinking, and I don’t have to talk to him.

I don’t have to do anything.

…well… let’s just say that their subsequent growth and journey is well worth every page turn.

And sure, while it didn’t make me ache as hard as book #1, I found it to be a solid follow up! More story, more growth, more background, more crazy… and best of all, more love. But boy do we all have to work for it. 😉

Does he feel that, too? He must.

It’s right there between us, that knowledge, that love song our bodies never stopped singing.

These books were brilliantly written. Brimming in emotion, steeped in reality, and gracefully explored. I grew along with them. 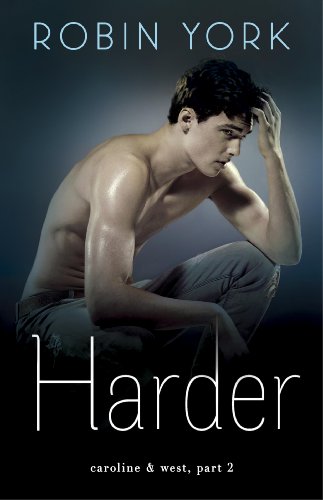 I’m a little sad to let them go. These two books were such a joy to read. I sincerely hope that the author writes more in this genre.
I think I fell so hard for Deeper that there really was no way that I’d feel the same about Harder. It was close though.

Yep, me too Bev. She did an awesome job, and Deeper really blew me away.

I’ve been meaning to ask. Everyone seems to have read both books and agree that the first was slightly better. My question is, does the first book end in a cliffhanger or in some way that it is not completely resolved? Does the second book HAVE to be read to get a sense of end of story or is it more of a “don’t want to leave these characters” feeling that made everyone pick up book two immediately following Deeper?

Great review Maryse! I loved both books and will definitely miss West and Caroline!

Yes Fabi the 2nd book has to be read. And is WELL worth it. 😀

Thanks for the clarification Maryse. Adding both to my tbr. 🙂

Maryse, great review of a beautifully written series! Loved it! 🙂

I loved this series and I’m kind of hoping she writes about Krishna and Bridget just so we can keep hearing about Caro and West. I finished these two novels in one day, my fiance was hating me by midnight as I hadn’t put my kindle down, but it was worth it. Great series.